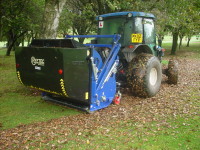 Stand Golf Club, Whitefield, Nr Manchester, knew they needed a heavy duty flail collector to clear leaves all around the course, having used a sweeper collector in the past Head Green keeper, Steve Hopkins knew he needed a flail collector to mulch the leaves which in effect gives the machine a much greater capacity than the old sweeper

"The existing machine just wasn't up to the job" said Steve, and asked loca1 dealer G M Burrows, John Knight, who recommended a Ryetec Professional flail mower collector. A demonstration was organised which proved the machine up to the job, but an unexpected bonus was that the machine Ryetec demonstrated was the new High Lift version of the Professional collector, which is much lighter and less complicated than the older model and thanks to that the machine can easily be used fully mounted on most compact tractors with no trailing wheels which can damage the turf and make the machine less manoeuvrable, and of course being less complicated means it's cheaper! The new machine also benefits from the same compact dimensions as the standard ground tip machine which means it follows the undulating ground conditions without scalping.


The collection of leaves on what turned out to be a very wet day was outstanding, but the ability to then tip straight into a waiting trailer means much less travelling over the course to tip, saving time and ground damage through reduced traffic. Steve was so impressed an order followed quickly and he is now the proud owner of one of the first Ryetec P1600CHE machines in the country, which is high on lift, low on price!