0 New Greens established whatever the weather

Peter Tulk, Head Greenkeeper at Long Sutton Golf Club in Somerset started building his new green in October and was laying the 450 sq. metres of Lindum LTI washed turf supplied by Martyn David of Premier Turf, (Lindum's area distributor) by the end of the month.

"The roots knitted down within two days and after five weeks you couldn't have pulled it up," he recalls. "We mowed within three weeks to 10mm, cut and rolled twice a week for the next three weeks and then the weather changed. The weather was awful. It was February before we fed it." 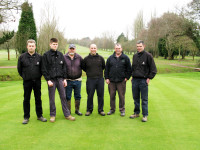 Peter's friend of nine years, Dan Harden, Course Manager at Cardiff Golf Club would agree. Having laid washed turf, also supplied by Martyn David of Premier Turf on a new green during the mild weather in December 2007, he experienced rapid root development and was cutting it in the first week of January.

This year was different. "We laid a new green with washed turf on 6th December and the ground was frozen 70% to 75% of the time until just after Christmas," he remembers. "In January, once the ground had thawed out the washed turf rooted in two weeks. It had lain dormant for almost a month! I must admit it was a bit nerve racking and the grass lost a little bit of colour but once the ground temperature rose the roots went down three or four inches."

Dan, who had befriended Peter, putting him up in his caravan when he was a 16 year old trainee at Celtic Manor where Dan was greenkeeping, originally used washed turf to avoid root break. "With conventional turf the roots go down until you start cutting and reducing the height of the grass," he explains. "They don't want to go further down and you get root break. With washed turf there's no soil so the roots want to go straight down into the new root zone."