by Lee Williams
in Drainage & Irrigation, Golf, and Aeration
on 18 Aug 2020

Looe Golf Club in Cornwall featured in issue 85 of Pitchcare magazine. In the article, Mat Edwards told us of his desire to replace the club's thirty-five-year-old irrigation system - which was pretty much obsolete. Back in the area recently, Lee Williams took the opportunity to catch up with Mat and see what progress the club has made. 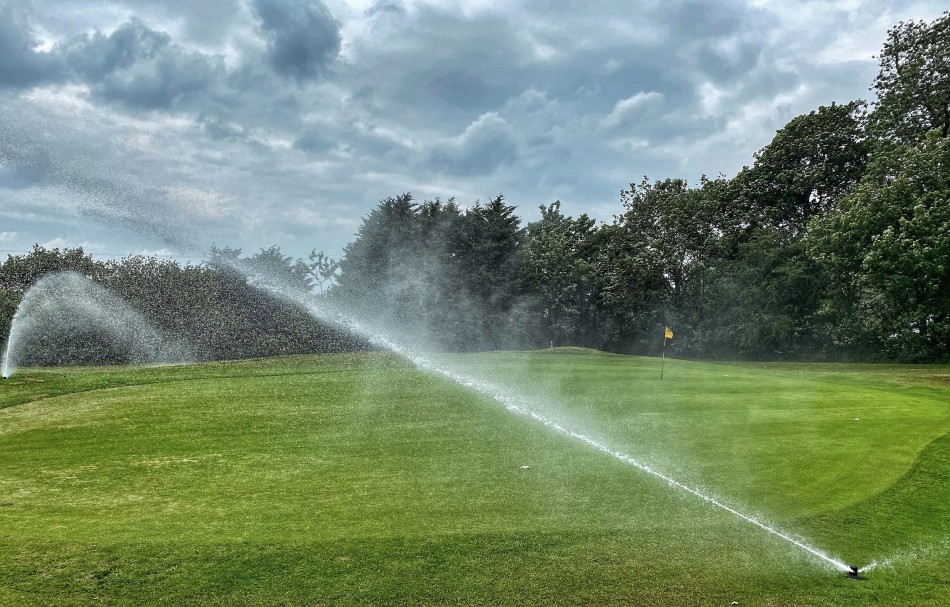 Over the past six years at the club, Mat has worked tirelessly to bring about some huge improvements to the course - which has not been unrecognised by the club's members. However, he claims that perhaps the biggest impact has been the result of the new Hunter Irrigation system which was recently installed.

For some reason, within the last two years, the old system had gone through three pumps at a cost of £2,500 each and broken down during the droughts, which was less than ideal. When we last visited, just over twelve month ago, the owner had agreed with Mat it was time to look at replacing it. The club had already had an appraisal from Irritech, and Wesley Henshaw, National Golf Sales Manager from K.A.R UK Ltd, was due in to give his advice.

Mat starts by telling us that a lot has happened at the club; some things good, some bad. The good - Mat had the go-ahead to install a new Hunter irrigation system and a lake surface aerator. The bad - he has suffered heavily on his greens with leatherjackets.

Why did you decide to go with Hunter and what system was fitted?

"I knew that the previous system was just not up to scratch," he said. "Some sprinklers wouldn't work, there were a few leaks and I could not rely on it at all. Considering the prolonged periods of drought we have been experiencing over the past couple of years, it was imperative that we had a good irrigation system. An appraisal on the system was carried out by Irritech Limited, and they basically condemned it."

It was at this point that Mat met with Wesley Henshaw from KAR UK - distributors of Hunter Golf Irrigation who was introduced to the club by David Bevan, Amenity Specialist at Agrovista Amenity. After being impressed by Wesley's product knowledge, Looe Golf Club purchased a new system consisting of Hunter G885 Decoder-In-Head sprinklers to be controlled by the Hunter Pilot CCS PC-based central control system. 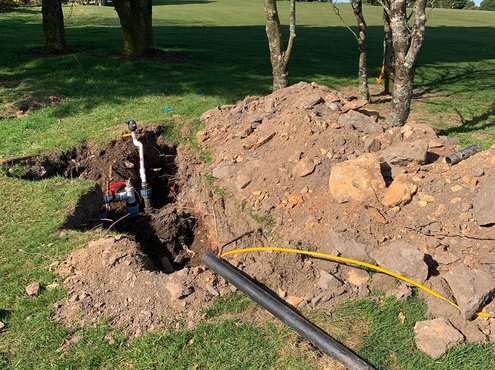 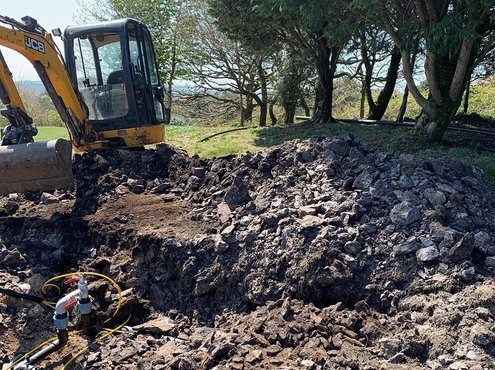 The G885 sprinklers boast one of the highest torque outputs on the market. With this, the gear drive will push through anything that gets in its way. With such a powerful core, an array of efficient nozzles, and true full/part circle capabilities, the G885 is relied on by many turf managers. Throw in the convenient serviceability of Total Top Service (TTS) and Decoder-In Head (DIH) technology, and you don't just have the most powerful choice in rotors, you've got the most intelligent choice as well.

Who installed the system and did Covid-19 halt progress?

After a competitive tender process, Rob George from Full Circle Irrigation Ltd was the only one to take time and conduct a proper interview with us and subsequently won the contract. One of the other firms had someone on holiday in the area who popped in on the off chance to have a look. It was thick fog and driving rain, and we never left the greenkeepers sheds. The other two did it from there offices up north, so it was an easy decision for us to go with Full Circle who were also the most reasonably priced.

Covid-19, in a way, did us a favour! We had no one in the way whilst the installation was undertaken, and we had the course to ourselves. Luckily, the contractors were able to carry on with the project through lockdown as they were installing a water system, which is classed as essential maintenance - otherwise, they would not have been allowed. However, they have to reduce the number of staff working on the project and they had to stay on-site in caravans.

Did the contractors face any obstacles whilst installing the system?

It was supposed to take three months to install, but it ended up being nearer five. This was due to the weather, as we experienced a lot of heavy rainfall and we had a few issues with large rocks. Also, with shipping effected by the pandemic, parts were difficult to get hold of. Overall, despite these obstacles, I would say it went surprisingly well. 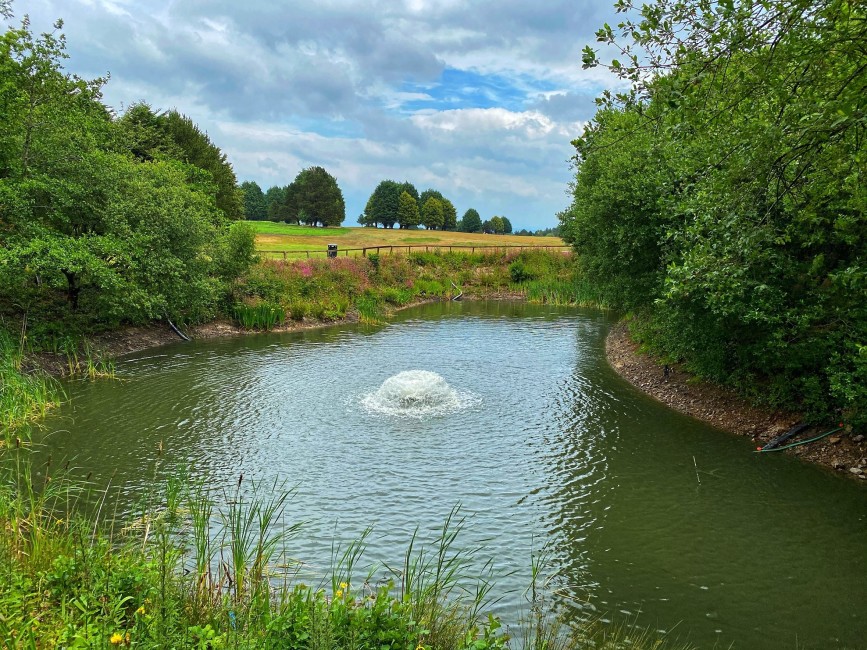 Why did you add the Kasco 4400 HAF lake surface aerator to the package?

Basically, I have been going on about this for years as the pond from which we draw most of our water from was murky and horrible. Initially, we were going to put a fountain in which was £6000 - £7000. Then, Wes recommended the surface aerator and told us of its benefits. I got a quote from David Bevan for just over £2000, so it was a no brainer in the end.

The Kasco high performance surface aerator pushes high volumes of water into the air which increases the overall health of the water and keeps it thoroughly mixed. These self-contained units deliver up to 3.0 lbs of O2 per horsepower per hour of operation, making Kasco surface aerators the most dependable and efficient units on the market.

Now the system is fully fitted, what advantages have you seen so far?

The system has had an instant impact and is already making a difference. Within two weeks the grass on the greens had grown and lushed up more than I could have expected - and this was in a period where we didn't have any rainfall for six weeks.

It's in a different league to the old system, which was installed in 1984. These sprinklers really are powerful. The course here is very exposed because we are situated so high up, so I was worried about drift. But these sprinklers are not affected by the wind - the nozzles ensure that the water goes exactly where you want it to. Furthermore, I can control the system through my phone so I can even operate it at home.

One of the main reasons for purchasing this Hunter system was to try and improve the greens and now they will be stronger through the summer and healthier going into winter. It has been worth every penny as far as I'm concerned. 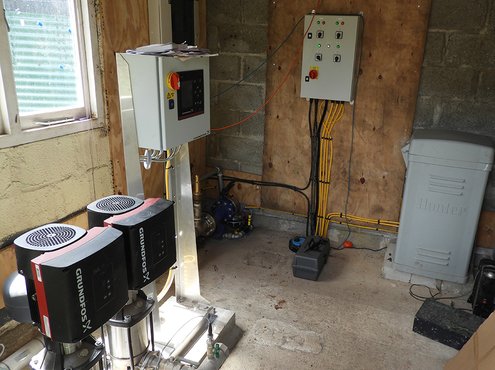 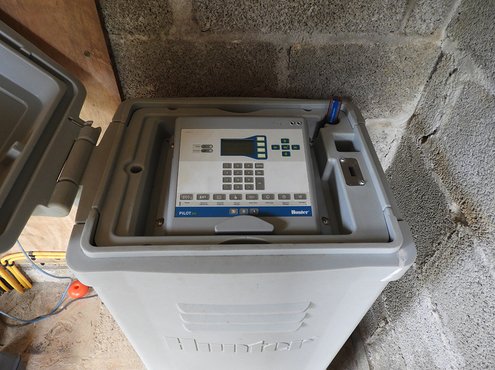 How have you managed to bring your greens back from the significant amount of damage they suffered from the leatherjackets at the end of October 2019?

Fingers crossed, we I think we have managed to get ahead of the problem! Previously, no matter what product we used, it was never going to be enough to keep up with the amount we had. It was so bad that we couldn't set the burglar alarm system, as they were setting the sensors off! It was horrific - you could not see through the windows it was like some sort of biblical plague.

We have spent a lot of money on grass seed, and why I have seen a lot of Matt Gresty, Amenity Sales Manager at Limagrain UK. We have had to invest in our own dimple-seeder to overseed the greens. In December 2019, we first overseeded with Limagrain's MM50 Perennial Ryegrass mix which is fine-leaved and is tolerant to close mowing, which helped us gain a quick recovery. They were then covered up to aid germination and we applied a mix of seaweed and biomass sugar. In May, with advice from both Matt Gresty and David Bevan, we overseeded with Limagrain's Designer Elite Greens; a mix of Browntop Bents. The pandemic has also helped with recovery, as no golfers were on them for months and they are now getting back to their best - if not better!

For more information, contact Wesley on wesley@karuk.com or visit www.karuk.com.

Designed by six times Open champion, Harry Vardon, Looe Golf Club is set in an area of breath-taking beauty. The panoramic views from the course are stunning; to the east are the peaks of Dartmoor and the Tamar estuary, to the south, Looe Island and the channel, to the west and north, glorious countryside and Cornish moors. The 18-hole course measuring 5,940 yards provides an excellent test of golf for all abilities.