The original course at Hartley Wintney Golf Club dates back to 1891 when it was laid out as a traditional 9 hole parkland course. An extra 9 holes were added in 2000 to offer a well laid out variation of both traditional and new designs. 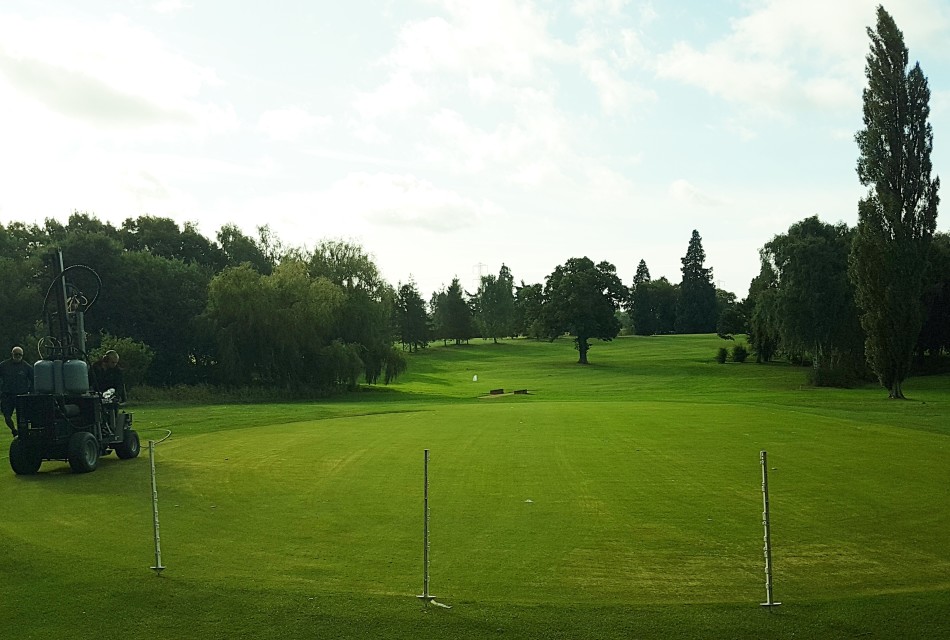 Whilst the new holes and six of the original ones have sand based greens three of the old soil greens, what became the 11th, 12th and 17th, were retained and these date back to when the course was first built. The 17th, for example, is a lovely Par 3 protected by a channel of trees and a small green. As one of the original holes, it is regarded as a gem and most peoples' favourite hole on the course. The original greens, however, did have a drainage problem and in winter particularly were holding onto too much moisture.

To alleviate this, for both aesthetic and cost-effective considerations, Hartley Wintney GC called on the services of Terrain Aeration. The greens are cut using a John Deere 2500E, which reduces triplex ring with exclusive offset cutting units, and a Baroness LM55 Pedestrian. Prior to the Terrain Aeration treatment, a Verti-Drain was used with 12mm diameter tines to a depth of 250mm to open up the surface and allow the compressed air to escape during treatment. A Toro ProCore was also used to remove thatch from the surface. Following preparation Terrain Aeration moved in with the specialist Superscamper Terralift deep penetration aeration system, working two metres apart, to blast air at 18 bar pressure to break up the compaction and panning.

Where the ground is exceptionally hard the specially incorporated JCB hammer drives the probe down to the one metre depth, where it releases the air blast, followed by the injection of dried seaweed. This serves to maintain the aeration to get oxygen to the grass roots and continue to relieve compaction as the seaweed swells with moisture, keeping the fissures open. The compressed air exits through the previously created Verti-Drain slits.

"The greens were back into play immediately," says Matthew Rolls, the club's Course Manager. "One green needed a little levelling to deal with some high spots but that was to be expected. We then backfilled the holes with Lytag and topped up with rootzone. The two guys from Terrain Aeration were very good, exceptionally helpful and a pleasure to have on the site."

Terrain Aeration have been treating golf courses, sports pitches, amenity areas, trees and gardens for over twenty-five years using the Terralift deep penetration aeration system and have a long history of testimonies to the effectiveness of the treatment.