by External source
in Industry News
on 03 Feb 2014 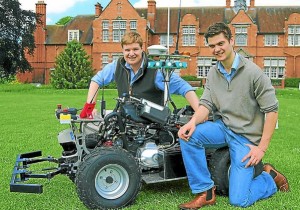 Miniature robots will soon be capable of carrying out many back-breaking jobs around the farm, including weeding and harvesting, according to an expert from Shropshire.

Machines which are capable of doing agriculture jobs with millimetre accuracy are just around the corner, says Professor Simon Blackmore, head of engineering at Harper Adams University near Newport.

They will be able to do delicate and complex tasks that have not previously been possible with large-scale machines.

Professor Blackmore said: "The trend on farms has been for machinery to get bigger and bigger and we have got to the stage where farmers are using huge tractors for small tasks.

"But up to 90 per cent of the energy going into cultivation today is there to repair the damage caused by machines."

Professor Blackmore said innovative approaches will help meet the challenge of feeding a growing population, which is expected to boom to nine billion by 2050.

Some of the technology being developed at The National Centre for Precision Farming at Harper Adams includes laser weeding and an autonomous sprayer which can identify between weeds and leaves and only attack the weeds.

But it doesn't stop there. There is also a "lettuce bot" capable of removing weeds from around the base of plants and a "wine bot" which patrols vineyards and carries out precise pruning.

And there is also selective crop harvester which harvests crops to buyer specifications.

Professor Blackmore said: "Up to 60 per cent of crops are not of saleable quality - so why harvest it?

"Crop robots might also mean we can keep value on the farm - grading, packing and sorting all at the point of harvest."

He said special laser zapping machines could radically reduce the amount of chemicals being used.

Professor Blackmore said: "Laser weeding can heat up the growing point of the weed and make it go dormant.

"This could reduce chemical use by 99 per cent."

Professor Blackmore said many of the machines were already developed and under research, but were not yet commercially available because of lack of demand.

He said: "All of these concepts have been researched and developed, but not many are available through what the machinery manufacturers say is lack of demand. How long will it take for UK farmers to take advantage of these new opportunities?"

One piece of technology already being used by farmers is aerial drones which give them a bird's-eye view of their fields.

About 40,000 farmers from around the world descended on the East of England showground for the Lincolnshire Agricultural Machinery Manufacturers Association (LAMMA) show this week.

Technology on show included a British-made drone and a machine called "Robocrop", which has a digital camera and looks down at the crop as it moves forward.

The images are analysed by a computer, which quickly decides whether what it is seeing is a weed or a crop.

Tiny blades then remove the weed, leaving the crop to flourish. The thought of robots patrolling Shropshire's meadows will not sit well with some - but farmers and the government believe that it is the future and Professor Blackmore does not believe that it will necessarily lead to a reduction in jobs.