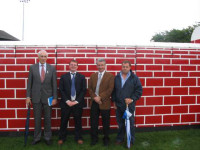 The redevelopment of the Royal Dublin Society arena has been hailed as a major success by both RDS management and competitors at last week's annual RDS horseshow. Considerable media interest was shown in the new surface, which was specified and supervised by the STRI Ireland team of Richard Hayden and Ian McClements. RDS president, Dr. Austin Mescal, said that the riders described the ground as "Perfect" with some international competitors describing it as "The best in the world". Such feedback will ensure a host of top international riders will continue to compete at the RDS arena in the future. CEO of the RDS, Michael Duffey, also commented on the positive performance of the arena in its first year.

The project itself was a challenge. STRI had been working on the inception and detail of the project over a year before construction, with the brief being to develop a customised state of the art showjumping surface which would also accommodate rugby matches and concerts; all within less than a year. After competitive tendering, the contract was awarded to Clive Richardson Limited from Armagh. The pitch construction involved removal of the topsoil, grading of the pitch levels, installation of a drainage carpet and irrigation system followed by the replacement of a carefully specified soil and sand profile. Work commenced in September 2006 with the first concert in May 2007. Richard Hayden, STRI lead consultant for the project explained "Seeding a new pitch in November caused some raised eyebrows but the RDS had full confidence in the team and our expertise. In this job you deal with the elements and whatever nature throws at you; it's about making decisions. Five concerts and over a thousand horse jumps later the arena is holding up well. It's been great to work on such a challenging project".

Richard was on site yesterday overseeing surface preparations for Leinster rugby, who will make the RDS arena their new home next month with over 30 games planned for the arena this winter. STRI has secured its top position as pitch experts in Ireland, with its work on the Croke Park Surface in 2007 being well noted by players and press. STRI are also consulting on the development of the New Lansdowne Road Stadium Pitch.