Toro irrigation products and mowing equipment will continue to both water and cut the turf at the world's most famous tennis venue, Wimbledon.

This follows the renewal by the All England Lawn Tennis and Croquet Club of a three-year double partnership agreement it has with Toro for both its irrigation control system and fine turf mowers. The two parties have been associated on the irrigation side for 20 years.

The new agreement upgrades the level of technical support Wimbledon receives via the Toro National Support Network (NSN). Its new 'Optimum' level cover entitles the west London club to a new premium-specification computer, and peripherals, to be upgraded every three years.

For head Groundsman Eddie Seaward (right), this is the most important element of the irrigation part of the new contract. "Over the years our Toro irrigation system has got bigger and bigger and reliability is an absolute must," he explains. "The critical balance of court irrigation, getting the moisture levels and hardness spot-on, is very complex and if, for example, we have a breakdown during The Championships, it could be catastrophic.

"We have absolute confidence and trust in the Toro system, and with enhanced NSN we are covered as we expand over the next few years. Certain aspects, such as fault identification, are particularly impressive and there is always help as soon as we need it, online or at the end of a phone.

"It's very important that we continue with SitePro because it's been so successful for us," adds Eddie. "It isn't complicated at all and is very easy to use. So much so that anyone can operate it with only limited training."

The upgraded SitePro system incorporates all the latest software, including TMAP, which is a program that takes a GPS image of the entire site and imports it into the computer. TMAP allows the creation of watering programs, assigning and unassigning stations to programs visually on screen, as well as the ability to globally adjust station run-times. The software will be up and running at Wimbledon next year. 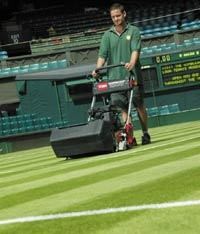 During The Championships, Eddie and Wimbledon's water engineer Rob Austin are almost always needed in several places at once. So the fine-tuning of court irrigation can be a logistical minefield when the courts are in play. But thanks to SitePro's hand-held radio remote control, watering at the end of the day has also been made a lot easier.

"The system allows us to control irrigation on individual courts from the court itself," says Eddie. "Rob can go down to a court as the players are coming off, assess the turf and use his remote control to start the sprinklers straightaway at the end of a day's play. It's a huge time-saver."

The new agreement also means that Toro's Greensmaster 1000 pedestrian greens mowers, first introduced at Wimbledon in 2000, will continue to be used to cut the courts for The Championships for the next three years. Wimbledon will receive four Greensmaster 1000s in each year of the contract.