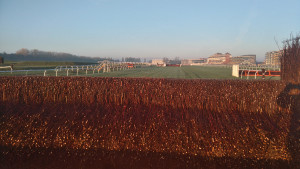 Newbury is a racecourse of contrasts. From high octane Al Shaqab-sponsored flat racing giving clues to classic winners to one of the best loved and longest-established national hunt meetings featuring the Hennessy Gold Cup. And from views over farmland by the round mile start to the cutting-edge architecture of new housing developments abutting the grandstands.

By embracing diversity and change, independently-owned Newbury is assuring its future in times of uncertainty for racing.

A joint venture with property developer David Wilson Homes has seen two new apartment blocks spring up - named after racehorses Carruthers and Chatham - plus the relocation of the Rocking Horse Nursery to a state-of-the-art new building and, more recently, the replacement of a tired stable-lads' hostel with the Lodge, also used as a 36-bed public hotel.

"We had to move the Estate Yard from that area of the site, but this gave us the opportunity to build an improved facility," explains Clerk of the Course Richard Osgood. 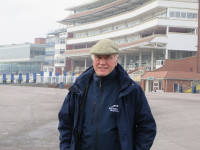 This is something of an understatement. The large, secure compound features a six bay L-shaped building which houses machinery and fence materials, bunkers for maintenance materials, plus additional containers for loose items such as spare rail.

An open fronted, wide boarded barn at the end of the building stores birch for steeplechase fence building in the dry whilst allowing air to circulate.

CCTV cameras guarding the site are monitored on a screen in the head groundsman's office, and the complex also includes a spacious, heated mess room for the grounds team.

Major machinery servicing is carried out by local dealers and a whiteboard shows service reminders and points needing attention for every item of kit.

There is a purpose-designed washdown area with a sump which leads to a Hydroscape Systems Biochem 2000 water treatment plant; the diesel tank is also in this area so that any spills may be caught. 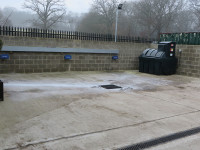 Three Briggs irrigators - the largest of which can cover 36m - can be stored under cover or outside.

Mainstay of the machinery fleet are a pair of Jacobsen HR9016 wide area mowers, with the older model now deployed for rough cutting, such as in the centre course.

"They are lighter than tractor mounted mowers and very easy to use," comments Richard. "We recently had a test drive of the latest version and we like it very much, it's even lighter and has plenty of power, despite its smaller engine, which uses the latest emissions control technology."

Tractors play a vital role however, with three John Deeres and a New Holland in the fleet, all shod on flotation tyres to minimise their impact on the turf.

A John Deere 5310 has been paired with the newest addition to the armoury, a McConnel PA4745 side arm mower. 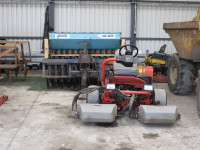 "As well as the racecourse, we are responsible for the maintenance of the public area of the housing development and this little side arm is ideal for tidying up banks and ditches. All of the controls are electronic, so it's nice and neat."

The John Deere 5410 was something of a bargain, being sourced from a farm where it was surplus to requirements, and does essential duties with a loader, although a Kubota digger is also available for materials handling.

The nine-hole golf course in the centre course was recently closed due to falling demand, but mowing machinery has been retained for deployment on fine turf areas such as lawns - with the cut heights raised!

A Sisis Hydromain tool carrier and its various attachments could also come in handy, suggests Richard, such as for pencil tining fence take-offs and landings.

Used as water bowser, a Major tanker towed by a tractor is an invaluable tool for dust suppression on the dirt service road and preventing dust clouds. 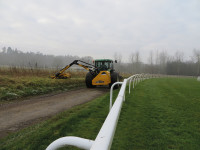 Racecourse buildings reflect the evolution of the sport and the demands of its audience. The central grandstand, built in 1993, retains a traditional elegance, whilst the Hampshire Stand, originally constructed in 1966, has been refurbished and extended to offer a large glass-fronted restaurant. The newest stand is the Dubai Duty Free Grandstand which was built in 2000 with a further 500 seat restaurant.

A vast tarmac area in front of the stands gives crowds of 18,000 at the flagship meetings - such as the Al Shaqab Lockinge fixture - room to view racing from close quarters, have that essential bet and socialise in dry underfoot conditions. It also provides space for the post-racing concerts that have become an essential part of many tracks' revenue.

In 2015, a new phase of developments began, with the construction of an impressive approach road bridge over the Great Western railway. Five more apartment blocks are being constructed on the eastern side of the course, along with a Nuffield Health centre.

The final phases are the construction of a new building which will house the racecourse offices, plus the Newbury Club, an owners' and trainers' facility, and upgrading of the pre-parade ring, to be completed by the summer. This will include new saddling boxes. 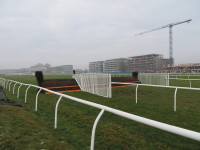 A new electronic big screen is also in place and has the capability to rotate so that it can show promotional messages outside the course as well as racing coverage within.

Throughout all the developments, the familiar layout of the track has been preserved and continues to provide the amount of racing surface needed to run racing every month throughout the year.

The only real upheaval is where construction traffic has needed to cross the horse walks from the racecourse stables to the parade ring - the surface has to be dug out and is reinstated the day before each raceday so as to avoid contaminates in the woodchip.

Still, the challenges remain as for any racecourse grounds team, and at Newbury's recent mid-January meeting, a sharper than anticipated frost meant that racing only got the go ahead at midday for a 1.15pm start.

"If a severe frost is forecast, we use fleece covers and can protect the whole course if necessary - we were the first racecourse in the world to do this," explains Richard. "I prefer the light fleece to heavier covers as they can stay down for long periods without detriment to the turf. It's more labour intensive to take covers up than to put them down, but we simply cut them up into small sections and dispose of them." 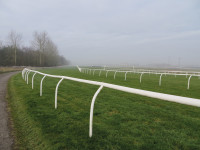 Agronomist Alan Lewis is new to the team and his fresh eye has observed that the turf and soil is in generally great shape, with thatch the only concern.

"A certain amount of thatch is desirable as it helps to keep the turf together, but it needs to be managed. We are looking to verti-drain less on the flat, and just decompact the top three inches, making use of a Shattermaster and our slitter. Direct drilling to overseed the turf strengthens the sward and is key to our renovations," comments Richard.

A straight ryegrass mix is preferred for the jump courses, but Alan and Richard are looking to add strong creeping fescue and hard fescue to the flat to put some 'base' into the sward.

With separate flat and jump courses, renovation can take place in the 'closed' season for each, although parts of the flat track may be used to give more flexibility for jump racing.

"But we come off the flat track completely in the new year, so it has plenty of time to recover before the first flat fixture in April," he adds.

The dry autumn in 2016 took the track into the winter in good shape, but life has not always been so easy. 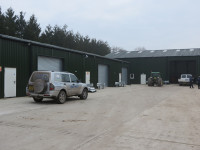 The flat track was drained in 2002-3 at 7.5m intervals. There is a clay seam on the far side, so it has been criss-crossed with gravel and sand bands at 1m spacing. Despite the construction around the courses, this has had no effect on the drainage. However, continual rain will defeat even the best drainage and, in spring 2016, the wet conditions accounted for the April flat meeting.

"We had a late jumping fixture on 1-2 April and we were actually concerned that it was going to be too dry for that, only to lose a flat meeting two weeks later in the month!" says Richard. "Yet, in September, we had 70mm of rain overnight, changed the official going to heavy and in the end raced on soft."

Judicious mowing also helps to boost turf health, helping it withstand stress and resist pests and disease, he suggests. "We don't cut too short - a longer sward is more resistant to frosts and drought and can make better use of rainwater or irrigation. The flat track is cut to 10cm and, in the season, the national hunt tracks are at 14cm, which also provides more of a 'pad' for the horses' hooves."

An Opico grass harrow also helps to stand the sward up as well as taking out further debris. 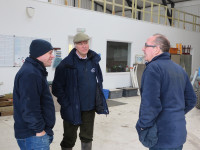 Head groundsman Steve Robinson is looking into minimising compaction on the track, avoiding rolling as much and regularly spiking.

Steve, who has been at Newbury for fifteen years, leads a team of eight, plus a Stable Manager, and the squad fields plenty of experience with tractor driver Barry Mason having worked at the course for thirty-eight years and fence builder Scott Midwinter for twenty-one years. Richard Osgood has also been at Newbury since 1979 and lived on site at one time, so the grounds team is emotionally invested in the course.

And they certainly embrace change - many courses exist cheek-by-jowl with housing, but there is a feeling of responsibility for the neighbours at Newbury.

"We try to start work away from the western end of the course - when the staff are irrigating in the summer, they can be in at 5.30am," explains Richard. "We also keep the blowers away from the housing on raceday clear-ups, and our sweeper is a big help in clearing up as it is quieter. We are looking at electrically powered equipment to minimise our impact further."

With new sponsor Ladbrokes announced for the former Hennessy Gold Cup and the Winter Festival meeting as Pitchcare went to press, it's clear that the industry, as a whole, is also very much in favour of how Newbury is building its future. 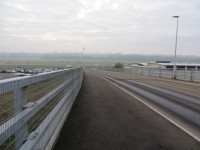 Summer 2015: development of the new Rocking Horse Nursery and the Lodge

Racing to continue as normal throughout!