by Izzy Cutler
in Battery/Electric Power, Machinery & Mechanics, and Golf
on 31 Jul 2020

Toro's long-awaited all-electric game-changing mower arrives at Newcastle-under-Lyme Golf Club and brings with it the technological advances and peace and quiet course manager Ian Beech has been dreaming of for years. 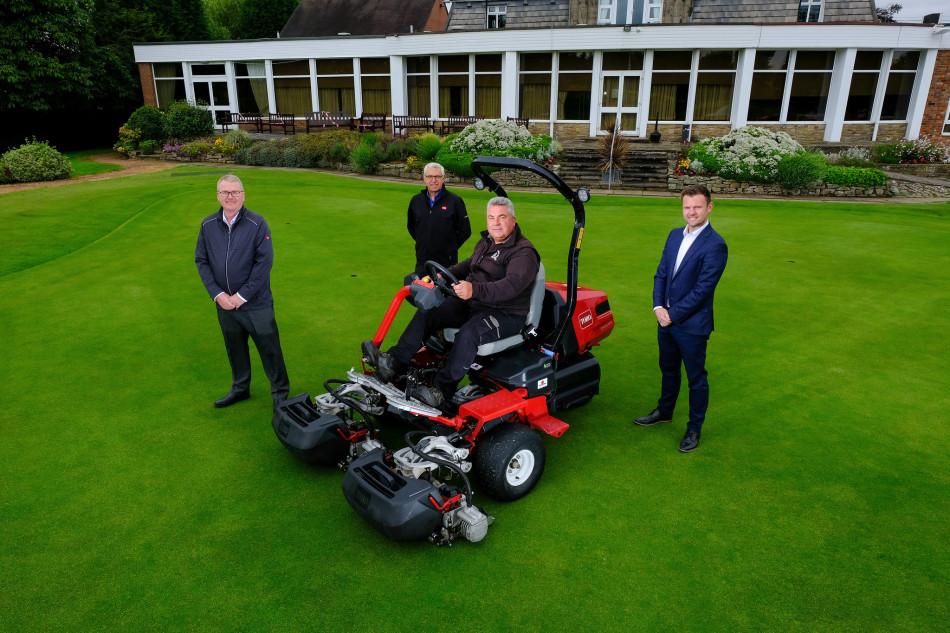 It was six years ago that Ian first heard about the battery technology in development during a visit to Toro's headquarters and R&D centre in Minneapolis. He says: "Seeing the prototype and hearing all about this game-changing technology really captured my interest and I've been waiting for the day we could get our hands on one of these machines ever since."

That day arrived in late spring and the Toro eTriFlex 3370 has exceeded expectations for Ian and the six-strong team: "One of the main selling points was that the battery could mow up to 20 average sized greens on a single charge. Incredibly we've been getting up to 56 greens done! Even with accessories such as the grooming brushes on the cutting units we're still getting 38-40 greens done!

"We've been a Toro club for decades so we're fully aware what the brand delivers in terms of quality and innovation and this is the future. You're told on a clear display screen what's left of your power supply and it gives enough warning so that wherever you are on the course you have enough power to finish the green you're working on and get back to the shed.

"We racked up 90 hours in the first five weeks, we charge it overnight and as yet haven't noticed an increase on our electric bill." But as Ian goes on to tell us this may not be a factor soon: "We're looking into installing solar panels on the shed roof, perhaps in time there will be no reliance on the main electric supply at all to power the machine."

There is also the impact being fuel-free has on the total cost of ownership (TCO) of the machine, as fuel can comprise up to 15 percent of the TCO: "It's much cheaper to run so far, fuel is such a big expense and the cost of diesel can fluctuate, so it's good not having to factor that in," Ian says. "There's a guarantee on the battery so no worries there and to be honest we've yet to find fault with the machine."

It's been 40 years (his tenure at the club and in the industry), that Ian has been waiting for the kind of peace and quiet the eTriFlex 3370 delivers. It is, he says "absolutely silent", enabling the team to be more productive and extending the cutting window: "We can start work earlier near the residential areas, we can cut during the day if need be around the clubhouse and the members don't hear us doing so."

As Richard Beech, club manager, agrees: "Having this machine means we don't have to choose between being responsible neighbours and preparing the course for our members. It is unbelievable just how quiet this machine is, it means we can cut the greens in the very early hours without disturbing the houses next to the course. It is very exciting to be the first to have the new electric mower and pleasing that our members are seeing the benefits."

Ian continues: "Words can't describe the difference this machine has made going around the course. It gives something back to those who operate it. Without ear defenders and no machine noise we can hear the birds sing while we mow, and often see and work alongside the deer. I just can't stress how much it has exceeded all our expectations. One of the reasons so many of us get into this business is because we like being outdoors and close to nature, this machine makes the experience of being a greenkeeper better and put simply, improves the day."

To think Ian had two options available to him 40 years ago. Go down the coal pits or become a greenkeeper: from fossil fuel to future fuel, two very different paths! Ian says: "I was a keen golfer and had actually applied for membership at the club when the post became available. Instead of being underground, I was outside in the fresh air every day!"

When he started, there was a limited shed of equipment: two tractors, some Flymos and a couple of triple mowers, and with each passing year as Ian noticed how the demands on the course were getting greater, he soon struck up a relationship with nearby dealer Cheshire Turf Machinery to help him develop the course into one of the most consistent and fast in the area.

"I always attend the shows to see what's available and network to learn from other people's experiences," he says. "It's for those reasons I'm confident we have the best combination working with Cheshire Turf Machinery and Reesink and using Toro. Add to that having the right staff, the right training and a progressive club who continues to invest in its future and the result has been an increase in membership as the country comes out of lockdown."

Richard Beech, club manager, concludes by saying: "Having this machine means we don't have to choose between being responsible neighbours and preparing the course for our members. It is unbelievable just how quiet this machine is, it means we can cut the greens in the very early hours without disturbing the houses next to the course. It is very exciting to be the first to have the new electric mower and pleasing that our members are seeing the benefits."

To talk to someone about the alternative energy technologies available from Toro, call 01480 226800.