With 54 pitches to mark including Salford City Football Club's training ground and stadium, owner of NW Pitch Maintenance, Andy O'Sullivan, brought the Turf Tank robotic line marker https://turftank.com/row/ on board to improve the efficiency of his line marking operation. 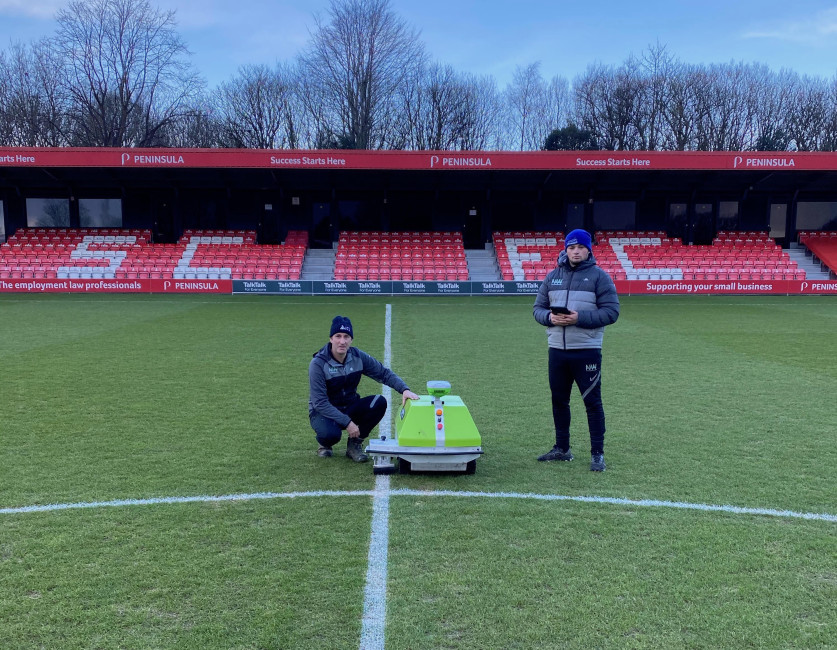 Andy, who was initially sceptical about robotic line markers, arranged a demonstration of the machine at one of his most challenging grassroots pitches with Matt Murray, Northern Area Manager for Turf Tank. After seeing the accuracy of the lines despite the difficult undulations, he knew it would be an asset.

"When Matt from Turf Tank came out to me, I took him to one of the worst pitches I have to look, after in terms of we can't always get on it because it's always a bit rutted," Andy explains. "It was raining heavily, but the lines were really, really straight, and that convinced me to buy it because I thought if it can do that on there, then I've got a chance with this thing.

"The difference with the Turf Tank right now is really apparent because no one is playing football. Previously we would have had to keep the lines otherwise we'd lose them and need to set them up again which is another three-hour job on every pitch. With the Turf Tank we have set the pitches up, and we won't have to go back and overmark them until the pitches are required again.

"Now we turn up, put the base station up and off we go because the pitches are already set-up on the tablet and it's only 20 minutes to mark. The time we save being able to do that justifies the robot alone. And I'd say the lines are undoubtedly better because when you've got a grassroots pitch with undulations, even when you string a pitch with an undulation, you're going to follow that yourself naturally and the string doesn't stay on the ground, it rises above that dip. Whereas the Turf Tank will follow that dip down because it's low to the ground as well.

"I can send my son Liam off to another site, and he can be cutting, and I can take the Turf Tank with me and the tractor to cut as well. I cut one pitch at the training ground and set the Turf Tank off on the other one. I'm then cutting while that's doing its work, we finish at similar times, and I set it off on the pitch I've cut and by the time I've packed my trailer up it's ready to go. It's like having another staff member with me, and in total, I'd say it's saving us 20 to 25 hours a week on line-marking time.

"From the off the robot has been great for us and Matt's training when he installed the machine and back-up service since has been brilliant. He went with Liam and me to a site and talked us through it and made sure we both knew what we were doing and whenever I've 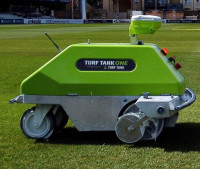 had questions, he's sorted me out on the phone or FaceTime, so he's been excellent the whole time."

Since having the Turf Tank, Andy has been able to diversify his line marking offering and is scheduled to line a lacrosse pitch for the first time and plans to mark running tracks in the summer. Templates for a large number of sports are pre-loaded into the tablet to make marking them quick and easy, with the operator simply having to plot them and push go.