0 Not a Mere dalliance

To explain briefly, a Mere is a body of water which is broader than it is deep and apparently has no thermocline; that's what a dictionary says anyway. A thermocline is the layer of water where the temperature changes from the warmer upper layer to the almost permanently colder layer beneath - you learn something new every day, don't you? I know this pearl of information because I just read about it whilst researching this article on a glorious golf course in the North West of England called The Mere Golf Resort and Spa, in Knutsford, Cheshire.

I stumbled upon many other interesting facts about the mere, including how the glacial till formed it millenniums ago, or the history of the people who settled alongside the mere (which, incidentally, is mentioned in the Domesday Book) and their subsequent lifestyles, but the stuff I was really interested in was how the mere actually interacted with the wildlife which resides there and, in particular, the wildlife which resides at The Mere Golf Resort and Spa, of which there's quite a bit!

Let's concentrate on the golf course before I ramble on about how fantastic the wildlife is; It's an 18-holes parkland style, tree lined course with free flowing fairways and water hazards. By that description you are probably thinking "nothing special there then", but read on as this is no ordinary golfing course.

The course itself is managed by a chap whose knowledge and education are something which I find nothing short of startling, Gwynn Davies BSc (Hons). The greenkeeping team are deputised by Vincent Jensen and consist of Lee Whitaker; Simon Robinson; Nick Pattison; Scott Gaylard; Gary Mowen; Dan Harris; David Melville (mechanic) and two gardeners, John Powell and Trevor Leigh and, on meeting the guys, you can see why the course is presented to the level which it has come to be associated with; "Wentworth of the North West" springs to mind!

In terms of flora and fauna, the team at Mere have many ongoing projects, one of which has been the creation of an orchard and berry garden in an out-of-play area near to the spa. This proactive project has many uses, including being a source of food for wildlife, fruit for their chefs to use and, most importantly, a great source of nectar for their two bee colonies which were set up by the North West's greenkeeping beekeeping celebrity, Mr Eddie Ainsworth, Course Manager of Avro Golf Course. Eddie is fast becoming a legend in this part of the country for his knowledge and passion regarding these declining invertebrates and has undertaken a wonderful job in setting up the team's hives.

The team are in the process of incorporating heather onto the course, with some success I might add. Heather is notoriously difficult to grow on a site where the conditions are not "just right" - the drainage has to be just right, as does the amount of sunlight, whereas the pH needs to be somewhere in between 3.5-4.5 for optimum performance from the plant; either side of these figures and the heather cannot access the vital minerals from the medium it is growing in. The heather the team planted last season is already showing signs of making the golf course its permanent home as they were just coming in to seed when I visited, therefore it will be ready to harvest around late autumn or early winter time - Mere's bees will thank them for developing a proactive project such as this one, I'm sure!

A personal dislike of mine, and a flora which I suggest removing from every site I visit, is an evergreen called rhododendron (Ponticum). This annoying plant offers very little to the environment it is growing in, so it is almost useless to the ecology. Okay, you may find the odd bird's nest in a rhododendron and I have to agree that the UK's pollinating insects (including bumble bees) find the flowers irresistible, and I wouldn't argue against the fact that they are simply stunning to look at. 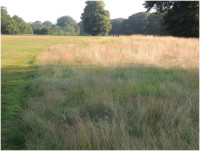 However, the birds which nest there will find very little food on or around this shrub and the flowers last a couple of weeks then fall off, not to mention that the new and emerging leaves release a phenol called diterpenes which neutralises the soil it touches to a point where nothing else, other than the rhododendron, will grow. Therefore, and based on these facts, it is a good idea to remove rhododendron from your golf course asap! The boys at Mere have done just that and the subsequent shade and air movement throughout the course has done the world of good to the turf.

Another highly invasive plant which the team are doing their best to eradicate is bracken. No chemicals are used to defeat this rampant member of the fern family and the team undertake a holistic approach to their management - bracken bashing nonetheless! This method works by flattening or crushing the stem of the plant to a point where it oozes sap and, thus, depletes the internal food store - simple, but very effective.

I must point out that bracken does have its uses in small clumps. For instance, a number of the UK's moths, including Monochroa cytisella and the map-winged swift (Pharmacis fusconebulosa), use bracken as a foodstuff, whereas smaller birds, such as the whinchat and nightjar, have been known to take to a healthy stand of bracken to roost. However, as with all golf course organisms, the correct balance of ecology is paramount and, on every golf course, this is different. I was recently made aware that Britain's snakes hold an interest in bracken, but there aren't many snakes in Scotland and I believe there are none in Ireland, so there you go!

Mere's woodland management takes into account the critters which live there. For instance, any trees which arrive at the end of their life are left standing for woodpeckers and treecreepers, of which there were many showing well during my visit. Saprophytes (decaying wood dwellers) go mad for this kind of thing too but, if the dead tree does need to be cut down, then the team stack them as ecopiles in an out-of-play area of the course - great management!

One of the trees which is in the process of senescing has recently become home to one of the three breeding pairs of Egyptian geese! These geese, which are actually a cross between a shell duck and a goose, can be seen all year round at Mere and are not too common a sight around the North West. This is something I am quite happy about as they can become quite aggressive towards pretty much anything which approaches their nest site - most wildlife will do the same, but will rather make loud noises than actually starting a punch up - not these fellas - they're rough and ready!

There are many really old yew, beech and oak trees on the course and, although some are reaching the end of their lives, most are in a healthy condition. There is a collection of rowans which have succumbed to a honey fungus infection and will be removed this winter by the team but, other than this, Mere is a healthy site for wildlife.

Another great woodland project the team have developed is a small habitat made from recycled pallets, wood etc. Gwynn mentioned that a wren used this area to nest and raise a family in - great recycling management and a great end result, I feel.

For the past few seasons, the greenkeeping team have been carrying out a project to thin the rough out. Whilst Gwynn suggests there is a small amount of chemistry involved in helping them to reach their end goal (which is to have playable rough throughout the site), it is now at a point where it is spot applied rather than the wall-to-wall blanket applications style.

Almost all golf courses in the land apply some form of chemistry to their environs, but it is the wise ones who are reducing their applications as I do not think it will be too long before there is nothing left to use here in the UK - then what?

Mere's rough thinning method is to run a flail mower over it, collect any arisings and then scarify up the area to expose any underlying fescue and/or bent seeds which are present. This procedure does expose the fatter grass species which reside at Mere; however, these are severely reduced over time by the fact that the greenkeepers are systematically reducing their foodstuff at the source, which are actually the grass clippings themselves! A great method and one which produces good results time after time.

Right, back to the wildlife. I noted twenty-seven different types of birdlife over the two visits I made to Mere, including a fleeting glimpse of a colourful kingfisher. There are four different types of raptor (kestrel, sparrowhawk, buzzard and tawny owl) and many waterfowl present. If a bird survey was to be undertaken, then I am positive this number count would triple! Six types of butterfly were seen (Speckled wood, Gatekeeper, Peacock, Red Admiral, Small Copper and Meadow Brown) and more fungi than you can shake a stick at.

If you are looking for wildlife on a golf course, then look no further than Mere Golf Resort and Spa.

One last thing to mention is that one of the beech trees has a carving from 1886 engraved on its bark. I always find these things fascinating and, even though the lovebirds who carved it are long gone, the tree will remain for another hundred years, minimum. Will the golf course still be here? Well put it this way, a golf course managed and maintained to this high standard is only going in one direction - and that's upwards through the rankings!