0 Not out at Richmondshire Cricket Club

Situated in the beautiful North Yorkshire market town of Richmond, Richmondshire Cricket Club is at the heart of the local community. Founded in 1837, the club has a long history and currently plays its cricket in the North Yorkshire South Durham (NYSD) ECB Premier League. 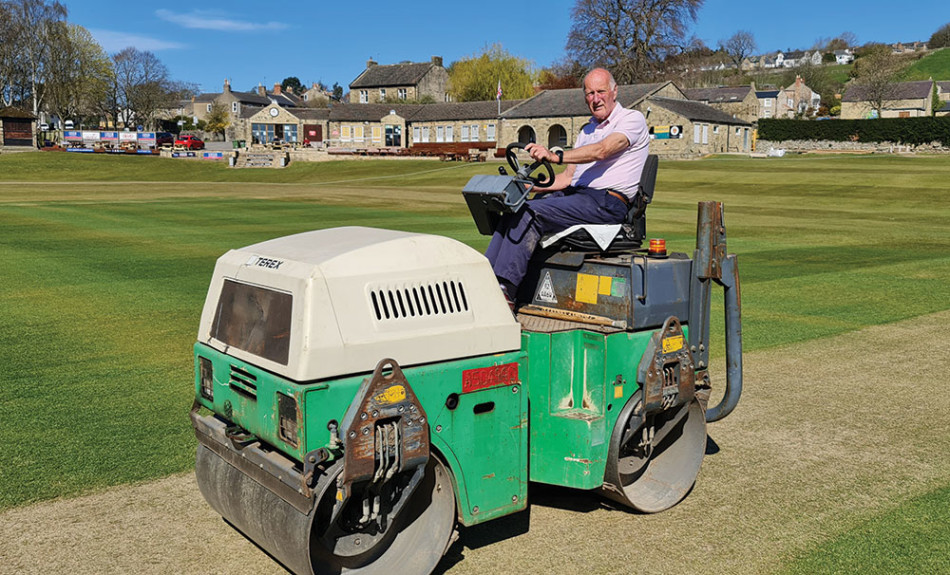 On a warm sunny day in April, Lee Williams sat down outside with Geoff Thorpe. A seventy-two-year-old retired police officer turned full-time groundsman, he has served the club for many years. He discusses the challenges he has faced whilst dedicating much of his spare time to the club he loves.

Back in 1977, Geoff began to play cricket for the club. The following year, a testimonial game against Yorkshire CCC was scheduled to be played; being a policeman, his shift pattern meant he could not help the work party, so he ended up cutting the outfield during the week by himself. "Everything started to progress from there.

I found myself getting more involved with the maintenance and preparation of the wickets and would use any spare time I had to help out."

"Up until 1990, I continued to volunteer at the club until circumstances meant I was stationed over in Pickering, sixty miles away, where I am originally from, then three years later, I retired from the police. At that time, Richmondshire, were in the B Division and there was a vote to get into the A Division. In that winter of 1993, they were voted in. Suddenly, they got a panic on and asked if I would come back as the groundsman. They knew I had retired. So, in 1994, I came back for, what I would call, a part-time wage for a full-time job."

In 1998, Geoff became ill and had to take four years out to recover from his illness before he could even think about getting back to the club and do the job he has grown to love. I asked if his position was kept open for him while he recovered. "It wasn't left open, and I didn't think I would be able to come back, in all honesty. In the four years that passed, they had two groundsmen come and go. Then, one day, I went back down to the club, and I found myself cutting the outfield again. I was then asked if I would like to take back the role of groundsman, which I did." 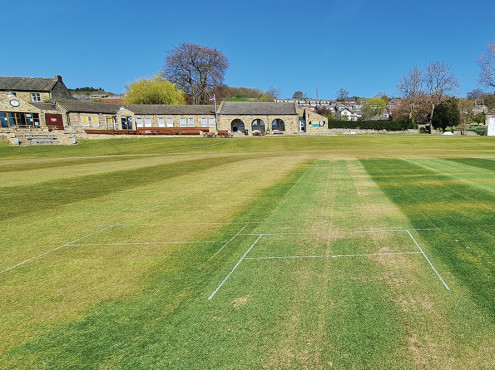 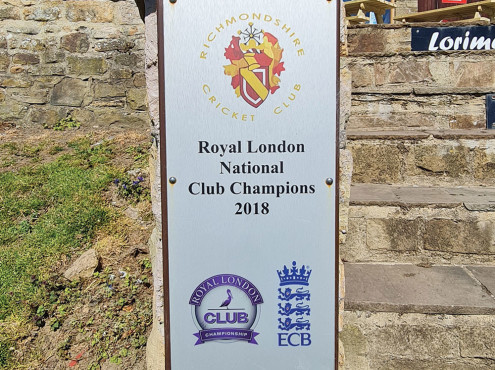 I was interested to know how Geoff managed to gain his knowledge. Was it all gained through working on the ground or did he also attend any educational courses? "Both. The first courses I attended were at Headingley Stadium, which Keith Boyce, the then Head Groundsman of Yorkshire CCC, used to run. Then basically, I would ask other groundskeepers around Yorkshire for their advice. I got to know Mike Corley, who was the Head Groundsman at Scarborough CC. He used to bring his caravan over here to Richmond, and he would pop in and offer me his advice."

At the end of each season, Geoff will put his budget together, along with a wish list, and present it to the club. He very rarely gets what he wants off the wish list, but he is very active in finding ways for the club to raise funds to help improve the grounds. "Over the years, I have held gentlemen's evenings and other events to raise funds, which have helped us purchase the sightscreens and mobile nets. Colin, who is our handyman, has run football events that allowed us to buy the boundary rope and an extra cover. Everybody thinks the club is wealthy because we have a nice clubhouse and decent facilities, but we are far from that."

Geoff kindly gave me a book called NOT OUT, the History of Richmondshire Cricket Club. The book offers no recollection of how the outfield and square were constructed. But what I did find out is the club is built on land that they purchased from the Friary Estate around the turn of the century and was first called the Ronaldshay Recreation Ground. Also, part of the field was originally used to dump the estate's rubbish. "Looking at old pictures and listening to what people have told me, the cricket square was made from Cumberland sea-washed turf, which is not the right stuff for wickets. After the war, they turned the square around, extended it and just rolled the outfield flat. Strangely enough, that's the best part of the square!"

"The square consists of seventeen wickets in total; two are juniors, and the two end ones are used for practice. When I first started, there was no loam in the square to speak of, so I began to incorporate Mendip loam, which did not work for me. After receiving some advice from Mike Corley, I swapped over to Ongar loam which has been great; we now have an excellent loam base. We have good bounce, and that is showing as we now have Durham CCC seconds play here; we have gone from village cricket to national champions."

"Twenty years ago, when the lottery first started, we got a grant to install drains in the outfield and put an artificial wicket in which we have since taken out and replaced with two new wickets."

As well as the square, they have a four-lane training net that is constantly in use, so they have a booking system to cope with demand. "It is especially busy in the summer holidays when the children are not in school. We also accommodate six adult teams and a junior section; we have so many teams I lose count, LOL."

Additional equipment at the club includes roll-on covers, three of which they got a grant for through the Co-op's Local Community Foundation alongside their sponsor Irvine's estate agents, whose owner plays cricket for the club. The fourth was purchased using money the club had raised.

Irrigation is limited and consists of a mains tap with a long hose and sprinkler. "It takes me ages to water as the pressure is low and, if someone uses the toilets in the clubhouse, it stops. When watering, I tend to try and leave it overnight when possible."

Geoff talks me through what he describes as a standard maintenance regime. "I cut the outfield and the square every second day, both at a height of 12mm and, if the weather is right, I will whizz over it again on Saturday morning. For the outfield, I have a five-unit Toro Reelmaster 6500-D, and for the square, I use the Dennis G860."

"As far as square maintenance is concerned, I will start to prepare a pitch ten to fourteen days beforehand depending on what the weather is like and what the forecast is. In that period, I will slowly cut down to a height of 3mm, although recently I have changed my regime and lifted the cut to 5mm. I can't say I have noticed a difference in play, but it now recovers a lot better because you are not scalping it off."

"Before I start the rolling process, I will give the pitch a light verti-cut using the Dennis FT510 for a few passes until I am happy with it, then I will brush it using the brush reel in the same machine." 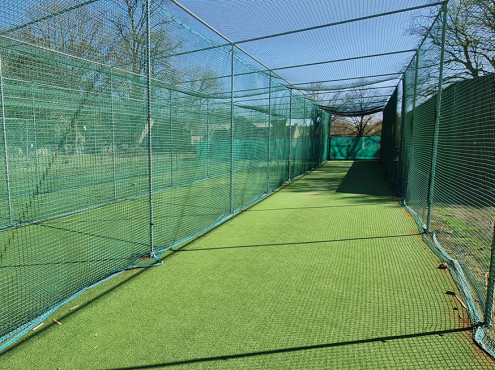 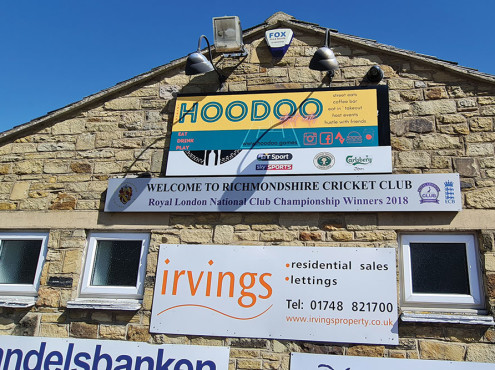 "For the first two or three days, I will roll it twice a day for half an hour each time, and I will steadily reduce the time spent rolling until I know, by the feel of the wicket, when to stop. On the day of a match, I may give it a final light roll if I feel it is required."

I asked Geoff what he does after a game to repair the wicket and what renovations are taken out at the end of the season? "What I have started to do, instead of using the brush straight away, is use a blower first to remove the worst of the debris, then I will follow behind with the brush. I find this gives a better finish. I will repair the foot holes with Ongar loam, bang it down and seed it off. Quite often, I will use a wicket until it is absolutely worn out. We have an evening league side, under 17, and under 15 teams that will play on it. I do not like to try and bring a wicket back halfway through the season as I never seem to get as good a wicket the second time around."

"I have a contractor to come in, who is the groundsman at Harrogate, to carry out my end of season renovations. This will include scarifying the square with a tractor mounted SISIS - two or three passes depending on what is needed, and then Barenbrug Bar Extreme grass seed is broadcast with a spreader which goes into the grooves made by the scarifier. The final stage of the process is to topdress with Ongar loam, which is then brushed in, followed by a pre-seed fertiliser."

"I do have a small fertiliser programme which I do try to follow as best I can with the limited water supply we have to water the products in. At the start of the season, before I start pre-season rolling, I will apply a granular autumn/winter feed. Then, a fortnight before the season begins, I will put a spring/summer down. Two years ago, I turned to liquid fertilisers through the summer, mainly because of the problems with watering the granular feeds in. They have worked well, but you do have to put them on more often. The guy at Richmond (Yorks) Bowls Club has a small pedestrian sprayer, so he applies the liquids for me every three weeks."

At one end, on the square nearest to the clubhouse, the outfield has started to sink, causing a low spot where the water sits after it has rained, which was clearly visible from where we sat. Geoff is hoping to address this problem at the end of the season. "The water does eventually dissipate through to the drainage underneath, but I would like to get the area levelled off, so the water has nowhere to stand. We are in a bowl, so all the water runs towards the square from all sides. I will have to get some prices together to carry out that work, as well as a cost to fill in the trenches at the back of the screen where the water supply was moved over to my new shed. I am hopeful we can get both of these jobs done at the same time."

Geoff has bought eighty percent of the club's machinery as there is not enough money within the club to purchase the machinery he requires. "Being a groundsman is not just a job for me, it is my hobby and something I really enjoy doing. So, if I see something I like, or a piece of kit that will make the job easier and I do not have to mess around fixing it all the time, I will buy it. I bought the Kubota ST30 tractor many years ago, and the club has paid me so much back a month for it. The same thing happened with the old roller when it broke down, and I bought the new one."

Richmond (Yorks) Golf Club, a mile up the road, undertake all of Geoff's machinery servicing and maintenance work on his machinery. "I will take the kit up to them or get a contractor to drop it off. They have all the grinders and equipment to carry out the job."