0 Not so rough times at Pyecombe 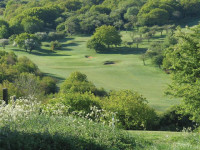 Increasing numbers of golf courses across the UK are realising the important role they have to play in protecting wildlife and contributing to biodiversity. As a result, many courses are actively implementing wildlife areas with the aim of protecting the habitat and encouraging some of our dwindling native species.

Pyecombe Golf Club is a 116 year old club located in West Sussex which nestles in the shadows of the famous Jack and Jill windmills at the foot of the South Downs.

One visitor to the course commented that, "Pyecombe certainly deserves to be included as one of the must play downland courses in this country." One of the past Presidents was the famous golf commentator, journalist and author, Henry Longhurst, who also owned Jack and Jill.

Owned by its members, the 18-hole course is a par 71, 6266 yards, and offers some truly striking scenery. Spread over 240 acres within the boundaries of the South Downs National Park, Pyecombe is a typical downland course but with some areas of clay and semi-mature woodlands. The fairways and rough are mainly amenity grassland and chalk grassland, but also on the course is an area of chalk heath which is a Site of Special Scientific Interest (SSSI) and a Site of Nature Conservation Importance. The downland terrain provides good drainage, so the course is rarely closed, even in the wettest of weather.

Rangers from the South Downs Conservation Board help to look after areas of the course by organising volunteers and providing ecology reports and plans. Simon Wells, Head Greenkeeper at Pyecombe Golf Club said "It's vital that we strike the right balance between good playing conditions and being ecologically sound."

Simon and his team have worked hard to create wildflower areas along the course. "These areas look stunning during the spring when they are in full bloom, and they also help the golfers because the grass is thinner so it is easier for them to find their wayward balls!" Simon continued, "It takes time to establish, years in fact. We cut the grass and flowers annually, then rake the cut material up and remove it quickly before the nutrients penetrate the soil. Removing the nutrients ensures the growth of the grass and other unwanted flora is slowed, but the wildflowers are encouraged and flourish as a result. We used to use a strimmer and then rake it by hand, but this is very labour intensive and uses many man hours."

"We are now lucky enough to have access to a BCS Bank Commander, with a scythe cutter bar, and a hay rake which has speeded up the job no end. It also allows us to get onto the slopes and cut areas that we previously couldn't get to with a ride-on mower. It is much quicker and easier than strimming and one man can do pretty much most of it. The cutting action of the scythe and the removal of the cut material imitates sheep grazing, which is what would have happened years ago. In fact, many courses are now returning to this method as it helps maintain a balanced and diverse ecosystem." 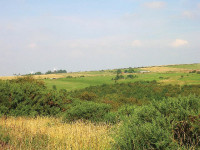 Twenty years ago Pyecombe Golf Club had no rough at all, so Simon and his team had to, literally, start from scratch, gradually introducing it to enhance the game by creating an additional golfing challenge. However, one of the issues raised by the golfers was that the grass in the rough was too thick and, therefore, slowed play as too much time was spent searching for balls in the thick foliage.

The team then had to find ways to thin the grass so, following attendance at seminars, and recommendations from colleagues in the greenkeeping industry, they began to introduce wildflowers.

Simon said, "Since the wildflowers have begun to establish themselves many of the golfers have commented on the vast numbers of species, and how it has helped to enrich their game. Some were a little apprehensive in the beginning, but the majority have come round now. Their game has been improved because less time is spent in the rough and, as the look of the course has been greatly enhanced, so their overall experience is more enjoyable, which is, ultimately, what it's all about. It has also helped to keep costs down too, as the areas need much less maintenance than previously, which means less manpower and less wear and tear on the machines." 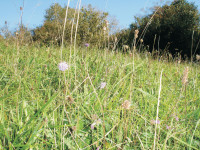 The wildflowers are only cut once a year, usually late September or early October after the nesting birds have fledged, this is also the end of the golf calendar competitions. Cutting with a scythe assists the wildflowers to reseed naturally as the seed heads are left intact and as they fall, or are turned and raked, the seeds flower again. The 'combs' on the hay rake also make a slight groove in the earth which the seeds fall into, assisting with germination.

To further encourage wildlife, such as butterflies, bees and birds, and because there are rare fungi growing, there are no weedkillers or fungicides used on these areas.

In addition to this, Simon is currently using a 'compost tea' on other areas of the golf course with the aim of reducing fungicides across the whole area. 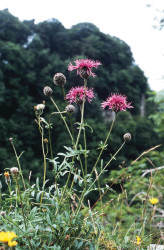 Once the decision had been made to convert the rough areas to wildflowers, Simon contacted STRI for advice. "They were a great help, they sent a representative to visit who provided a full report and an action plan to assist us reach our goals. They returned to check our progress and offered more advice and assistance. Prior to this, we had followed the South Downs Ranger's five year action plan which helped us initially and from which we have reaped the benefits."

The greenkeeping team have also been regenerating heather in certain areas around the course. The heather was already well-established so, in order to encourage further growth, turf around the existing plants was removed and seeds were spread out.

Other rough areas of the course are maintained annually by a local farmer who cuts the vegetation and then bales it for easy removal, usually at the end of the summer.

During February or March, Simon hires an Amazone scarifier for his tractor and scarifies the areas to remove the deep-rooted moss and thatch and promote healthy growth, which further reduces the nutrients available in the soil.

Simon and his greenkeepers have been awarded various accreditations, including The English Golf Environment Award for Commitment to Ecological Good Practice, and have been Highly Commended twice in the STRI Golf Environment Competition.