0 Now is the time to tackle chafer grubs

Whilst a knowledge of entomology may be a key advantage to groundsmen and greenkeepers when tackling chafer grubs in turf, Bayer recommend an annual preventative approach as the more practical solution.

"All species of Chafer grub have the potential to severely damage turf playing surfaces and present a tough repair challenge," says James Hadlow, Bayer's Commercial Technical Manager. "The adult insects burrow into the turf and lay their eggs close to the soil surface before the grubs hatch and start feeding. They, essentially, cut the roots off and kill the turf. In worst cases, the turf surface will actually come away from the ground and peel off like a carpet."

Despite measuring only around 10mm to 30mm in size, Chafer grubs are a big problem for any turf manager, but particularly greenkeepers who strive for smooth, even golf greens. This destabilisation of the turf is also a concern on racecourses, as the force of a galloping horse can cause the surface to give way drastically. This can be extremely dangerous and could result in significant injury - or worse.

When trying to combat these challenging pests, James says that being able to understand the spectrum of pest species and their associated lifecycles is essential. 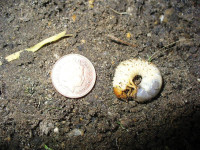 "There are four common species in the UK," notes James. "There's the Cockchafer (Melolontha melolontha), more commonly called the May bug, which is the largest in size but occurs more sporadically. The most important species which can cause damage are the Garden (Phyllopertha horticola), Welsh (Hoplia philanthus) and Summer Chafers (Amphimallon solstitialis)."

James adds that the Cockchafer can take up to four years to go through one lifecycle, whilst the Garden Chafer completes its lifecycle in one year, and the Welsh and Summer Chafer have a two year lifecycle.

"Yet, without scientific examination, it is very difficult to tell the Welsh and Garden Chafer apart. If there is a high risk of Chafer infestation, it is strongly advised that turf professionals use an insecticide like Merit Turf, every year, especially if the Chafer grub species is unknown; or if the species has been identified and has a multiple year lifecycle." 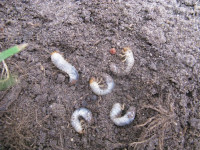 James explains grubs at multiple stages of their lifecycle present a key challenge. "Typically, some eggs will have been laid during the spring of the previous year, but will be present alongside larger grubs laid two years before. Insecticide treatments won't control these larger grubs. In fact, by the time the grubs have reached this size, the damage will have been done. This is why understanding the grub's lifecycle is an advantage."

He advises that the most effective control is to apply an insecticide treatment like Bayer's Merit Turf, when the beetles are laying their eggs. This tends to be in late spring and can be anytime between the end of April through to July. "A turfcare professional will need to apply an insecticide at this time of year, every year as not all grubs will die with just one application," says James. "As a result, for example, it could take up to four years to control the Cockchafer on one particular site."

James explains that most professional turf areas, such as golf or racecourses, are often relatively small in comparison to the surrounding area of untreated habitat. "This is essentially a reservoir for infestation," says James. "There is a constant pressure, year on year from beetles crawling or flying in, so it really is recommended that turf managers get into the habit of using a preventative treatment every year."

Whilst frequency of treatment is a key issue, James adds that application technique is also important. "Merit Turf needs to be applied evenly across the whole turf area before being thoroughly irrigated. Watering-in is critical for successful control and to move the active ingredient through the thatch and into the rootzone of the turf. Its systemic mode of action means that, when the grubs eat the roots, they subsequently stop feeding before dying. The young grubs are also controlled through coming into contact with the product in the soil.

According to James, turfcare professionals often don't realise that they have a problem, or they don't fully understand it. They only start to react when they see damage to the turf and, at that point, it's too late. The visual damage has, by that stage, been exacerbated by predators such as foxes, badgers and large birds. They scratch away the loose turf in an attempt to eat the grubs.

"Turfcare professionals can help to reduce the visible damage at this stage by installing physical barriers to keep predators out but, whilst this may maintain the visual appearance of the turf, the damage has been done and repairs will still need to be made to the turf," concludes James.

For further information or to purchase visit Merit Turf in the Pitchcare Store.