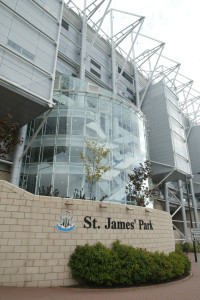 One of the North East's most popular sporting venues is on the shortlist for a top award - and, if it wins, the trophy won't have far to travel.

St James' Park - home to Newcastle United - is a contender in the category of Business Tourism at the North East England Tourism awards.

However, the stadium is also hosting the ceremony on November 21 - making it a winner, whatever the outcome on the night.

Businesses across the North East with links to the tourism industry will gather at the stadium for the event with winners going on to compete on a national stage against winners from England's other regions at the VisitEngland Awards for Excellence in 2014.

The Business Tourism award acknowledges the importance of the meetings, incentives, conferences and exhibitions sector of the tourism industry in the region and NUFC has entered in partnership with Sodexo Prestige, which provides catering, hospitality and banqueting at St James' Park.

Not only does the stadium have one of the biggest banqueting suites in the North East, holding up to 1,000 guests, but it also hosts a wide variety of events from product launches to private dinners and fundraising events in its meeting rooms and conference suites.

"We're delighted to have been picked to host this prestigious event," said Frankie Angus, General Manager for Sodexo Prestige at NUFC "but to win our category really would be the icing on the cake."

In addition, the club's chefs took the bronze award in the Team of Chefs category while duty manager, 65-year-old Michael Moran, was also awarded bronze in the Special Achievement category for his years of dedication.

The Sodexo Prestige team also received the bronze medal in Matchday Experience Award - Overall Winner category for the quality of its matchday hospitality experience. The club was only one of four to be nominated in the Directors' Choice category, selected by the directors' of clubs across the premier league.