0 Nursing the Loughborough University pitch back to life

Loughborough University is a public research university in the market town of Loughborough, Leicestershire, in the East Midlands of England. It covers an area of 438 acres (1.77 km2) and, after getting lost on the expansive site for around twenty minutes, Lee Williams eventually met up with Kris Nurse, 34-year-old Team Leader, outside the impressive University stadium. 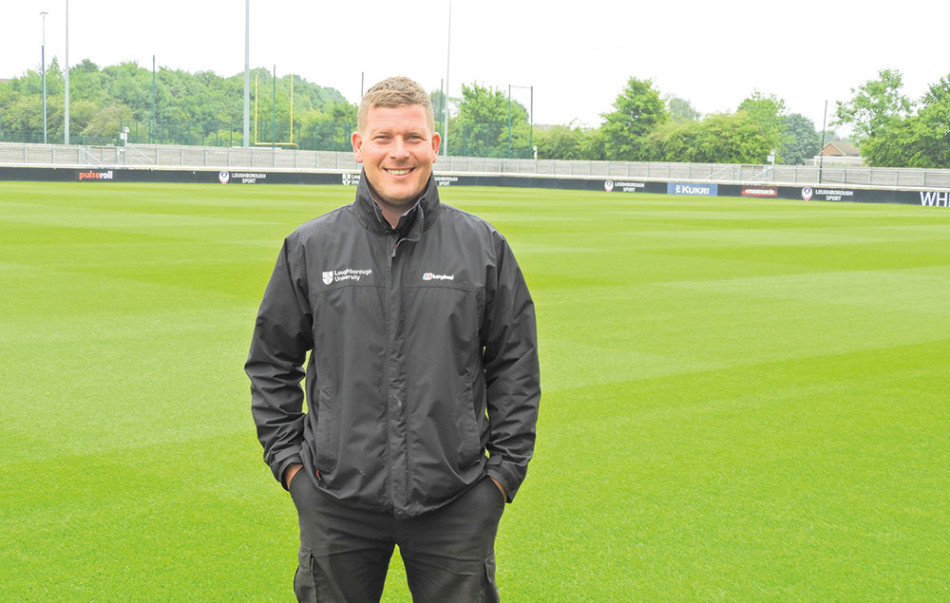 Before becoming a groundsman, Kris had dreams of being a professional footballer; signing his first contract at the age of sixteen for Notts County where he played for three years before the club went into administration. He said: "I tried to find another club but, at that particular time, there was nothing available. I really wanted to stay involved in football, as it's something I have done from a very young age; I couldn't see myself working in an office, or doing anything else for that matter. So, my uncle got me a job at Rolls Royce Leisure facility, based in Derby. As a starting point, to see how I got on, I worked on fine turf, football, and rugby. I really enjoyed it and was then given the opportunity to gain my NVQ Level 2 and 3 in Sports Turf. After just over a year, a job opportunity came up at the University, which is two minutes down the road from where I live in Quorn, so it was ideal. I applied and got the job."

"When I first joined (as an assistant groundsman), we were not split into two teams at that point; it was one big team of eight and we were tasked with looking after all sports. Then, six years ago, it was decided to split the group into two teams - one looking after athletics and rugby and the other looking after what was to be a footballing hub. I felt I was doing a good job, and I had learned the trade, so I went for the team leader position of the footballing hub. I got the position and the rest is history really… since then, I have just been trying to make this division as good as I can."

Kris admits he is still learning every day and he is not perfect. "There is always something around the corner to challenge you. For example, twelve months ago, we had the new SIS hybrid pitch installed in the University's stadium. This type of surface was new to me, but I have taken to it well and enjoy working with it." 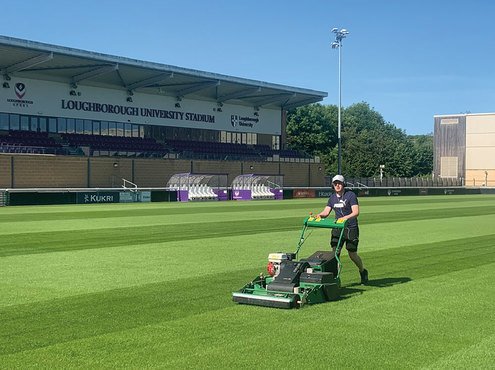 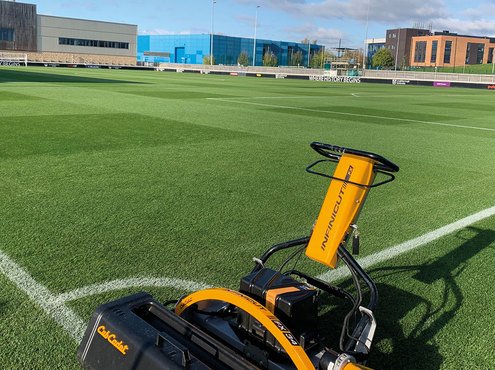 The grounds team are well supported by the University when it comes to the budget. Kris will discuss the requirements for the football pitches with William Relf, who is the Sports Grounds Manager and oversees everything.

The site is expansive and covers nearly every sport you could think of, but Kris's sole responsibility (alongside his team) is to keep the hybrid pitch, six fully-constructed sand-based pitches and two 3G pitches in tip-top condition. The stadium pitch is home to Loughborough Foxes and, for fifteen games a year, also the Derby County under 23s. Additional tournaments, student fixtures, and the occasional rugby and lacrosse games, make for a pretty busy schedule.

All of the football pitches have fully automatic irrigation systems. "We went for Rain Bird on the new stadium pitch, as we wanted to try something different and the construction company already had a good relationship with them. Predominantly, the rest of the site is Toro and, in my opinion, they are both excellent products; we have no problems with either set-up. All pitches are controlled via a Heron control panel and are fed from an underground tank, which is attached to the mains water supply."

Given the number of games they have to accommodate on the new hybrid pitch, and with some of them being important matches for the University, they do have an old set of frost covers they can use if the temperatures drop in winter. If needed, they will also use them on the training pitches - if it was seen as a priority.

At Saltex 2019, Kris entered SGL Systems' competition to win a three-month trial of the BU50 - the first grow light in the basic line range from SGL. Luckily, Loughborough University was chosen out of almost one hundred competitors and is the first-ever school to use SGL grow lights. "We have always talked about having something to help aid this particular pitch, and we were going to Saltex to see if there were any small rigs we could look at buying. We obviously do not have the kind of budget that will stretch to buy the bigger rigs that you see in the Premier League. We went over to the SGL stand and saw the competition was on so I put our name down. I couldn't believe it when we got the call to say we had won and we started the trial last December."

With the rig needing to be assembled on-site - which allows SGL to cut the costs on delivery) - I asked Kris was it easy to put together? "It arrived on a couple of pallets and, with help from Tom Grafen - SGL's Technical Sales Manager - we all chipped in and put it together. It was very easy to build; just a matter of knocking a few bolts in … simple."

Kris has already seen some good results from the trial and is keen to invest. "With it being a small unit, we chose to use it in front of the main stand (where we have always had trouble with shade) and also in the goalmouths. We have certainly seen some improvement, but I must admit, it was hard to tell last December because it was quite mild. In January and February, we had a cold blitz and, as advised by SGL, we moved it around in certain areas. I definitely noticed vast improvements and recovery was a lot better. Before lockdown, we had spoken to Tom, and we were going to get two second-hand larger rigs, but obviously with everything that has happened, they are now on the back burner." 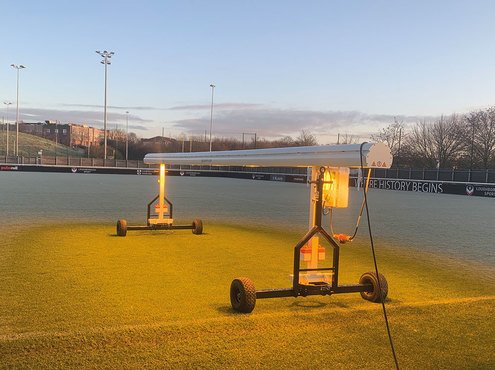 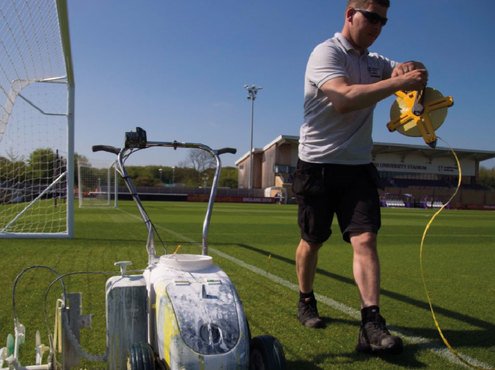 The decision to invest in a new pitch for the stadium was long overdue; the older fibresand based pitch just could not cope with the amount of games. "When the stadium was built, we had a fibresand pitch put in which would be more durable and could host more games. In the last year of the fibresand pitch, we had ninety-two games on it, drainage also needed addressing as it was capped and the pitch was suffering with a black layer. The main issues were that the pitch was not a fully constructed fibresand surface; we had basically incorporated fibresand into the existing sand-based pitch and we were Koroing year on year, without replacing the fibre content. It was struggling to drain, and it was unbelievably hard, even with all the aeration we were undertaking."

"One incident we had was when we hosted a Champions League under 23s game between Leicester City and Copenhagen. Two hours before the game, we had a bucket load of rain come down and the water on the pitch just did not budge, so we had to call it off. Unfortunately, we needed these things to happen on those big occasions to force the powers that be to realise the problems we were facing."

Once the go-ahead was given to replace the existing stadium pitch, it was a matter of deciding what would be the best hybrid pitch for their needs. "We went to other clubs and talked to various other groundsmen. I am quite close with Paul Thompson at Derby County FC, and they use three pitches at the training ground for the first team that are SISGrass. We liked what he had to say, so we decided to go down that route. We also have a partnership with SIS, as all our artificial carpets are done by them, so it was only natural I suppose. The new pitch has been fully booked in the last twelve months up until lockdown and has brought in the likes of Derby County, which is great." 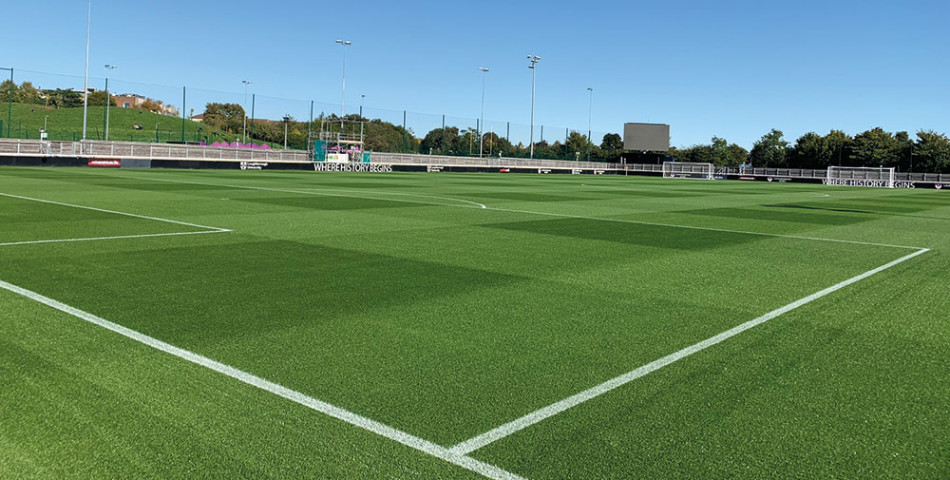 Kris talks me through the essential maintenance of the hybrid pitch. "In summer, we cut every day (if not every other day) at 25mm with the Cub Cadet Infinicut. In winter, we lift the height of cut to 27mm but if it is healthy and well, we will keep it at 25mm. Every two weeks, I will use the Clegg hammer to determine how often we use the Toro ProCore on the pitch. To clean out the surface after a game, we will use the flexi-comb brush attachments on the Infinicuts, which are excellent. We will lower the height to get them into the ground and really clean them out."

Every six months, Kris will have soil samples taken from the stadium pitch to help him determine the levels of fertiliser he needs to apply. "At the minute, we are doing a four-week start-up plan (provided by AGS) which, if I'm honest seems like a lot of product, but this is all new to me and I'm still learning about the fertiliser inputs for a very hungry pitch. It can be done every six days with liquids and fertilisers, but obviously, this is a balanced nutritional programme. I'm picking things up pretty fast and if I think something has worked and see some good results, I will report that back."

The University likes to buy all machinery outright. "We are always looking to improve our machinery to help us improve the quality of the pitches. When we are looking to invest in a new machine, where possible, we will have on-site demos to help us choose the best machine for the job."

"The University are keen on health and safety and the environment. We have already invested in the Infinicut battery-powered hand mowers to help reduce hand held arm vibration and noise alike. Further down the line, I can see us moving towards more battery-powered machinery as the technology becomes more widely available. Using battery power over diesel and petrol is better for our health and those around us." 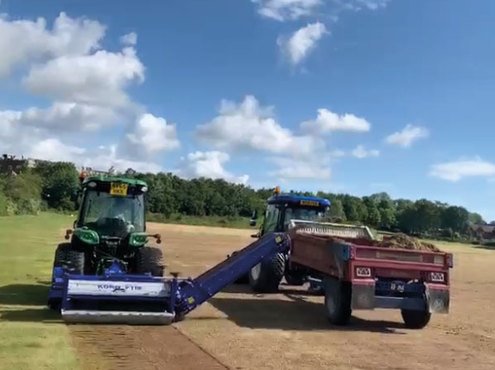 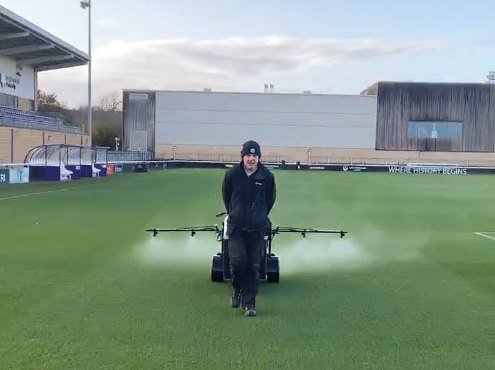 Kris brought up the subject of attracting younger people into the industry, so I was interested on hearing his thoughts on the matter. "The salaries don't help; I have just lost two of my lads to the Premier League; they were offered more money than they were getting here. Over the whole industry, the money situation puts a lot of people off. I hear from people at league clubs who have to struggle with very limited budgets and fight against people at the top - which is no fun. As an industry, we must try to prove to people that the right thing has got to be done and it takes certain things to happen to get the results. The worrying part is the amount of people who do not want to be in groundsmanship anymore."