A popular Warwickshire equestrian sports venue has been revitalised by enthusiastic young teams using modern techniques to make the most of its natural attributes. Jane Carley meets the husband and wife team running the facility. 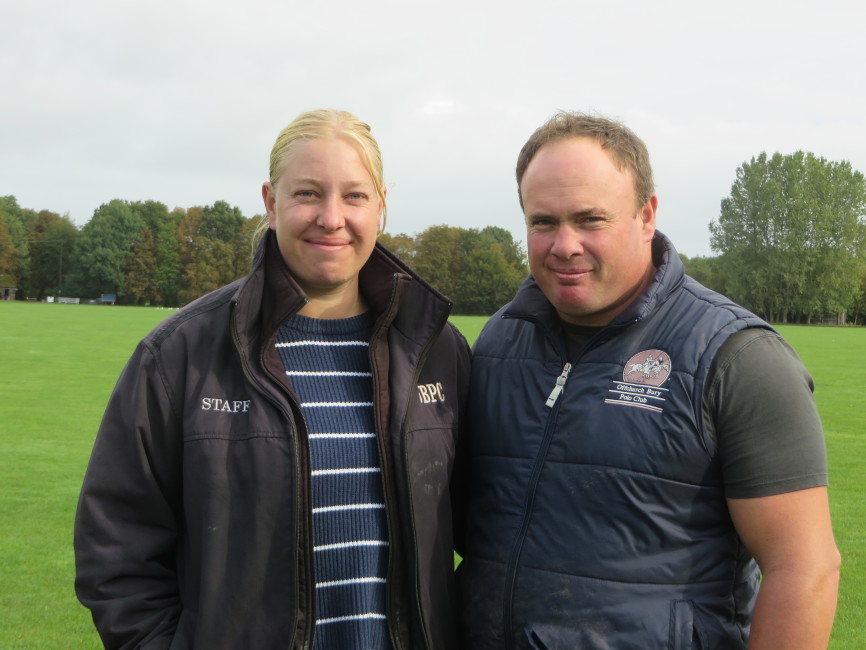 Set in historic parkland to the south of Royal Leamington Spa, Offchurch Bury Polo Club in Warwickshire is an idyllic place to spend a summer's day, and a focus on the grass roots is bringing a host of new devotees to the 'sport of princes'.

Polo came to Offchurch, where the manor house dates back to the 16th Century, in 1989, when Diana Johnson established the club after playing the sport in India. It was also one of the pioneers of arena polo, a winter sport played by teams of three on an enclosed synthetic pitch (rather than the four who play the summer sport on a full-sized grass pitch).

Since 2008, the club has been managed by Diana's daughter Tessa and her husband, professional three-goal polo player Grant Collett.

"We wanted to offer a grass roots polo experience," explains Tessa. "We aim to introduce new players to the sport and provide cost-effective, enjoyable polo."

The original full-size pitch had an area of 'dead space' behind it, and when negotiating a contract with the Schools and Universities Polo Association (SUPA), was proposed that the field could be rejigged to create a full-size pitch and a three-quarter size pitch, the latter suitable for chukkas (practice) and matches for younger players. The pitches sit side by side with the commentary box at the centre for fixtures. 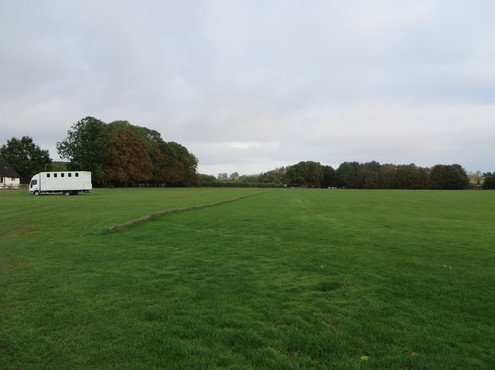 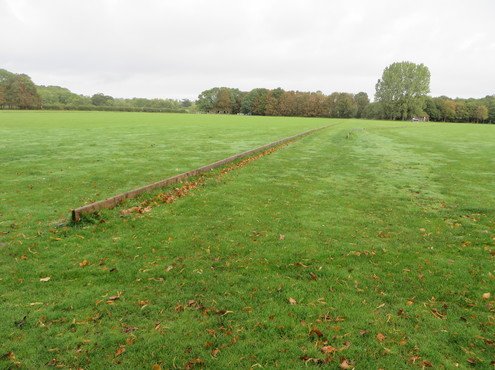 The main polo pitch was established in 1989 by manager Tessa Collett's mother Diana Johnson / The junction of the pitches, marked by the boards, and the area between used for the commentary box at matches

A further re-boarding of the main pitch in 2018 has widened it slightly to improve the playing experience.

"The pitches were originally grazing land and, in the early days, continuing to graze with sheep was an important part of the maintenance regime," explains Grant. "But sheep do make distinct tracks in the turf, and another issue was the prohibitive cost of temporary fencing, so they have now gone."

One benefit of the parkland turf is that it never gets very hard, but with safe, enjoyable play the priority, sanding to improve the polo ponies' grip is an important task, with 300 tonnes of sand applied last year.

"The larger clubs will put on 500-1000 tonnes a year, but it is expensive, and works best with aeration or coring."

"It takes quite a lot of maintenance to keep the pitch playing well," comments Grant, who in addition to playing polo also gives all of the polo lessons that are a key part of any club's bread and butter. "We mow with a Major topper with rollers front and back to a height of 2.5cm - the topper is 3m, but 4 or 5m would be better to cover the large area of ground. A light Cambridge roll then presses down the divots without going too deep, and a flat roll evens out the surface."

With mature trees surrounding it, the smaller pitch suffers more in wet conditions.

"If there's a lot of rain, we'll also use a slitter to help water get away - I usually work lengthways along the pitch and it now needs doing the other way. I'd like to hollow core, but it is a slow job on such a large area of turf." 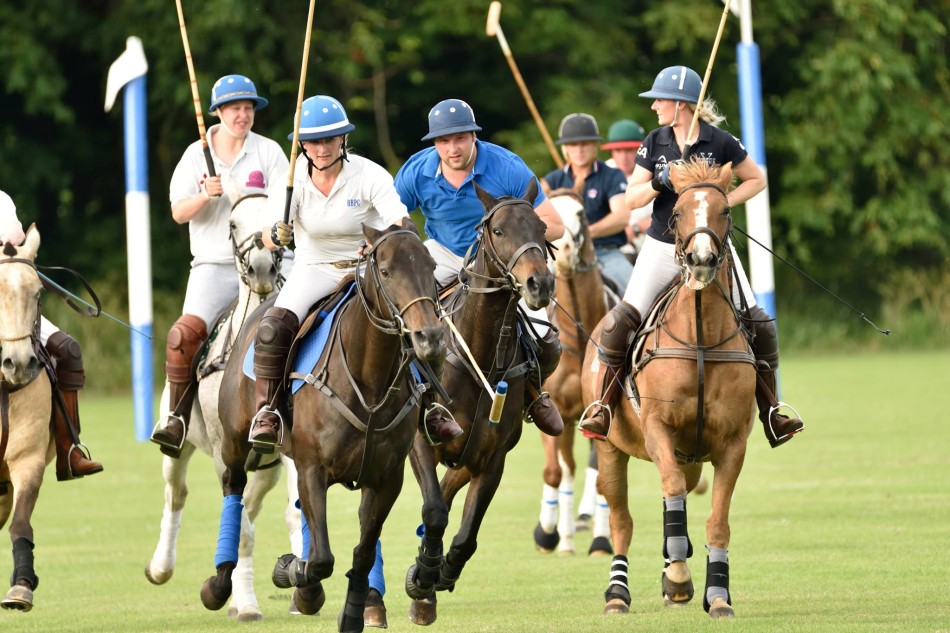 The pitch in play, with Tessa on the left on the grey horse

Granular fertiliser is applied in May and at the end of the season, and overseeding takes place in the autumn.

"We last seeded in 2017, simply because finding the right mixture for polo is so difficult. You need species with good rooting to withstand the traction of the horse's hooves, and the current sward's roots are a bit shallow so it's easily damaged."

Grant explains that damage is mainly concentrated in a diamond pattern, between the goal areas and centre sides, with the corners faring better.

The season starts officially on 1st April, but Tessa comments that it is often the end of April before they can get on the pitch, whilst in a dry season, such as 2018, play can continue into November.

Chukkas are held on a Thursday with matches on Saturday and Sunday throughout the season.

Students from Birmingham, Leicester, Nottingham, Warwick and Coventry Universities can access lessons, chukkas and fixtures in summer and winter, with the climax of the season being the Universities Summer National Championships and their Alumni equivalent in June.

Regular taster days are also held and, contrary to the traditional image of polo being an elitist sport, Grant has thirty ponies for hire so players don't need to be horse owners. 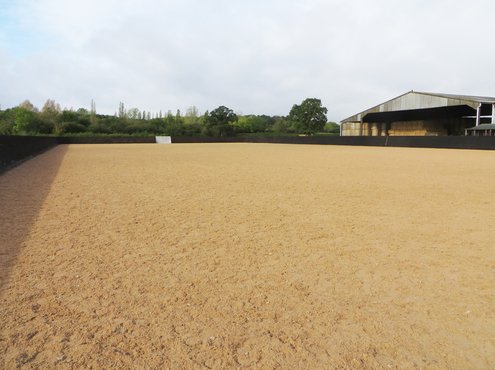 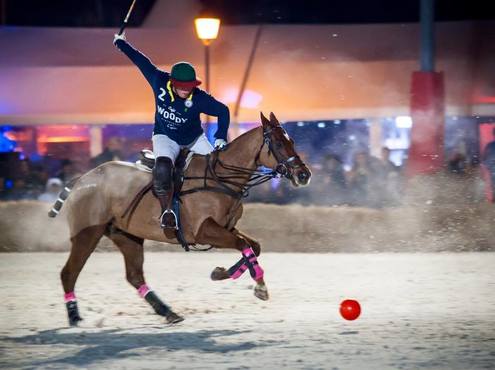 A larger, softer ball is used in the arena

A 94 x 47m arena offers a safe, enclosed area for teaching, as well as competition, and has undergone a major refurbishment this year. Railway sleeper-type solid fencing keeps the ball (a larger, softer version of that used in the turf game) in play and has all been treated and painted.

A new surface from Andrews Bowen is a mixture of sand, fibres and wax, Grant explains.

"There's more wax than is used for other equestrian disciplines to give additional grip, and the underlying drainage has also been updated so that play can continue in all weathers."

Maintenance is mainly down to a pigtail tine harrow supplied by Andrews Bowen and used daily, pulled by a 54hp JCB 354, the club's main tractor.

"We can also use the one tonne roller, but I try not to roll too much as it can produce undulations in the surface," he says. "A certain amount of the surface is carried out on hooves and when horse droppings are removed, so the supplier recommends topping up every seven years."

For many of these hours, Grant is also working hard, training young polo ponies whilst teaching at the same time.

"I'm from a farming background so, while I have focused on polo, I'm able to look after the grounds to keep our costs down. The beginning of the season can be tough - there are just not enough hours in the day." 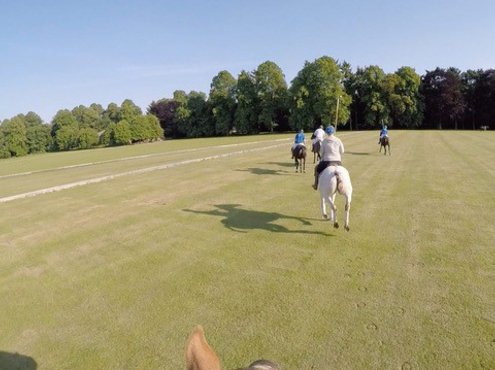 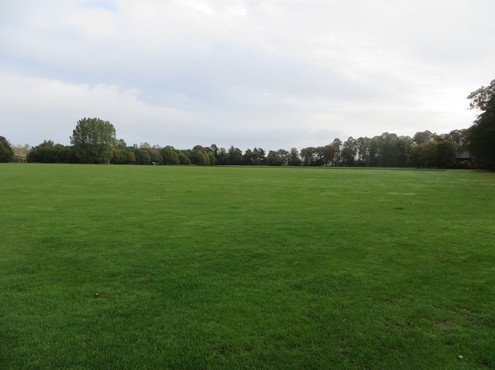 Tessa agrees: "In the summer, everyone wants to play and it's hectic, and a few of our members now want to play year-round. But the students are very keen to play in winter and the new arena surface should make a big difference."

For the local equestrian community, Offchurch is also synonymous with cross country riding, the 'old turf' and rolling hills in the parkland ideal for testing the horse's ability to gallop and jump. Changes in specifications for affiliated one-day eventing meant that the existing cross country course fell out of use towards the Millennium but, more recently, event organiser and course builder Lloyd Hunt has revitalised interest in Offchurch as a venue.

Lloyd founded LandS Eventing with the idea of bringing high quality equestrian events to Warwickshire, after being involved with eventing as a rider since starting in the Pony Club back in the early 1990s. He is a British Eventing (BE) course builder, was one of the repairs team at the London Olympics in 2012, and organises equestrian events at multiple venues throughout the county.

Instigating a programme of grounds maintenance to make the parkland more resilient to damage from countless hooves in the course of a competition, he has combined permanent and portable cross-country obstacles, and prepared dressage, show jumping and horsebox parking areas. 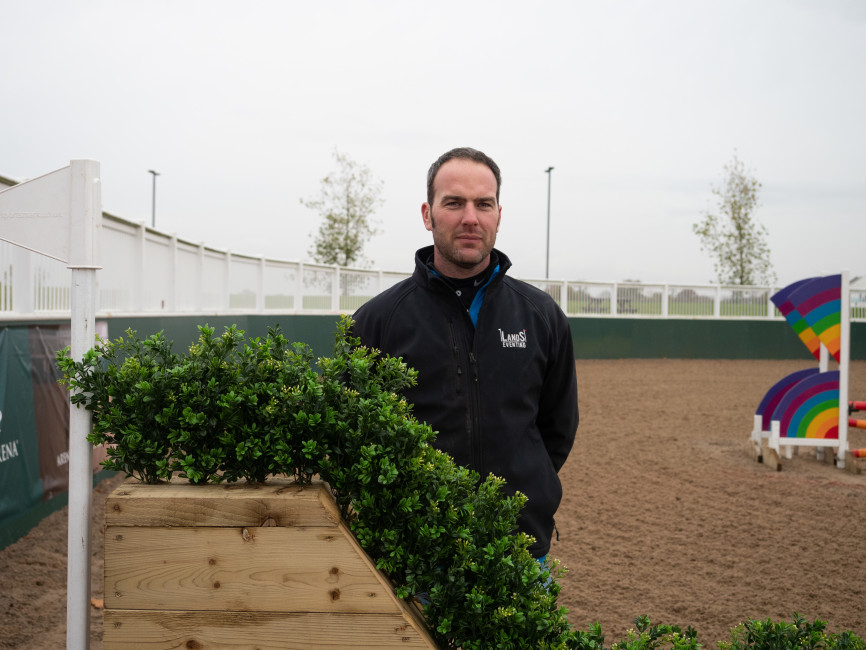 With a background in eventing as a rider, BE course builder Lloyd Hunt has brought affiliated eventing, plus a range of other competitions back to Offchurch

"We started by hosting Pony Club camp in the park in 2012, and moved onto unaffiliated competitions and Pony Club area championships before approaching British Eventing to see if Offchurch could host affiliated eventing again," he explains.

"Another local venue had closed so we were able to secure their former date in the calendar, and British Eventing returned to Offchurch in June 2019."

With equestrian events in March, June, August and October, plus a Wolf Run using the venue, Lloyd says that his greatest asset is the old parkland turf, which recovers well from damage.

"At the start of the season, I slit everywhere, harrow and roll; a month before each competition, I'll slit again to ease any compaction. If the root structure is good, the turf will cope with the impact of the hooves, even given the variable weather," he comments.

"I also use a lot of portable fences which can be moved to fresh ground while any damage recovers, but the plan is to expand the amount of permanent fences as conditions improve." 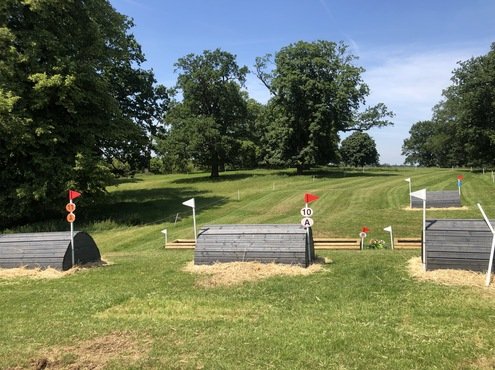 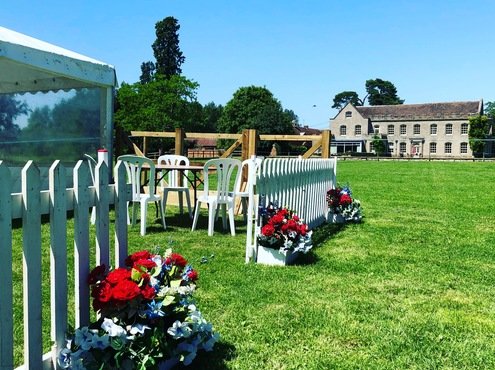 Most of the 2000m long cross-country track is mown, but sheep or cattle are also used to graze and help improve the quality of the turf / Historic Offchurch Bury, parts of which date back to the 16th century, is a traditional setting for equestrian events in Warwickshire

The river crossing, a feature of many events in the past, has gone out of use, partly as it is difficult to meet British Eventing specifications on water depth with a natural watercourse, but also as it is on a public footpath. An artificial water complex has taken its place.

Most of the 2000m long cross-country track is mowed, although one field benefits from being grazed by sheep or cattle.

"Sheep are brilliant, because they are less selective in what they will eat than cattle and you can really see how the grass has thickened up where they have been," he comments.

Dressage and show jumping arenas are mowed, but mindful of the risk of clippings clogging the surface, Lloyd may slit again afterwards, while he says that he also finds a Verti-Drain useful to get the optimum footing required for jumping.

Long hours are required to keep turf surfaces in pristine condition for equestrian events, whilst building the sward's resilience to constant pounding by iron-clad hooves, but the dedication shown by Lloyd, and by Grant and Tessa, should ensure that riders will continue to enjoy this historic equestrian venue for many years to come.