Oud-Heverlee Leuven is a Belgian football club from the city of Leuven, to the east of Brussels. It was created in 2002 from the merger of three clubs, FC Zwarte Duivels Oud-Heverlee, whose registration number it inherited, Daring Club Leuven and Stade Leuven. Their home ground is the King Power at Den Dreef Stadium, located in the city's Heverlee region. Lee Williams meets the club's Head Groundsman Oliver Makin. 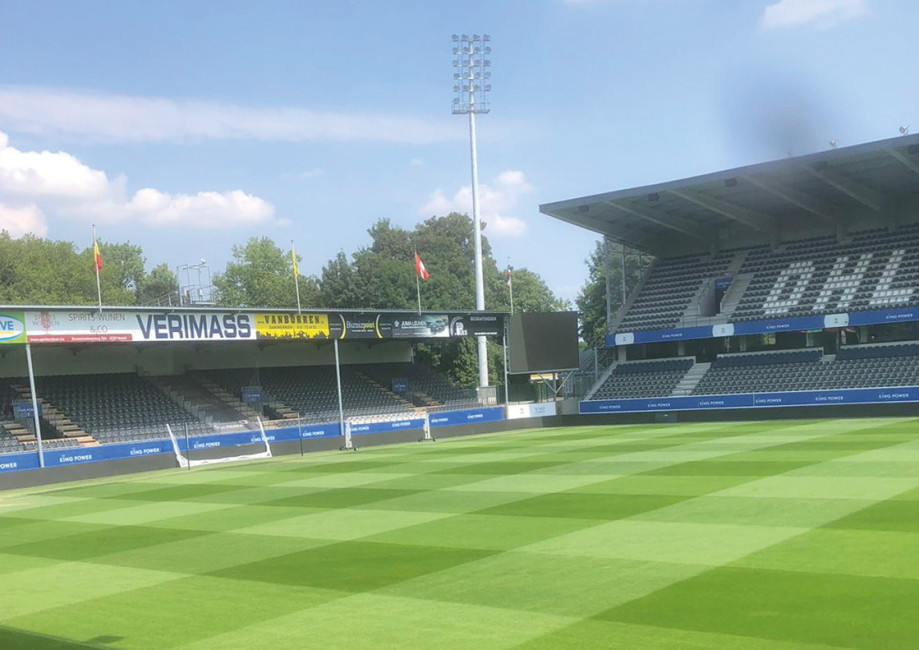 Oud-Heverlee Leuven currently play in the country's second tier, Belgian First Division B, but has played four seasons at the top level; the last time being the 2015-16 season.

With the establishment of Oud-Heverlee Leuven in 2002, the stadium changed its name from Leuvens Sportcentrum to Den Dreef and this saw a programme of stadium expansions to improve both facilities and capacity. These are ongoing, and the final phase should see capacity close to 13,000.

The club is linked with Leicester City Football Club as the two clubs are owned by the same owners (King Power) and a number of staff from Leicester travel between the two clubs, e.g. commercial guys, media guys etc.

Englishman Oliver (Oli) Makin is the Head Groundsman at Oud Heverlee Leuven (OHL), a role he took on eight months ago after leaving his post as deputy head groundsman at Scunthorpe United. "I was looking at jobs being advertised on the Pitchcare website when I came across this job. I read through it and immediately wanted to find out more so I sent my CV into John Ledwidge, Grounds Manager at Leicester City FC. I then got a phone call offering me an interview with him at the King Power Stadium, and, after that, John offered me the job."

Oli first got into the industry eleven years ago through Phil Collinson who, at that time, was Head Groundsman at Rochdale AFC but also looked after Norden Cricket Club. Oli played cricket for Norden and helped Phil with prepping the square and outfield, which he took great pleasure in. When Phil was looking for an apprentice to work with him at Rochdale, the perfect fit was Oli, who jumped at the chance to work as a full-time groundsman.

Oli made the big step to move abroad to OH Leuven because it was at the start of what looked to be an excellent project to be involved in. "Basically, everything was going to be brand new, and it's something I can now say I was part of from a very early stage. To help transform a very run-down training ground and stadium into what we have today has been a great experience so far." 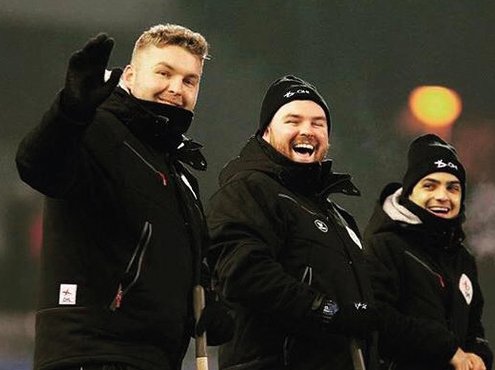 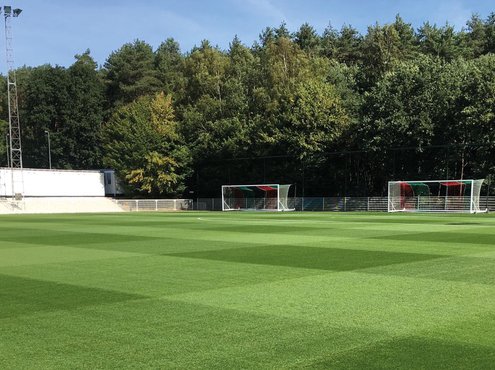 Happy in their work from left to right: Oliver Makin, Luke Russell and Kevin Marotta

On a weekly basis, Oli reports to John Ledwidge, to discuss the playing surfaces, budgets and fertiliser programmes. "We are regularly in contact via text messages and phone calls, just to keep each other updated with what is going on. I send him pictures every now and then to keep him in the loop with how everything is looking. John leaves us to get on with our work and do what we see necessary to keep the pitches to as high a quality standard as possible."

Oli's team includes Deputy Head Groundsman Luke Russell (25), and junior grounds person Kevin Marotta (21); both joined a little over seven months ago. "We also have Leon and Chile, two volunteers who are permanently based at the training ground. They are a great help to us. We also use a local contractor, Wim Fluyt. His knowledge of Belgian regulations is a great help when it comes to knowing what products we are allowed to use here in Belgium."

Together, they look after the stadium pitch, which is a Desso PlayMaster carpet on top of a few sand bands into a clay soil. At the training ground, there is a Mixto carpet pitch which is constructed entirely on a substructure, with a full drainage system and undersoil heating. There is also a brand-new Fibresand constructed pitch which is fully drained, and two grass surfaces which have been sand banded into sandy soil. All the pitches are fully irrigated. There are also two artificial pitches which are open to community use.

Oli explains the general maintenance of the pitches at the stadium and training ground. "During the summer, we cut the stadium pitch between 23-25mm using the Cub Cadet Infinicut 34s. With it being a hybrid carpet, we regularly rake the surface with a tractor mounted rake. Rotary mowers are used; either the Honda rotaries or our new Dennis PRO 34 rotaries. We aerate with a Charterhouse Verti-Drain down to a depth of 8-10 inches, and we have a Toro ProCore which we use at varying depths and speeds. We mark out with a Pitchmark hybrid marker with Eco Line+ paint. We have a problem with rabbits, so we spray the artificial track with a natural deterrent to keep them away." 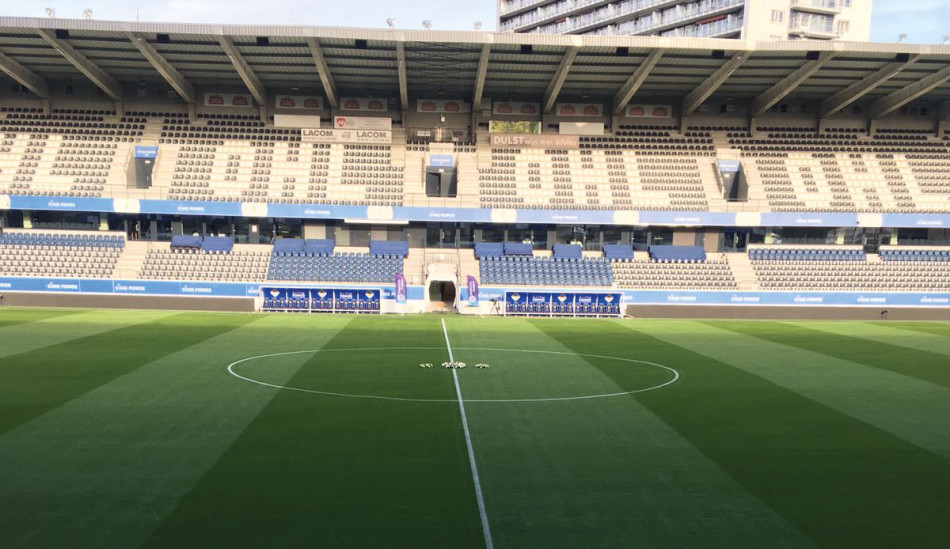 "At the training ground, we mow with a Baroness triple mower at 25mm in the growing season, then up to 28mm in the winter months. We will use the Dennis rotaries and Infinicuts on the main show pitch. We rake the carpet pitches with the tractor mounted rake. Aeration is carried out on the pitches with a Verti-Drain and, occasionally, we will transport the ProCore over from the stadium. Cleaning out of the artificial surfaces is undertaken with a Charterhouse Verti-Top."

To help with the maintenance of the pitches, and to cope with changing weather conditions which include a few touches of frost and a lot of rain, plus a shade problem on one side of the stadium, there are two SGL MU150 and two SGL LU120 lighting rigs, plus a MacLeod CoverMaster dome cover at the stadium, and a full set of Matchsaver frost covers for the Mixto pitch at the training ground.

Oli explains; "Working in Belgium is not much different to working in England as the climate is very similar. I sometimes don't realise I'm in another country until someone tries to speak Dutch to me and I reply to them English. Sorry, one day I will learn the language. The way of life is quite laid back here, which I like, as I think I am also quite laid back. In addition, Leuven itself is a beautiful city."

The club is currently using ICL products for all their fertiliser and liquids. These are presently being bought through a Belgian distributor, Taymans, with a rep from ICL making visits every now and again.

Renovation of the pitch is undertaken at the end of each season, and this includes taking the top off all the pitches with an Imants Koro Field Topmaker, topdressing, overseeding and fertilising. "Hopefully, next season, the stadium pitch will be fully reconstructed, and we are also looking at reconstructing a pitch at the training ground. From there, we will look at different options for the renovation of our remaining pitches."

Recent projects at the training ground have included a new groundsman's shed, which also consists of a 20,000 litre underground tank into which rainwater is collected from the roof, and a washdown area for machinery has recently been completed. 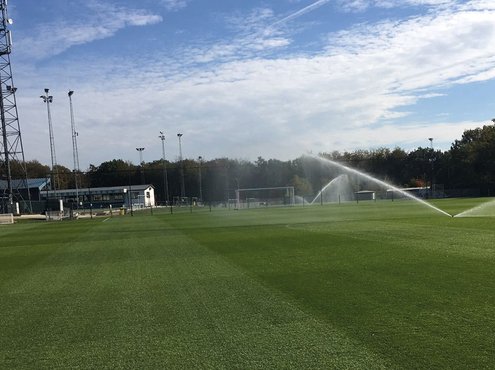 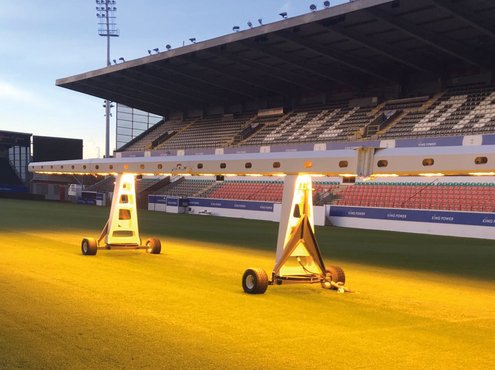 Last summer, all pitches got an extensive renovation and new pitches installed. The work on the pitches was carried out by EuroSportsTurf, and, for the smaller projects, local contractor Wim Fluyt was used.

The club supports the groundstaff with continued training and education. "We are currently in the process of putting Kevin on a Sports Turf course to aid his development. He is an incredible part of our team, and he's learning so quickly for someone who has never done this sort of work before. Maybe, in the future, we will look to add another apprentice to our team."

All machinery is bought outright from Platts Harris in the UK. "We have recently purchased two new Dennis Pro 34Rs which are great pieces of kit when it comes to cleaning up the pitch. The Charterhouse Verti-Drain and Toro ProCore are invaluable. Alongside our aeration programme, we will have Wim Fluyt come in twice a year with the big Verti-Drain."

Oli has a few items on his wish list for the future. These include a second Toro ProCore, Dennis G860s with cutting and verti-cut cassettes, three sarell roller cassettes for the Infinicuts and few more lighting rigs.

Oli believes our industry is on the up and is always moving forward with innovative ideas and new machinery, "I think we are slowly becoming more valued as groundsmen as the demand for better playing surfaces all year round increases. If we keep doing what we do and are always willing to learn and support each other as an industry, our profile will grow."

What's in the 'new' shed

You can read Getting Personal with Oliver Makin here