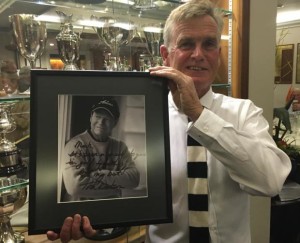 In a celebration dinner at the Heslington Course to mark the occasion, the head groundsman, who joined the club as a 16-year-old in July 1975, was presented with a signed photograph of the twice Ryder Cup captain.

With Watson having won his first Open championship 40 years ago at Carnoustie, the inscription read: "Mark, it's been a great 40 years in golf together. All my best, Tom Watson."

More than 110 guests turned out to celebrate with Mennell, who became head groundsman in 1989 and was present as the club held 23 consecutive European Tour events in the 1970s, 80s and 90s and welcomed many of the game's legends to York.

Mennell said: "I feel extremely fortunate that I have worked with, and am presently working with, a great set of staff. Without my passionate and committed team, the job would be impossible and I want to thank the lads."

Mennell, who was also presented with holiday vouchers, received letters of congratulation from a number of senior figures in golf, including the European Tour.

Andy Stubbs, managing director of the European Senior Tour, wrote: "The fantastic condition of the course was always remarked upon and the blood, sweat and sometimes tears, that you and your colleagues put into those events made them stand out and made Fulford a 'must play' tournament on the European Tour schedule in those years.

"When you look at the champions that we crowned over the years that you influenced, including Graham Marsh, Lee Trevino, Tom Weiskopf, Greg Norman, Sandy Lyle, Sam Torrance, Mark James and Peter Baker (making those fantastic putts on the 18th green to beat Nick Faldo), it must make you very proud and I'm sure each and every one of them would want me to thank you for the part you played in making those victories possible."

Mennell, who plays golf at Heworth, was also congratulated by the Yorkshire Union of Golf Clubs and by England Golf.

For the original article, visit www.yorkpress.co.uk.