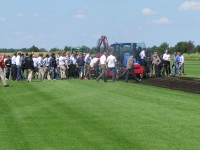 Superb weather, impressive demonstrations and a positive turnout have given the Turfgrass Growers Association (TGA) its most successful Turf Show to date.

The biennial event was hosted by member grower Q Lawns at its turf farm near Thetford, Norfolk on 24th June.

As well as attracting growers from across the UK, turf producers travelled from as far afield as Slovakia, the Netherlands, Norway, Germany and Italy to give the show a European boost. In total, staff from 58 grower companies attended.

TGA members and affiliates then gathered in the evening for a gala dinner at the Menzies Hotel in Cambridge.

Feedback from the event has been unanimous in stating that there was a huge feeling of optimism amongst those attending and exhibiting. 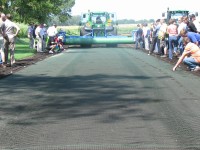 John Bailey, UK Sales Manager of exhibitor Moffett agrees: "As normal for us as a supplier the show was a great success. It gives us the opportunity to meet with old and new customers plus allows us to showcase new products. Overall, this year's show was well organized and laid out. One point that I picked up on was the increase in overseas visitors, which for us as a company selling worldwide makes the event even more appealing."

TGA Chief Executive Tim Mudge praised hosts Q Lawns for the superb site and those who exhibited and attended: "The TGA is extremely proud of its unique Turf Show and the quality of exhibitors is reflected in the high number of specialist producers, their staff and affiliated companies who attended this year's event. An added bonus is the recognition by European and Scandinavian producers that this specialist show has so much to offer."