Blackpool Cricket Club's Stanley Park is a 5,000-seater ground that is regularly used for county cricket matches by Lancashire County Cricket Club. It is one of the county's official outgrounds alongside Liverpool and Southport. This year, they will host the Royal London Cup one day game against Worcestershire CCC on 8th August. Lee Williams met up with Sam Dutton, the club's twenty-seven-year-old Head Groundsman to discuss the work undertaken.

Situated in the heart of Blackpool, one of England's most loved seaside resorts, its famous tower is clearly visible when standing in the middle of the Stanley Park cricket ground and, long after the cricket season has finished, the equally famous illuminations light up the night sky.

Following concerns expressed by the county side on the condition of the outfield, major renovations have been carried out to address the problems. Lancashire last played here in 2018 against Warwickshire CCC.

Thomas (Tom) Myerscough, Sam's helpful friend and mentor - who, by day, is an Environmental Scientist - tells me more. "The project had been in the pipeline for quite some time. In 2015, Lancashire put in a new county pitch on the square, which gave them three pitches to play on, allowing them to hold festivals or two one day games. Then, in 2018, it was suggested that we should look at investing in improving the outfield surface. It was full of thatch, holding on to water like a sponge and would flood, causing many of our league games to be called off. We told the council of our plans, and they were happy to get on board because, when it is sunny and we have a county game on, we can attract a crowd of well over four thousand people. The place is bouncing, it is great for the area." 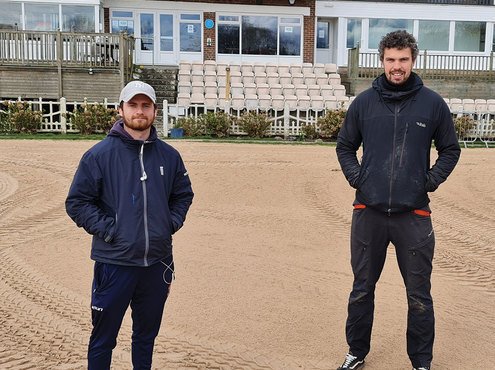 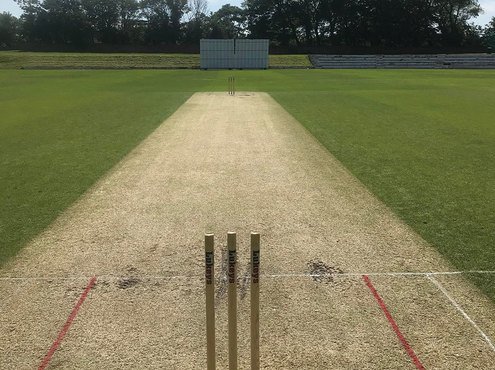 When Sam first joined the club two years ago, the ground's scoreboard end was under water and, after the water subsided, he could see the earth had moved underneath. "Blackpool is a flat ground, but Tom and I stood at the backward point of the square and, at the edge of the outfield, we were four or five foot above the batsman; this happened over just three months. Being in Blackpool, you would think the ground is built on sand, but it was actually a lowland peat bog at one stage before it was developed. They had to shift a lot of earth to make it flat and imported a lot of heavy clay, but there is still some peat knocking around."

"In 2019, we carried out a lot of hollow-coring to try and help relieve some of the water tension in the surface, and we shifted some serious material. It did make a difference, especially on the far side."

In 2020, Sam and Tom decided that the work they had carried out was never going to be enough to help solve their problems with flooding. So, they approached the club and asked them to look at carrying out the project that was first mooted in 2018. "To our surprise, they agreed and were happy for us to put the work out to tender. Once all the quotes came back, we chose J Mallinson (Ormskirk) Ltd to carry out the work."

Work started in September 2020, and the job should have been completed by the end of October but, with the harsh weather conditions bringing heavy rain and frost, they are now due to finish at the end of March 2021. "I think, in some ways, it has been a blessing in disguise," comments Sam. "I have seen other grounds that have been overseeded in October that looked alright, but they are a bit patchy. Also, with COVID, I had been furloughed and was not able to spend much time at the ground. So, at the same time the project is completed, I will be back full-time to get everything ready for the start of the season … fingers crossed."

Tom, a keen cricketer with a love for turf, had gained a lot of knowledge over the years working on various other cricket grounds and volunteered to manage the project for Sam whilst keeping him informed of developments. He explained what work has been carried out. "Mallinsons started by koroing off the surface, to a depth of 20mm, to remove as much of the thatch as possible. After the first pass, we realised this was not deep enough, so we took core samples from twelve points around the outfield and found the thatch's average depth was around 27mm. So, a second pass was carried out to remove most of the remaining thatch layer. After koroing, we found that, at the south end, the levels were not quite right, which meant we would have ended up with a significant rise on to the square. Instead of having a three-metre cut off point at the end of the square, which we have at the North end, it is now one and a half metres to help blend those levels in, so we do not end up with a gully below the end of the square. We are aware that, for the first year, this could be potentially problematic for fast bowlers because the take-off point will be inside the new outfield, but we are hopeful that it will be the best outcome in the next two to three years."

"Once the koroing was completed, we moved on to the installation of the drains. The plan was to drain the whole site, essentially to the ring drain using all longitudinal drains, but that changed because of the levels they found once the outfield was koroed off. So, instead, they decided to go with longitudinal and lateral drains, which is probably much better in the long run."

"The next steps involved cultivating the site to relieve compaction and to break-up any of the thatch that remained. Then we applied six hundred tonnes of rootzone from Everton's training ground, which was then incorporated into the existing profile to improve the levels, mainly on the south side of the ground. Once they were happy with the levels, it was rolled flat and sand banded." 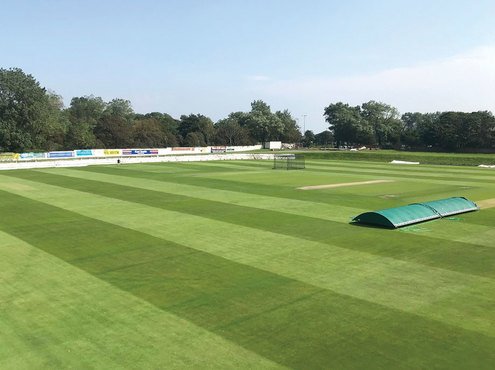 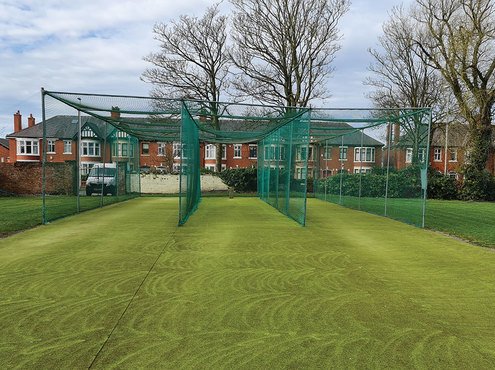 The project was moving on nicely until the rain started to fall, delaying work for four months. In that time, Sam was able to see the difference the drains had already begun to make. "I have lived in Blackpool for three years now, and I have never seen Stanley Park, in which the ground sits, so waterlogged, but our outfield was dry."

Sam is now back in charge of the project and talked me through the final stages. "Once all the sand has gone down, Mallinsons are going to verti-drain to help relieve any compaction that has occurred whilst the work was carried out. In the final stage, they will tiller out the surface and roll ready for overseeding at 45gm2 with a ryegrass mix using a dimple seeder."

Sam now has a big challenge on his hands, bringing through a new surface from seed with limited resources. I asked him if we have a warm and dry April, as we have experienced in recent years, how he plans to get around the fact he has a limited irrigation system. "Firstly, I will hope and pray the weather is on my side. In the worst-case scenario, we will call in the fire service, as we have done in the past. Tom and I have been badgering the chairman to install a ten thousand litre tank that would give us one hell of a head start, not only now but also during the season. But obviously, this is a considerable expense on top of the money the club has spent on the outfield, meaning it will have to be something we look at again further down the line."

I was interested in knowing how they have managed to maintain the square whilst all the work has been carried out around it. Sam explains, "Before the work started, I cut the square down to 5mm; with the lack of play, I found myself scarifying more heavily with our SISIS Rotorake 600, taking out five passes in varying directions. It was then spiked, overseeded with Rigby Taylor's R9 100% Ultra Fine Dwarf Ryegrass seed mix and topdressed using Surrey Loam GOSTD 125 and Supernatural on the Lancashire pitches and brushed in. I was lucky to get all that done before the job started properly. After renovations, we were okay for a while, until it began to grow again, and I found myself having to rally the troops to help me carry the machines over to the square, which was interesting. Once it dried out, I was able to go across."

"Since August, I have been on furlough, so I have just been in to keep things ticking over on the square as much as I can, with Tom's help at the weekends."

Once taken off furlough, Sam could spend more time manicuring the surfaces ready for the new season's start, which he is very much looking forward to after last year. He talks me through his maintenance process of the square. "From March, I will keep my square around 20mm and gradually take it down to 14mm, which I will keep for the season. I will try to keep the outfield approximately 35mm once it has established, but will progressively take it down to 12mm during the cricket season. I power wash my main machinery once a week, or at least blow the cylinder after use, and I feed the square every 4-6 weeks during the season to keep the leaf and roots as healthy as possible."

Tom is keen for the club to enhance the ecology around the site, especially as it is situated right next to Stanley Park, a fantastic area for ecology with its incredible selection of trees and greenery. "We do have wildflower areas around the ground which are allowed to flower and set seed before a regular mowing regime starts. We do get a good number of birds visiting the site, and we regularly see Oyster Catchers on the square; this year, I plan to put up some bird boxes. We are careful when applying products to reduce the amount of chemical runoff into the drains. We also have gardens that are maintained, and rainwater harvesting is being considered at the site."

After playing cricket in Australia, Sam needed to focus on his career, which involved staying close to his passion. So, when he was offered the chance to work at Barrow Golf Club as an apprentice and gain his NVQ Levels 1 and 2 at Myerscough College, he jumped at the chance, knowing this would help him get the experience he would need to one day become a cricket groundsman. "After a few years, I joined South Lake Services, a contracting company that looked after the turf and gardens at schools, posh houses and holiday lodges. Two years ago, I was given the dream opportunity to join Blackpool CC as an assistant groundsman by the chairman; I snapped his hands off. Initially came here with the promise of gaining experience under the Head Groundsman Chris Mackay, but then he left after two months. I was then made Head Groundsman, throwing me in at the deep end. I had little knowledge of maintaining a square and that is when Tom stepped in to help me out. Since 2019, he has guided me through the maintenance, renovation and feeding processes, and I have also gained a lot of experience by just doing the job."