Five minutes into a demo of the Turf Tank One, Haileybury School Grounds Manager, Andy Richards, knew he needed one. 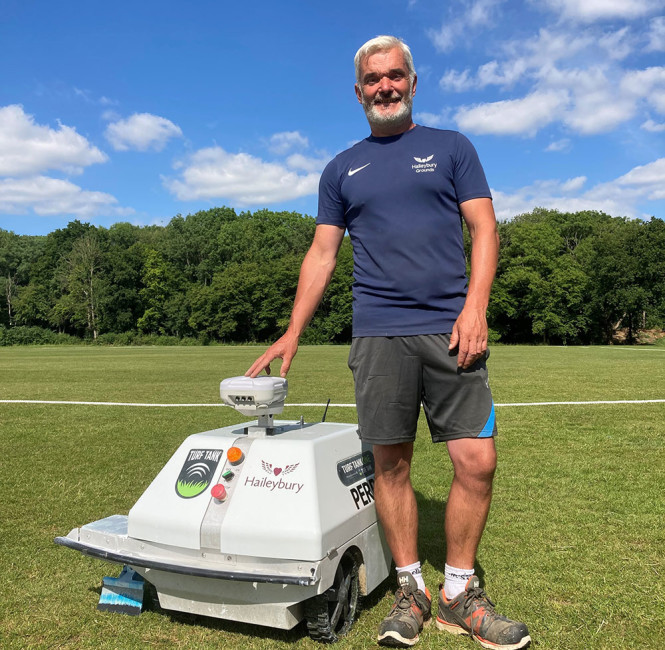 Andy, who has been at the private school for three years, was sceptical about the overmarking ability of the robot, having looked at alternatives over a three-year period. But, the accuracy, quality of the lines and undulation capabilities sold it to him.

With 20 sports pitches split between football, rugby and lacrosse to mark and athletics in the summer, Andy's primary focus was initial marking. During renovations and changeovers between sports, he found his skilled groundsmen were removed from crucial maintenance for up to two weeks.

To combat that, he had to become over reliant on using contractors. This became a costly exercise and was not as flexible as determining your own pitch line-marking schedule. So, when Andy weighed up the costs for the initial marking against having the accuracy of the Turf Tank One all year round for consistent and regular over-marking, the robot more than justified itself.

"My main concern has always been overmarking because I never thought GPS robots were accurate enough to overmark. So, when we had the demo from Turf Tank, overmarking was the major thing."

"To be honest, because I'd seen so many other GPS markers, either push ones or robots, I was sceptical. But we within five minutes of seeing the Turf Tank in action on the demo, I said I'd buy it because I was so impressed with the quality and precision of the line."

"I've used laser markers in the past, and I genuinely thought we'd still use one on our first team rugby and football pitch. But it would be hard for most people to tell the difference between the two, which has been a massive eye opener for me."

For Andy, utilising the Turf Tank One is also a direct response to the skilled labour shortage in the turf industry, and it was a primary consideration of the school when weighing up their decision.

"To take out one of your most skilled jobs and give it to a robot is almost a no brainer. I've got someone now from a different field of expertise, but very keen to learn, and we can now send him out with the robot, and within two hours, he can mark out a running track, a lacrosse pitch, discus, javelin and shotput before break time. And it's done accurately and perfectly, and it's just unbelievable because it would have taken one or even two skilled groundsmen until lunchtime. Now I can use their skills and time to improve other areas of our maintenance programme."

Since receiving their robot in December 2021, Haileybury has seen the full benefit. For example, marking six rugby pitches has gone from taking three people over two days to one person in two hours. Likewise, facilitating a last-minute request for a lacrosse pitch took 15 minutes to line, whereas before, it wouldn't have happened.

These advantages, along with the service from Turf Tank's Alex Robinson and Liam Pindred, have led Andy to give some simple advice to anyone considering GPS line marking: "Buy a Turf Tank. I honestly can't see a downside of it."