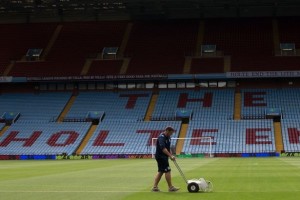 Both men were already part of the claret and blues' groundstaff and Mytton has been at the club for six years after a background working in golf.

Mytton is one of three full-time groundsmen tending the Villa Park pitch and despite a Bon Jovi gig at the stadium in the summer, the surface is up to its usual high standards.

Renowned as one of the best in the Premier League the pitch has been complimented by manager Lambert and the coaches.