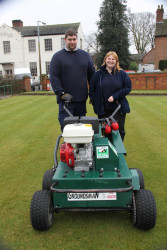 Many bowls clubs are finding it difficult to attract new members, and even those that do play are at the 'higher' end of the 'age scale', and balancing the books can be difficult.

On average, bowls clubs have around 100 members paying £30 a year plus match fees. So, a total income of about £3,000 leaves little in the coffers for work on the green.

It's a dilemma. Traditionally, day-to-day upkeep of the green is carried out by volunteers but, when there are problems, they often do not have the skills to rectify them. And this is where a professional sports turf contractor can help.

One such club taking this route is Penkridge Bowls Club in Staffordshire who, last year, decided to call in a contractor to undertake the end of season renovations and provide expert and ongoing advice on their green. They believe that, by doing this, they will ensure a good quality playing surface for the existing members and, in return, attract new ones.

Their decision was prompted by areas of the green dying, an outbreak of dry patch and poor growth elsewhere on the sward. 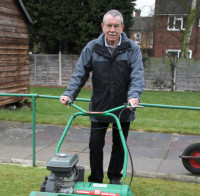 The company is run by Lee Paulley. It began as an Estate and Grounds Maintenance company back in 1992 but, by 2000, had become purely a fine turf contracting business.

Lee has a National Diploma in Horticulture from Rodbaston College and graduated from Reaseheath/Harper Adams with an HNC in Golf and Sports Turf. He is also the ECB Pitch Advisor for Staffordshire. Other qualifications have been gained through the ECB, FA, RFU, IOG and English Bowls.

Lee's partner, Lauren Jennings, joined the business on a full time basis in May of last year. She had always been involved behind the scenes, on the admin side, but now enjoys taking on an active role. Her favourite job is operating the Turfmech SQRL 600 - "Lee makes the mess and I clean up after him, it's just like being at home!" she says. Lee's mum, Jan, is also a valuable member of the team.

Lee was invited to Penkridge to assess the condition of the green. After examining profile cores, and physical and chemical soil analysis, a renovation programme was recommended.

The work carried out in the autumn began with scarifying the green in two directions, just touching the soil surface with a pedestrian scarifier to remove lateral growth and dead leaf tissue.

Renovation began with hollow coring with 12mm diameter tines to a depth of 100mm at 3inch spacings and core collection to reduce thatch, soil exchange and decompaction, using the Groundsman 460 HD aerator. This was followed by deep linear aeration with the Graden GS04 in two directions, the first at 37mm and the second at 43mm, collecting the arisings with the company's latest addition to the machinery shed, a Turfmech SQRL 600 pedestrian collector.

After germination, and growing in of the surface, the grass was topped to a height of 12mm. approximately eight weeks after renovation. An application of turf hardener 3:0:3+4%Fe+ 2%MgO, followed by a further application of 5:0:28+3%Fe, helped to strengthen the grass plant cells against fusarium and winter weather conditions.

Additional cuts of the green were carried out with the Hayter Harrier rotary rear roller mower as required to maintain a 12-15mm height.

As part of the aftercare package the company undertakes a programme of monthly aeration, carried out with appropriate tines for the time of year and/or soil conditions, from November to August, at a reduced cost.

Through the season a slow release fertiliser programme, linked to soil analysis, will be undertaken. This is due to the high sand content and recent summers of high rainfall and leaching of nutrients. Lateral growth and coarse grasses will be controlled by verticutting, and this should also improve green speed and consistency of roll.

A further application of a wetting agent early in the season, plus spot weed control, will also be carried out. At the end of the season, the condition of the green will be assessed and an appropriate end-of-season renovation recommended.

The club are also looking to purchase a fully automated watering system which, they believe, will help the condition of the green, especially if the 'hotter than 1976' summer arrives. Osprey Irrigation has drawn up a design specification for the club to consider. This work to will be organised once appropriate funds become available. They are currently applying for funds for this project.

With the club keen to attract new members, the move to employing the services of a contractor is seen as a positive one. With the correct maintenance now being carried out, with the appropriate machinery, the green has already improved considerably.

John Simpkis, and other volunteers, will continue to carry out the day-to-day duties, but with Lee Paulley keeping a close eye on things.