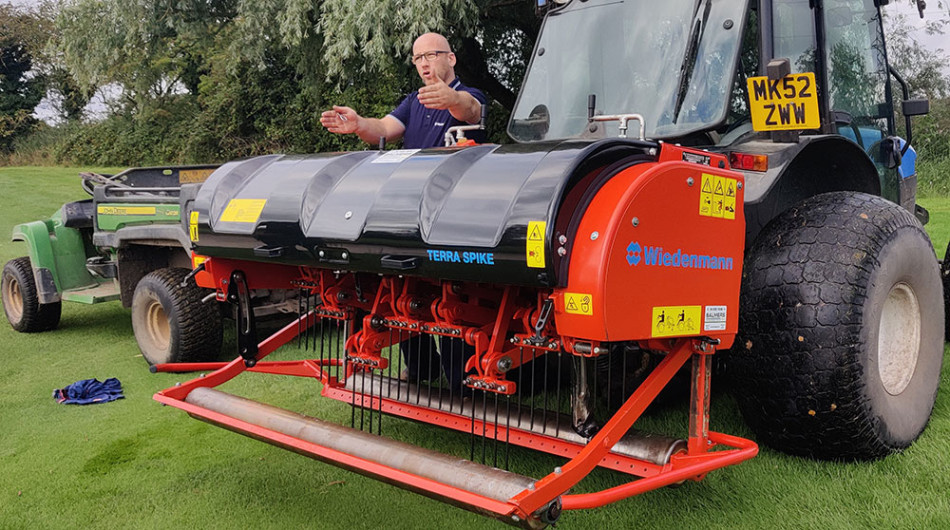 Preston's Penwortham GC is a fine parkland course, situated on the banks of the River Ribble. The northwest club is part of the prestigious Classic Lancashire Tour. It has an active year-round membership and a full-time greenkeeping team of five.

Head Greenkeeper, Steve Hemsley, has been in post since June 2021, and already is starting to tick off key projects on his list.

"Ours is quite a clay-based site, relatively flat and reasonably wet. The recently established USGA greens are doing well. Elsewhere, fairways and roughs are just a little too thatchy, so we needed to develop a regular aeration programme. We brought contractors in last winter, but it made sense to have a machine of our own," said Steve Hemsley

Following a successful demo with local Wiedenmann UK dealer, Balmers GM at Burnley, the club's machine arrived at the end of April. Wiedemann's lead demonstrator, Andy Kerr, along with Balmers' salesperson, Ben Cooke, returned to give a thorough session of induction training.

"Its first task, early May was to spike the fairways and some choice areas of rough with 20 mm diameter tines," continued Steve. "Our fairways aren't huge but with a 1.8 m wide machine we easily got finished in around 2 ½ days. When the contractor did the fairways, they went to 150 mm without issue, so with the new machine we targeted around 175 mm, getting more air into the profile and decompacting the surface underneath. Ideally, we'll go again in September and, conditions allowing, during the winter again, so three times yearly.

"I had the GXi8 at my previous club, Bolton Old Links GC, so was aware how much time we would save compared to the long-serving machine we retired. The shock absorption and the speed set it apart. The spring systems mean no shock is delivered to the tractor or the operator, so it is an entirely smooth operation. Speed for me though is the biggest thing. It's just easy to set up and go, just much less time out on the course interrupting play."

Penwortham's greens also had deep aeration in May to encourage deeper rooting. "After the fairways, we switched to 8 mm needle tines to do all greens. I've renovations booked in for mid-August so they will be done again then, but the priority is elsewhere in the course.

"During Autumn, with 20 mm tines we'll get back to the spiking the fairways to break up the surface underneath. Then we'll target the roughs and finally the fairways again in winter when conditions allow."