0 People and Service were what counted for Fleetwood Golf Club

Fleetwood Golf Club's Head Greenkeeper Terry Booth was delighted to be given the "go ahead" to order a ClearWater system recently.

The club, aware of current legislation concerning washpads and pollution prevention, wished to upgrade their facilities and believed, having read a number of articles, that a washpad water recycling system would be the future-proof solution. After a number of years, it was finally decided that funds could be made available and Terry Booth with director Brian Geddes researched the project. Details and prices were obtained, visits made and systems viewed and considered. BTME, incidentally, played an important part initially in the process as supplier stands were visited and information gathered. At BTME this year matters were finalised and an order placed for a ClearWater system soon afterwards.

Fleetwood lost no time and arranged delivery soonest having decided to "self-install" using their local experienced contractor. Terry explained that the cost savings offered on self-install by Acumen with ClearWater would be most welcome. Matthew Mears, Acumen ClearWater's sales and development manager, visited the club soon after the show to discuss installation and delivery arrangements. The system was promptly installed and in action, much to the delight of Terry and his staff! He's happy to show it to others interested too. 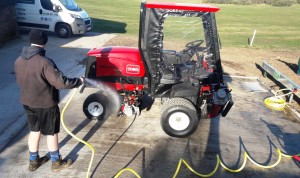 Brian Geddes expressed interest in the ECA (Enhanced Capital Allowance) scheme and the fact that the WTL (Water Technology List) approved ClearWater system qualified. Under the scheme, businesses can write off 100 per cent of the cost of qualifying plant and machinery against taxable profits in the year of purchase. This can bring significant financial savings and reduce the business' impact on the environment. Treasurer Andy Cartwright will be "on the case" said Brian!

Despite the savings available with self-install and the ECA scheme, it was encouraging to learn that "the number one factor for buying ClearWater" as Terry put it "was the people I have dealt with and the first class service received. We have built up a good relationship." People and Service do matter in any business relationship and not everything can be done over the internet either!