by Sarantis Michalopoulos
in Chemicals & Fertilisers
on 20 Jun 2016 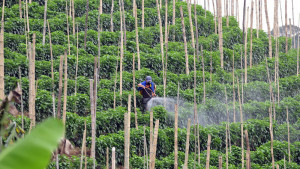 The Commission presented a long-awaited science-based set of criteria for identifying substances with endocrine disrupting properties of plant protection products and biocides.

Endocrine disruptors are still not regulated in Europe, as no formal criteria for identifying them in pesticides and biocides have been established so far.

Once adopted, the EU regulatory system will be the first worldwide to define scientific criteria for endocrine disruptors in legislation, confirming the Commission's commitment to ensuring the highest level of protection of both human health and the environment, an EU source told EurActiv.com.

The same criteria will also apply to products imported into the EU, and that is the reason why they will be notified to the World Trade Organisation.

"Today, Europe took a big step forward in safeguarding the health of its people," the source added.

The European Commission carried out an impact assessment to set criteria for identifying endocrine disruptors, a process that has been postponed since December 2013 claiming a lack of scientific consensus on the issue (See background).

The European Parliament recently slammed the executive for its inaction, and adopted a resolution on 8 June, demanding immediate action on the definition of endocrine (hormone) disruptors "in an objective manner" and not at the expense of public health.

"The specification of scientific criteria can only be carried out in an objective manner on the basis of scientific data related to the endocrine system, independently of any other consideration," the non-binding resolution reads.

Adoption of WHO definition

The European Commission said that the scientific criteria are based on the World Health Organisation's (WHO) definition of an endocrine disruptor, "for which there is a wide consensus".

The World Health Organisation (WHO) defines an endocrine disruptor as "an exogenous substance or mixture that alters function(s) of the endocrine system and consequently causes adverse health effects in an intact organism, or its progeny, or (sub)populations".

In order to speed up the procedures, as well as test EU agencies' readiness to apply the new criteria, the executive requested the European Food Safety Authority (EFSA) and the European Chemicals Agency (ECA) to examine whether already approved individual substances that show indications of being endocrine disruptors could be identified as endocrine disruptors according to the criteria in the draft texts presented today.

According to the Commission, the 'hazard-based' approach of the Pesticides Regulation will be maintained, meaning that substances are banned on the basis of hazard, without taking into account exposure to the substance. On the other hand, a risk-based approach would also include exposure.

This decision will most likely please countries like France, which insist on an approach "based on the intrinsic properties of hazard, without taking into account the potency" of the substance.

On the other hand, a solely 'hazard-based' approach is against the will of the pesticides industry.

Contacted by EurActiv, European Crop Protection, a trade group representing the pesticides industry, said that the Commission's proposal was disappointing.

"We are extremely disappointed with this proposal from the European Commission. After 6 years of hard work with input from EFSA, scientific, experts, and various stakeholders the criteria are no more than the WHO/IPCS definition, developed over a decade ago. We still consider this definition to be a sensible starting point, but this alone is not appropriate for regulatory purposes," ECPA's spokesperson Graeme Taylor stressed.

However, the executive noted that "grounds for possible derogations have been adjusted, so they are based on scientific knowledge and make the best use of available scientific evidence including information related to exposure and risk".

"Regulation by derogation is not acceptable, nor scientific, and expanding the derogations is essentially signaling a flaw in the criteria," Taylor added.

For the full article, visit www.euractiv.com.