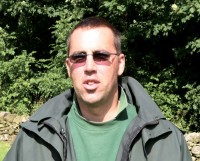 Who are you? Peter Smith, Head Greenkeeper at the Cavendish Golf Club.

Family status? Married to Sarah. We have two sons, Oscar, aged two, and Henry, who is two months old.

Who's your hero and why? Kenny Dalglish MBE, Liverpool legend - played football in a way that made you want to watch the game.

What is your dream holiday? Greek island hopping around the Cyclades.

What annoys you the most? Lack of respect and manners.

What would you change about yourself? Where would I start!!!!!

Who wouldn't you like to be? The Prime Minister!

Favourite record, and why? Simple Minds, Alive and Kicking, the ultimate singalong song!

Who would you choose to spend a romantic evening with? Who else could it be but my wife Sarah!

If you won the lottery, what is the first thing you would do? Take care of my family and friends.

If you were to describe yourself as a musical instrument, what would you be and why? Bagpipes, a lot of huff and puff, resulting in a whiney racket!

What's the best advice you have ever been given? Respect others opinions, whether you agree or not

What do you do in your spare time? Play golf and football.

What's the daftest work related question you have ever been asked? Too many to mention, but a particular favourite is the concerned member that once thought we were in dire need of some new tyres for the greens mowers, as they were bald!!!

What three words would you use to describe yourself? Passionate, dedicated and opinionated!

What talent would you like to have? To be a top professional golfer, playing all the world's best courses and earning money as I do!

What makes you angry? Lack of respect.

What law/legislation would you like to see introduced? Where would I start! I don't think this is a subject that you want to get me started on!!!!