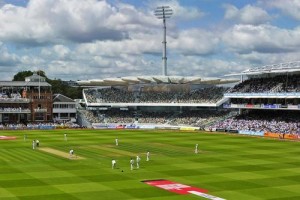 Marylebone Cricket Club (MCC) has announced the latest phase of its redevelopment plans for Lord's Cricket Ground in London, which includes the replacement of the historic Tavern and Allen stands.

MCC, which owns the venue, intends to have a single new structure built in place of the two existing stands - adding more than 5,500 seats - to raise the ground's overall capacity to nearly 30,000.

Designed by global sports architects Populous, the new stand is expected to be completed by 2019, with work on the first phase beginning in September 2015.

As well as replacing the Tavern and Allen stands, the second stage, which is the biggest planned phase of the Masterplan for Lord's, includes a new Thomas Lord Building, a new Tavern pub and internal reorganisation of the Pavilion to provide more room for cricket teams and staff.

Additional aspects of the project also include a new Harris Garden Building with a bar opening out on to the Garden, and additional dressing rooms both for tennis and squash players.

Derek Brewer, MCC Chief Executive & Secretary, said: "The South-Western Project will ensure facilities for players, match officials, supporters and MCC Members are of the highest possible standard by modernising areas of the Ground that have become tired.

"MCC is committed to maintaining Lord's as the finest cricket ground in the world, and this project also provides a wonderful new front door to the Home of Cricket."

MCC is continuing to consult with Members and local residents about the project, with the aim of submitting a planning application to Westminster City Council in the summer of 2015.