1 Phosphite - What’s all the fuzz about? 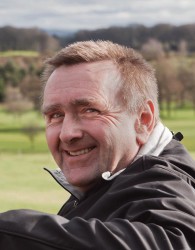 If you had mentioned the word phosphite seven or eight years ago you would probably have been met with a blank stare, which is what I gave when first hearing about it in 2005. However, since then, phosphite has become very much a buzzword and much has been said and claimed for it.

John Dempsey, Course Superintendent at the Curragh Golf Club in County Kildare, has been conducting his own trials and, in this article, explains the method and the results to date

So, what is phosphite, and what exactly can it do for turfgrasses?

Phosphorous is a major plant nutrient - the P in NPK - which, in plants, is taken up and used in the form of phosphate (PO4). Phosphite is very similar chemically to phosphate -its chemical formulation is PO3 - only one molecule of oxygen difference. However, where phosphate is vital for numerous metabolic processes in the plant, phosphite, because of its molecular shape, cannot be utilised by plants as a source of P nutrition and, importantly, should not be applied to plants which are deficient in P.

Phosphite is derived from phosphorous acid (H2PO4), which has a pH of 2.2 and, if applied directly to plant tissues, would cause burn. So, to prevent phytotoxicity, it has to be modified prior to use with a neutralising substance, the most commonly used being potassium hydroxide (KOH). When combined, these produce potassium phosphite (KH2PO3), which forms the active substance in numerous products currently marketed worldwide as either fungicides or fertilisers.

Since 2005, potassium phosphite products have been marketed in the UK and Ireland as biostimulants, or even defence activators, and are promoted as a means to reduce Microdochium nivale, the fungus which causes fusarium patch. 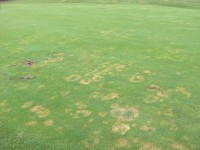 Microdochium nivale is an Ascomycete fungus, and the most common pathogen of turfgrass in temperate climates; it is the causal agent of fusarium patch and pink snow mould. Control of M. nivale in turfgrass is achieved by implementing Integrated Pest Management (IPM) programmes which reduce disease incidence to acceptable levels.

Chemical plant protectants are an integral part of IPM and, whilst the efficacy and safety of these products is not disputed, their use sometimes gives rise to a number of contentious issues:
- adverse public opinion due to the perception of high frequency of use
- associated costs of chemicals
- possible inhibition of non-target beneficial microorganisms
- development of fungicide-resistant populations
- possible legislative restrictions

This makes new or alternative means to reduce susceptibility to M. nivale a desirable target for turfgrass research. 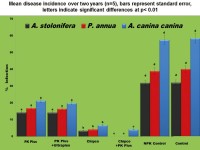 One possible means is the use of phosphite as a component of an integrated approach to disease management, and this is the subject of a research programme which has been on-going in Ireland and at the Centre for Research in Biosciences in Bristol for the past number of years.

The research has two straightforward questions to answer:
- Does phosphite suppress Microdochium nivale in turfgrasses?
- By what means does this occur?

To answer these questions, we have been carrying out extensive field trials and numerous laboratory procedures, which have produced interesting and significant results.

The basic aim of the research was to determine conclusively if phosphite treatments reduce M. nivale infection and, to do this, trial plots were established in 2010 here at the Curragh Golf Club. The plots are composed of three turfgrass species - Poa annua, Agrostis canina ssp. canina, and Agrostis stolonifera. Treatments comprise of sequential applications, applied bi-weekly from September to March each year using 20 litre capacity knapsack sprayers calibrated to deliver 800 l/ha2.

The plots are assessed each month for M. nivale occurrence and rated on a scale of 0-100. Turf quality (which excludes the impact of disease within each plot) is also measured and assessed visually and marked on a scale of 1 - 10. 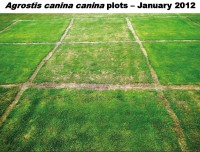 In each year of the study, M. nivale occurrence developed naturally, with high levels of infection from October to February. Data from both years' trials determined that the control plots, as would be expected, displayed the highest levels of disease incidence but, importantly, the application of potassium phosphite reduced the incidence of the disease by more than 50%.

The treatment which was most effective at reducing M. nivale incidence was the combination of iprodione (Chipco Green) and potassium phosphite. These fully inhibited M. nivale incidence on the majority of plots, this total inhibition indicating either differing modes of suppression or a possible synergistic effect.

Turfgrass quality at the beginning of the trial periods was uniform for all plots. As the trials continued, the quality of all plots not receiving phosphite became progressively poorer. By comparison, the quality of all plots receiving the PK Plus phosphite applications improved each month. Interestingly, the Chipco treated plots, even with significantly less disease incidence than the phosphite treated plots, produced a poorer quality sward of less density than the phosphite treatments.

By the end of the trial periods, the quality and density of all phosphite treated plots were far superior to all other treatment regimes.

What has been concluded from these trials is that sequential applications of potassium phosphite significantly reduced Microdochium nivale incidence and led to an enhancement in turfgrass quality. 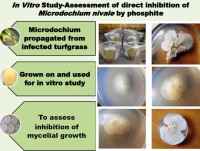 Phosphite mediated reduction of M. nivale has now been established, but the question remains how does this occur? There are two possible methods:
- Direct, which means phosphite acts as a fungicide and kills or stops the growth of the pathogen
- Indirect, by stimulating the turfgrass plants natural defence mechanisms.

To test whether phosphite acted directly on the pathogen, we carried out a range of studies. This involved propagating M. nivale samples taken from infected golf greens. This was then used for a range of laboratory studies which assessed phosphites effect on Microdochium mycelial growth. The fungal mycelium was grown on petri dishes which had been amended with various concentrations of phosphite. We then compared growth to mycelium grown on phosphate and unamended controls.

What has been learned to date with this section of the research is that phosphite, when in contact with M. nivale, directly inhibits the mycelial growth and conidial germination and causes disruption of hyphal morphology. In the plant, this means phosphite slows the growth of the pathogen, causes release of stress metabolites, thereby allowing for increased time for the plant to initiate defence responses.

What happens when phosphite is applied to turfgrass?

Whilst we knew how phosphite inhibited the fungal growth in the laboratory, we wanted to know if the same happens in the field - in other words, what happens when phosphite is applied to turfgrass. We needed to measure the assimilation rate, track translocation and determine accumulation amounts of phosphite when used as a foliar application on golf greens.

We did this by applying the phosphite in spray, collecting leaf, crown and root samples over a period, and then analysing them using a laboratory procedure which separated and quantified the individual ions of phosphite and phosphate.

What we found was interesting and significant, especially for those of us who are regularly applying foliar feeds to our turfgrass.

The research shows that phosphite is rapidly assimilated by turfgrass and translocates throughout the entire plant. The chart above shows phosphite accumulations in turfgrass over six weeks. Importantly, at forty-eight hours post application, amounts were almost 5000ppm, proving rapid assimilation. Amounts declined to 2561ppm after two weeks, indicating a three to four week application cycle would maintain levels consistently around 4000ppm. The analysis

also determined that phosphate amounts, in both treated and control plants, were not significantly different, confirming that phosphite is not metabolised in the plant to phosphate.

A longer term study is showing that metabolic rate affects the amount of time phosphite persists in the leaf tissues, with a trend for increases in accumulations in meristematic tissues.

Our analyses of phosphite treated turfgrass tissues determined rapid in planta accumulations, symplastic mobility and no in planta conversion to phosphate. 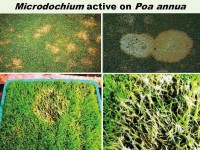 All the research outlined above is still ongoing, with the field trials and laboratory work are continuing to provide valuable data.
Our current research is also looking at the possibility that phosphite can reduce M. nivale infection through enhancement of the turfgrasses natural defence processes.

Does Phosphite enhance the defence responses in infected turfgrass?

Obviously, we first need to understand the Microdochium infection process and turfgrass responses before we can determine if these responses are stimulated by phosphite treatment. We are presently studying this using pot samples and infected greens, and employing a range of microscopy procedures.

It will be a further two to three years before the study can be fully published and then, hopefully, will give a valuable insight into the question "So what is phosphite and what exactly can it do for turfgrasses?"

In summary, what can be concluded from the results of this research to date is that routine and sequential applications of phosphite, as part of an integrated disease management programme, whilst not reducing M. nivale to an acceptable level, will significantly reduce the incidence and severity of the disease. Furthermore, the addition of phosphite to a fungicide can significantly enhance suppression of M. nivale.

This article was originally published in Greenside magazine, the official publication of the GCSAI.