17 Pitchcare Editor to move on 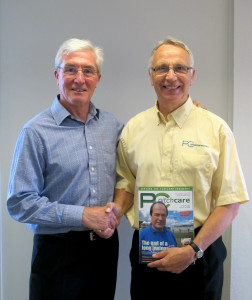 Laurence has been with the company since 2004 and has played an instrumental part in establishing the Pitchcare magazine as the leading sports turf publication and the website as the leading resource in the industry.

Talking of his departure, Laurence explained, "I've had a fantastic 11 years with Pitchcare and I'm very proud of what we have achieved in that time."

"I have lots of friends and contacts in the industry where I have spent most of my working life, and I plan to keep involved in some way. I would like to take this opportunity to personally thank many of these contacts who allowed me the chance to befriend them during my time as Editor. It has been a dream job producing the Pitchcare Magazine, which in itself has been a fantastic vehicle for promoting our wonderful sports turf industry."

"I do not intend to stop working just yet, I just felt I needed a change of direction and take some time out to seek new opportunities."

Operations Director, John Richards, has worked alongside Laurence for all those years and comments, "To many people in the industry, Laurence has been the face of Pitchcare, with his wide network of contacts and knowledge. Thanks to his contribution to the website and magazine, we are regarded as the industry's leading media service. There is no doubt that Laurence has played a major part in our success over the years. I consider him to be a good friend and we all wish him well for the future."