0 Pitchcare Magazine - Racking up a ton

Back in May 2005, before either Facebook or Twitter had launched to an unsuspecting public, the Pitchcare website was one of the few places that turfcare professionals could communicate with each other via our message board. As is his way, Dave Saltman wanted more to be able spread the 'Pitchcare' word and ideology.

The website had been up and running for just over three years and growth had been 'steady', thanks in the main to Dave's dogged determination and John Richards' steady hand on the rudder.

So, when I found myself 'in between' jobs following my departure from Turf Professional magazine, a phone call from Dave (whom I had previously met at various industry demo days and exhibitions) interrupted my golf asking what I could bring to the Pitchcare table? To cut a long story short, I suggested that he needed a hard copy magazine and I was his man!

Dave liked the idea, on the proviso that it paid for itself. John was not so sure but was convinced into 'giving it a go'. 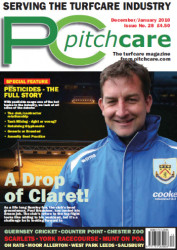 So, on the 24th May 2005, coincidently the day my first grandchild was born in the wee small hours, I found myself driving up to Wolverhampton from Salisbury Hospital maternity unit - in a pink shirt in honour of my granddaughter - to meet the Pitchcare team.

The small office in the Wolverhampton Science Park was where I first met John Richards, web monkey Alastair Battrick, Dan Hughes and the 'enthusiastic' Laurence (Loz) Gale. Apart from a part-time accounts lady, that was the team.

It was agreed that we should aim to get the first issue out by the end of June so that a second issue could be produced ahead of the Saltex exhibition at Windsor, thereby helping to grow the magazine readership.

So that left me around three weeks to source a printer, sell advertising and get it posted out for the end of June. Fortunately, Loz already had enough articles from previous website features to fill the magazine, but he was also tasked with speaking to the groundsmen at the Ashes Test venues to find out how preparations were going. Subsequently, Lord's groundsman Mick Hunt would feature on the first cover, along with Essex CCC's Head Groundsman Stuart Kerrison and Chartered Biologist Doctor Kate Entwistle. 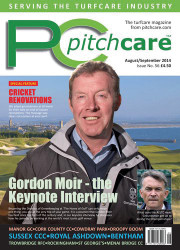 Securing advertising was 'interesting!' One potential advertiser greeted my call with; "why does this industry need another f**king magazine?" and a few others were dubious about its launch.

Nevertheless, I managed to secure enough revenue to be able to print and post - and pay my wages - and the first issue, containing 48 pages, 'doormatted' at the end of June after a somewhat frantic three weeks.

Advertisers in that first issue included, John Deere, Ransomes, Toro, Dennis Mowers, Lloyds of Letchworth, Hunter Grinders, Ecosolve, Allett Mowers, BLEC, STM, SCH and Imants, plus a few that are no longer trading. We had a full classified section too, which I was encouraged by as they had committed for a year!

It is pleasing to note that most of those original advertisers continue to support us and, for that, I am very grateful.

So our stall was set out. One thing that always bugged me with other industry magazines (including Turf Professional that I had worked on) was that they filled their pages with press releases, scattered with the occasional feature article. In short, every magazine's content was pretty much the same. So we made the decision not to carry PR in the magazine, but to feature people profiles - the groundsmen and greenkeepers working at the coalface - technical articles, training and education and relevant industry news - and that the design would be more FHM than Country Life!

That formula proved to be a success, perhaps with a few clients chuntering along the way, and issue 2 rose to 60 pages with more advertisers coming on board. Loz was now working his socks off sourcing new feature content, which proved successful, and even the chunterers saw the merits of the magazine.

Over the past sixteen and a half years the content of the magazine, and indeed the website, has remained true to its initial ethos and the magazine now averages 132 pages per issue.

At the fifty issue mark, Kerry Haywood, herself an experienced writer and designer within the industry, joined us as editor, with Loz eventually moving to pastures new in 2015. 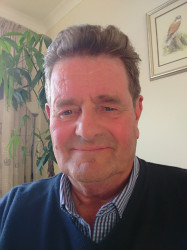 We've raised concerns over a number of important issue including rubber crumb infills, the use of agricultural chemicals, conservation and ecology, pay scales, mental health and much more, all the while championing the use of natural turf over artificial. And we will continue to do so.

A big thank you goes to all our advertisers who make the whole thing possible, and to the countless greenkeepers, groundsmen and technical experts who have helped us to provide such a vibrant and meaningful magazine.

So, here we are at our 100th issue. As Kerry said in her foreword, it's been fun to be able to provide this magazine for the industry and, whilst I can't see me personally celebrating our 200th issue, I know that the magazine, now under the ownership of Agrovista Amenity, is in safe hands.

ENTER OUR CELEBRATORY PRIZE DRAW AND WIN A DENNIS MOWER