0 Play continues thanks to Souters Sports 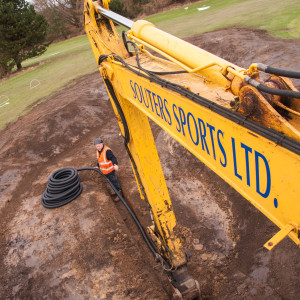 Souters Sports, one of the UK's leading sportsturf contractors, has recently carried out extensive drainage works at Dunikier Golf Club in Fife, to help allow for almost uninterrupted play during wet weather.

The golf club has had a history of poor drainage, which was highlighted by the terrible weather that the UK experienced last year. Predominantly clay based, the ground at the course is prone to flooding and the heavy rainfall would often cause the fairways to become waterlogged and un-playable.

Alleviation works included the opening of a series of swales across the centre of the course where the existing piped drainage was unable to cope with the flows required, as well as increasing the capacity of the existing drainage system. Decorative headwalls were also introduced along with other works including reshaping of bunkers and green surrounds, turfing, hydroseeding and gorse & broom planting.

Following a competitive tendering process, Souter's in-house labour and plant combined with their ability to provide a high quality service was certainly one of the many reasons why they were chosen.

"Having a heavy clay surface, we obviously experience some drainage problems," says Paul Murphy, Golf Course Operations Manager for Fife Golf Trust. "Last year brought those areas which needed the most attention into focus. We aim to stay open as much as possible despite the weather and I am absolutely delighted with the work that Souters Sports have done. We never want to close the course and the new drainage system gives the course that extra edge".

Souters Sports has completed extensive drainage projects on many other golf courses around the country including Gleneagles, the venue for the 2014 Ryder Cup.