As a sole Groundsman, Robin Wilcox has his work cut out looking after the 19 courts and 5 croquet lawns that make up East Dorset Lawn Tennis and Croquet Club (EDLTCC). On the sites nine grass courts, DLF's ProMaster 36, and its tolerance of low cutting heights, has given Robin the advantage - freeing up time for the other tasks which keep the courts and lawns competition ready. 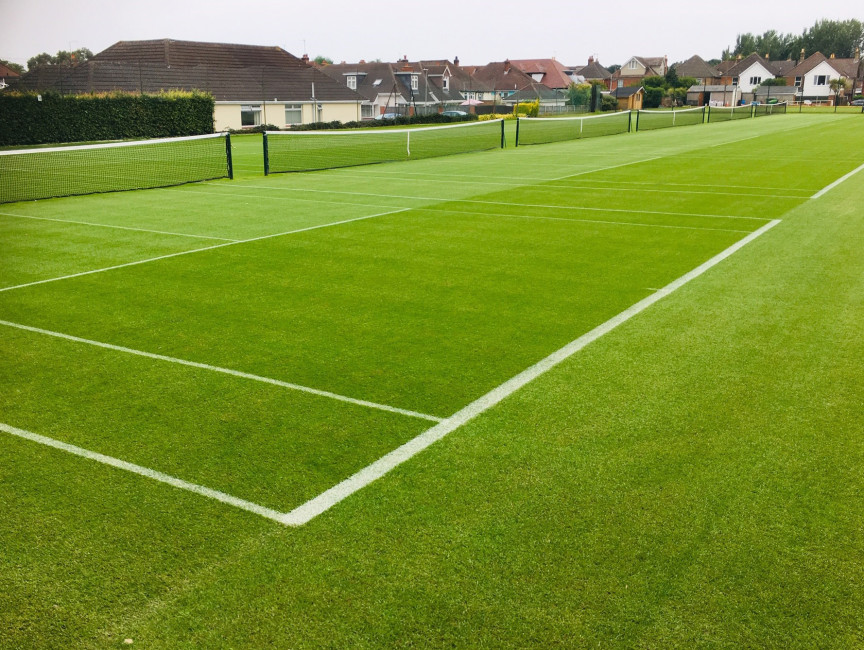 One of Robin's key goals when he joined EDLTCC two years ago was to bring the grass courts up to standard required to be selected, once again, as a host for the qualifying stages of The County Cup. "Over the years the courts had accumulated layers of thatch, so we could have gone down the road of scarifying and adding additional loam, but we decided to go for a full renovation." During his first year at the club, Robin skimmed off the top layer, cultivated, levelled and seeded with Masterline PM36 perennial ryegrass mix.

"A great combination of warmth and rain in the late summer/early autumn of 2018 meant the courts were green in under three weeks and I carried out the first cut at six weeks - everybody at the club was amazed at the germination. Our artificial and clay courts took the strain while the grass courts were under renovation but when they re-opened for play in 2019, there was a new wave of members wanting to play on the grass and they coped, and recovered, from the high levels of wear very well."

The decision to go for a pure-rye mix gives Robin the playing and resistance characteristics he requires, even under close mown conditions. "Because of my workload, I have to split my time between the artificial courts, grass courts and lawns so this means I am limited to mowing just twice a week. With the PM36 mix, it is hardy enough to cope with going as low as 5mm without any detrimental impact on turf quality."

While a final decision by the LTA is expected at the end of May, at the time of writing the County Cup remains in the tournament calendar and the improvements Robin has achieved sees EDLTCC chosen as a host venue, after a few years absence. "It's fantastic news for the club." Robin concludes, "Everybody is delighted with the results of the renovations - the PM36 has delivered great quality courts fit for top level play once again."

Pitchcare are an appointed distributor of the products mentioned in this article. Visit the Pitchcare Shop to view our full range