The grass definitely is always greener for a Kingsbury entrepreneur who has turned his pocket money hobby into a successful award-winning business. The seeds were sown for Kingsbury Lawn Care when 28-year-old Jack Chapman was just fifteen years old and mowing lawns in the North Warwickshire village. Now he employs three members of staff, specialising in lawn treatments and renovations at almost 900 homes across much of the West Midlands.

Kingsbury Lawn Care's success has just been rewarded with a top accolade at the West Midlands Federation of Small Businesses Awards.

Competition was tough for the Micro Business of the Year title, which celebrates small enterprises with fewer than 10 employees who are 'punching above their weight'.

Judges were looking for businesses which have demonstrated strong revenue growth and a product or service that stands out for its high quality.

As winners of the regional final, Kingsbury Lawn Care will be heading to Glasgow for the UK finals in May.

This latest gong builds on a previous history of award success for Kingsbury Lawn Care, which won Trades Business of the Year in both the 2018 and 2019 Tamworth Business and Community Awards, and became a Theo Paphitis Small Business Sunday winner in 2020.

"Remarkable that our team of four have propelled us to this"

Delighted, Jack said: "We're over the moon with this result. With five impressive finalists in the Micro Business category, including businesses double our size, we did not expect to be getting called up to the stage to accept the first award of the afternoon at the FSB Awards held at the Forest of Arden Hotel and Country Club.

"Being recognised at the Tamworth Business and Community Awards pre-pandemic was brilliant for our business. To now be taking this beyond just trades businesses and from a local to a regional, and now a national level, has been a lot to take in over the last two days. It is remarkable that our team of four have propelled us to this. We are incredibly excited for what the next few weeks and months have in store for us." 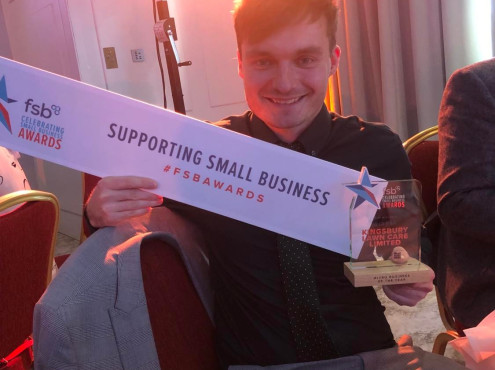 Sowing the seeds for success

While Jack confesses that he loves what he does so much it doesn't feel like a chore, there's definitely a lot of hard work paying off.

It all began with Jack mowing his lawn at home using a push lawnmower for a bit of pocket money. He enjoyed being outdoors and posted flyers around the village of Kingsbury to expand his operations. He soon had 20 customers, before he was even able to drive. He then went to Loughborough University to study Sport Management with a placement year in the middle.

A little frustrated at the time-consuming nature of applying for placement roles, Jack instead presented a 13-page business plan he already had on his laptop to start his own venture - and Kingsbury Lawn Care was born.

Twenty customers became 60, the degree was deferred for a year, and Jack studied for a Diploma in Turf Surface Management with the Grounds Maintenance Association so he could refocus the business on becoming lawn care specialists.

When it was time to return to university, Jack took on his first employees so he could keep building the business while studying. Since then, the business has continued to grow rapidly.

Jack said: "Last year started with the business running as a two-van operation, with part-time office help from my mum, Lisa, and finished with us running three vans as a team of four. We will need to recruit an additional lawn technician and a further vehicle within the next 12 months."

As well as growing and developing his own business, Jack also supports the wider lawn care industry. In 2015, he joined the UK Lawn Care Association which gave him his first insight into the professional lawn treatment market. In 2019, he became the association's youngest elected committee member.

Jack said: "The business has more than doubled in size over the past two years and we anticipate serving the needs of over 1000 domestic properties in the near future. Looking after your lawn isn't as expensive as people might think. It can be as little as £125 per year for the smallest lawns.

"Simply, I love what I do. The variety that being a small business owner brings is an enjoyable challenge that I thrive on. I feel lucky that I relish Monday mornings."

While admitting it took a lot of confidence taking on employees in his early to mid-20s, Jack is incredibly proud of the team he is building.

"It's not just about me anymore, I have three team members to look out for too. It's all well and good as a sole trader creating a living for yourself."

"However, it becomes really special when others are believing in your vision, and you manage to attract and retain, and train talented people. We're building our own little business family. The volume of 5-star reviews that we have achieved over the last two years in particular is no accident. It has to be a collective effort and I'm incredibly grateful to each individual team member and the magic touches they bring," Jack added.