by Dave Mears
in Schools & Colleges, Rugby, Cricket, and Multi-sports venues
on 24 Jul 2019

Pocklington School is an independent day and boarding school for boys and girls aged 3-18. Located in Pocklington, a pleasant, small market town able to boast the services of a Town Crier. David Mears visited the school recently and met Andrew Woodhall, Head Groundsman at this old established school situated at the foot of the Yorkshire Wolds in the East Riding of Yorkshire.

Andrew Woodhall is a "local lad; born and bred in the area" as he says. He initially worked on an arable farm and his career has been land based since. He is proud that he was able to drive a tractor at the age of twelve! The one thing that sticks in his mind however was: "I knew how to keep lines straight!" This came from ploughing, seeding and mowing.

He has carried this with him and ensures lines are dead straight out on the sports fields and cricket field at Pocklington School. Andrew has been at Pocklington School for just over twelve years now and thoroughly enjoys his job. He told me that originally he fancied being a mechanic working with all manner of land machinery. This is exemplified by the fact that he is an avid collector of vintage farm machinery and implements which started in his teenage years. He relished the outdoor life and being hands on.

He more or less fell into farming with help and guidance of Melbourne Smith, the family's farming neighbour and friend. Melbourne took an interest in young Andrew and his keenness for work and the outdoors. He offered Andrew work even from the age of twelve and, when he was ready for proper work, recommended Andrew to another farmer. "So, was Melbourne the one person who inspired you?" I asked. "Thinking about it, I guess he was," replied Andrew. "He steered me in the right direction as I grew up and kept a watchful eye over my progression as a young teenager. He trusted my abilities and that gave me confidence." 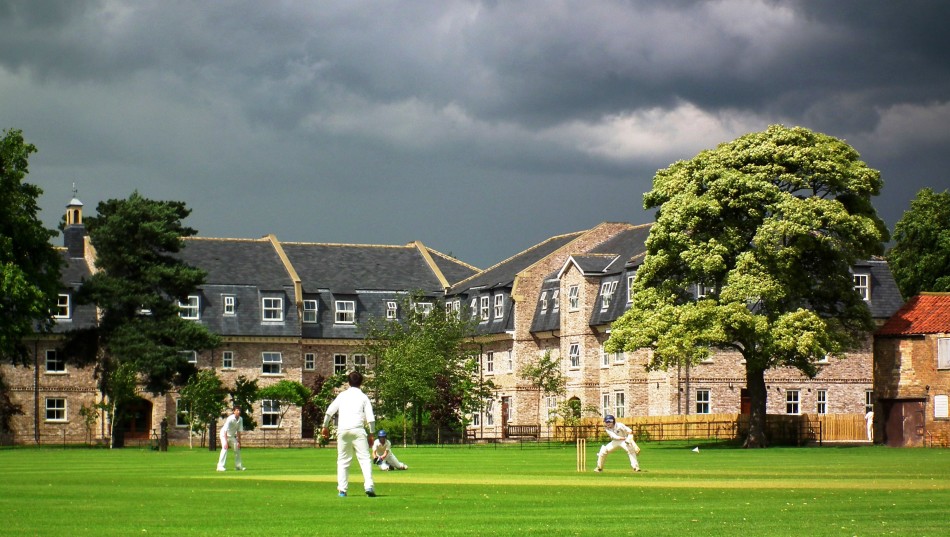 After fifteen years on the farm gaining vast and all-round experience, particularly with the operation and maintenance of machinery, Andrew felt a change was necessary. He joined the Royal Mail for two years, but missed the varied outdoor machinery life and wanted to return. He spotted an advert in the local press for the position of Groundsman at Pocklington School and applied. He thought himself fortunate to secure an interview and even more so to be offered the post in April 2007.

"Luck was on my side!" said Andrew. Perhaps it was more than luck? He had potential to progress and this was obviously spotted. The school backed this by funding courses at Askham Bryan College. An NVQ2 in Sports Turf Maintenance was undertaken and Andrew received his qualification. A while later he undertook an NVQ3, again at Askham Bryan. He has also attended other courses to assist in developing more knowledge and skills; these included a Land Based Team Leader course and a Cricket Pitch and Outfield course, operated and certificated by one of the nationally known member organisations, plus an Artificial Pitch Maintenance course.

Within a year of joining Pocklington School, Andrew was made Grounds Team Leader, effectively running the grounds department for the ensuing period and was provided with a house on site. In March 2014, he was officially appointed Head Groundsman, although he was responsible for budgeting and putting forward capital expenditure requests from 2009. He reports to Premises Manager Matthew Partis. 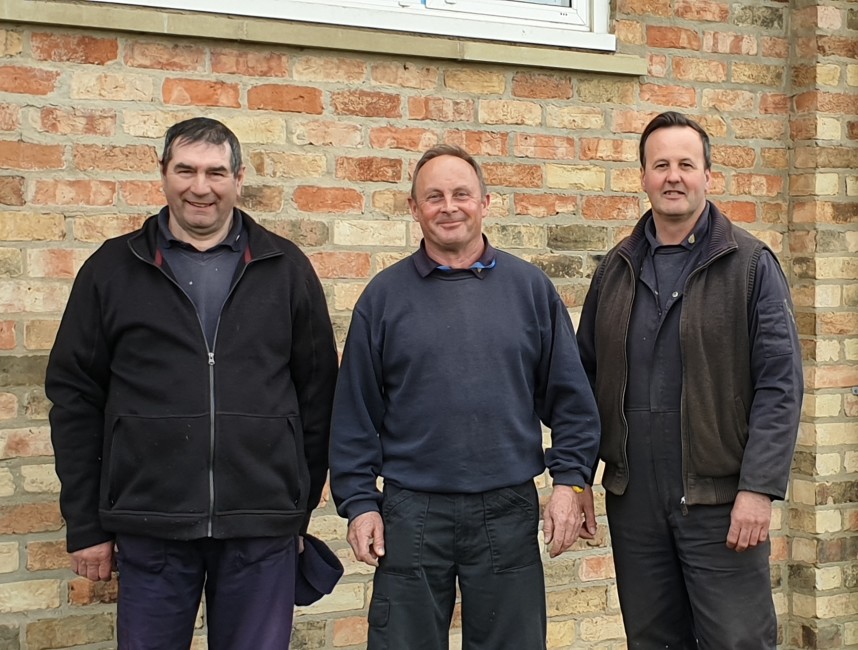 The facility and staff

Pocklington School was founded in 1514 by visionary and benefactor John Dolman, a lawyer and English clergyman who had a great understanding of the value of education. There are 771 students aged 3 - 18, with approximately 100 boarders. The school has a fifty acre campus, which includes twenty-four acres of outdoor sports facilities. These comprise twenty-one acres of sports turf (rugby, cricket, hockey, etc.) and three acres of Astro turf.

Andrew has two others on his team to maintain the sports grounds. The team, pictured here, comprises: Andrew Woodhall, Head Groundsman - worked at Pocklington School for twelve years and 46 years old; Paul Husband, Groundsman, five years at the school and 58 years old - came from a farming background, worked for InTurf of York (contracting work) and has a wealth of grounds experience; John Noble, Groundsman, thirteen years at the school and 65 years old. Also from a farming background and with a good combination of grounds and foundry experience. 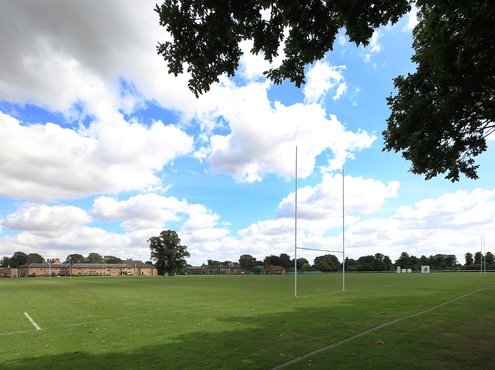 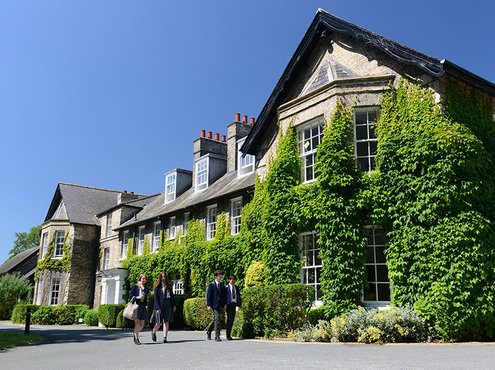 The grounds team encounter very few problems from natural occurrences, but high winds do dry out the cricket outfield and square at times. "The plants on the cricket pavilion take a battering on occasions!" says Andrew. He says that the sandy/loam soil profile prevents cracking. There are no real shading problems on the grounds but an early frost catches part of the Astro pitches where there is some shade from trees. This is soon gone as the sun rises!

"We each can carry out every task, but there are favourite jobs," says Andrew. "Presentation ranks highly as appearance is vital; and lines must be straight!" 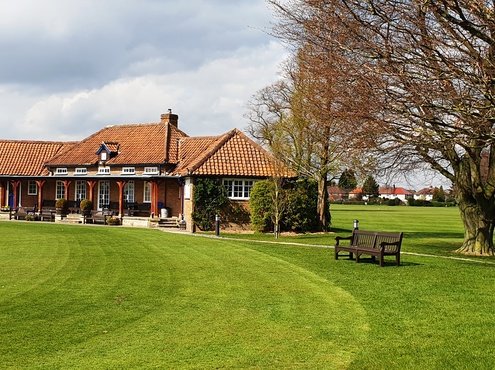 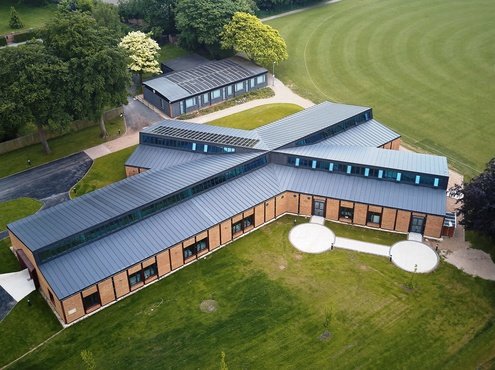 From the end of July each year, the cricket squares are renovated. Easter time sees major overseeding and topdressing. Andrew has to work within budget when carrying out renovations. Hockey Camp in August means preparations and all tennis nets removed. This is a regular event, so it can be planned well in advance. Rugby pitches need to be marked out to accommodate Rugby Camp each August too. Changing weather patterns meant delaying verti-draining last summer as it was so dry! "One thing seems to be sure," says Andrew about preparations, "it always rains when the school returns after Easter!"

The artificial pitches are brushed every week, weather and use permitting, and all are checked daily for debris and litter. Changing uses means new marking out of course. During the summer holidays each year, all artificial pitches receive a deep clean.

No major undertakings at present, but the rugby posts are to be refurbished and new fencing is to be installed around netball courts. Andrew does, however, want to construct a high jump pad and take-off "D". A recent project has been the reconstruction of the cricket practice nets to a curtain system and now have artificial surfaces. Rabbit nets have also been installed (see pests and diseases). Most work is carried out in-house. 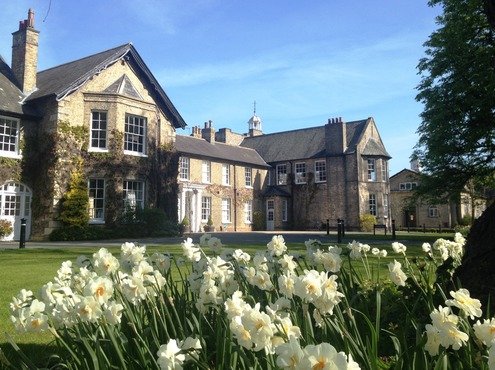 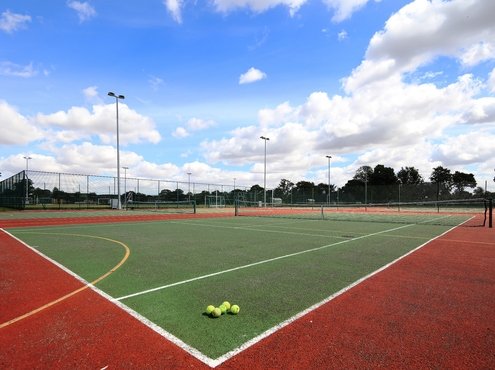 Pocklington School in spring / Anyone for tennis?

The school prides itself on ensuring that the team are all fully trained and compliant with legislative demands. Each has spraying and chainsaw certification and necessary PPE. Ongoing training is provided. The school does not currently employ an apprentice in the Grounds Department, but this is under consideration. As would be expected, the school employs a Health and Safety Officer with schoolwide responsibility.

There are four members of staff who are first aid trained and certificated. Also, in term time, there are school nurses available too.

Machinery (see 'What's in the shed?' below)

All machinery is purchased outright and, at present, with a ten year maximum replacement. Purchases usually will be through local dealers Russell's Groundcare, F G Adamson & Son or Cherry's in Frodingham. Andrew uses Market Weighton Mowers and C&W Mowers for the purchase of smaller pedestrian mowers, etc. Asked about loyalty, Andrew says: "I don't like all my eggs in one basket. We buy where we can obtain the best deal on the piece of kit we need."

The one piece of kit that has made a huge improvement has been the 4ft Poweroll 15 cricket roller. "A darn site better than the repainted Bomag road roller!" exclaims Andrew.

"It's not very often we need to hire in machinery," says Andrew. The department has the necessary kit and the team carry out basic regular maintenance, such as oil changes. Any other work is handled by one of the dealers mentioned above. 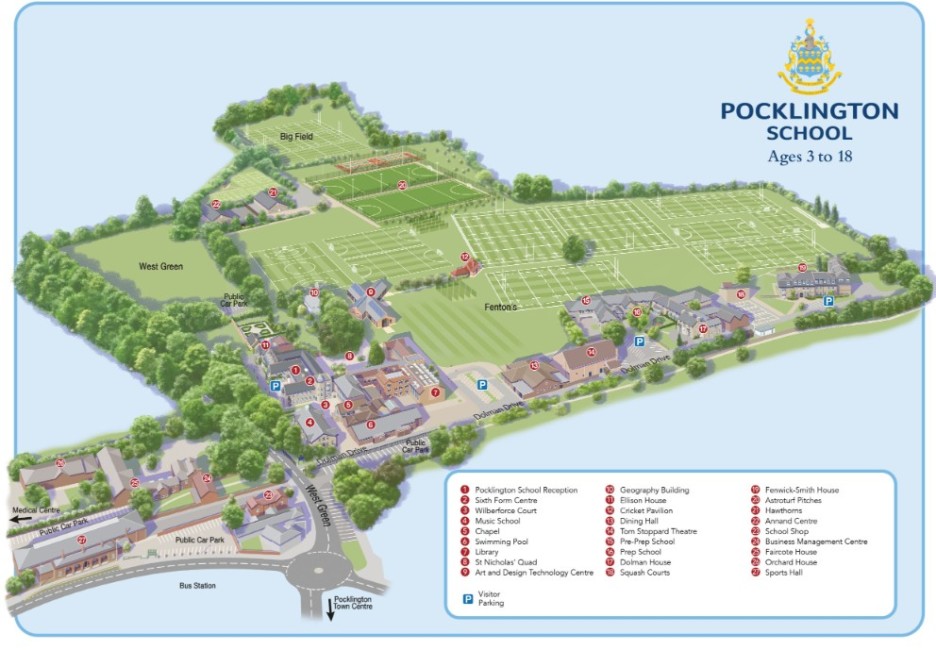 Very little spraying is necessary for weed control and most spraying is with liquid fertiliser. "We've had problems with rabbits," explains Andrew, "but, now that we have installed rabbit nets around the site, there are minimal problems."

Worms are an issue on the cricket square though. The team, therefore, have resorted to brushing. "I hope an alternative control method becomes available," commented Andrew.

Flora and fauna are of importance to the school and a field studies area was set up last summer to further encourage this. Pupil participation is high and encouraged. Bird boxes are in evidence around the site too.

The school has an environmental policy in place with recycling and waste reduction greatly encouraged.

Andrew is of the opinion that, in his experience, the groundsman side seems to lag behind that of golf, particularly in terms of awareness and pay. He also feels, as do many in the industry, that grounds maintenance workers are undervalued and so often taken for granted. That fabulous pitch did not happen by itself!

Raising the profile of the profession is important and, as Andrew says: "This is happening and being aided by magazines such as Pitchcare and others." He sees the work that the organisations connected with the industry as important too. They visit BTME most years to stay abreast of developments within the industry and attend dealer demo days, etc.

At Easter, the site is turned around from the winter pitches to the summer

Spot sprayed for weeds on the cricket squares and associated areas. However, some areas on certain pitches do need the team sprayer once/twice a year, but is kept to the minimum

Squares are cut/boxed off once a week

Wickets prepared on a daily basis

Surrounds cut once a week 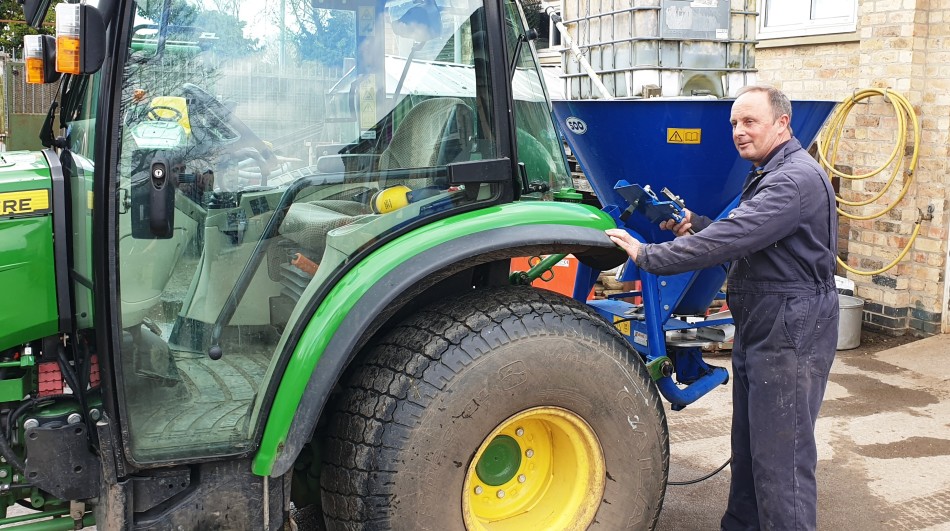 Any weeding done on a weekly basis around pavilion and associated areas etc.

Astros checked for debris every day and brushed three times a month during the summer, but brushed every week through the winter

During the summer holiday, the site is turned around to the winter pitches

Rugby, mini-football, grass hockey, netball, lacrosse and artificial hockey are all marked out

Cricket squares are renovated and applications of Greenmaster Pro-Lite Invigorator 4:0:8, along with Pervade, Vitalnova AminoBoost and BioStim HFT are applied in autumn/winter

Slitting of pitches is carried out on a weekly basis

The collection of leaves is carried out every day 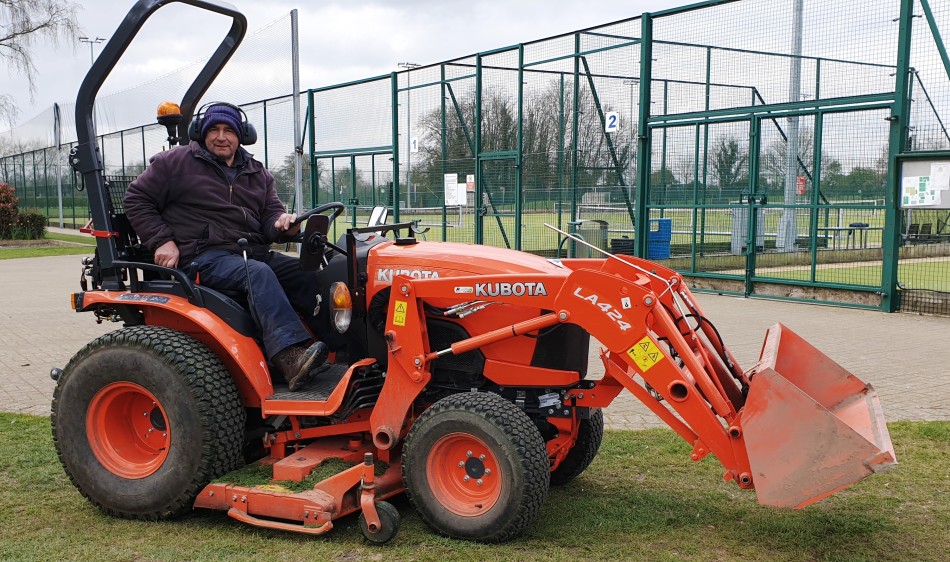 John Noble going back out 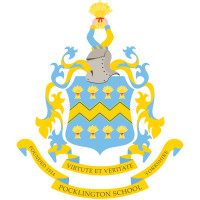