by Alan Spedding
in Conservation & Ecology
on 03 Nov 2014 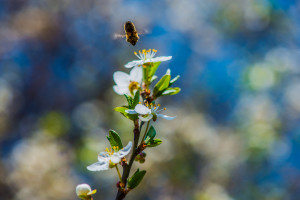 Insect pollinator numbers are affected by many different environmental and socio-economic factors, but attributing long term change in pollinator numbers to one or more of these is difficult. Scientists are beginning to understand how these different factors interact with each other, and which are more important for particular insect groups, but there is no single, simple explanation for pollinator decline says Alan Spedding of RuSource, the rural information network

Why are insect pollinators important?

Bees, flies, wasps, beetles, butterflies and moths are part of a nation's biodiversity and natural capital. They have intrinsic value and provide environmental and economic benefits because:

- Over three-quarters of wild flowering plant species in temperate regions need pollination by animals like insects to develop their fruits and seeds fully. This is important for the long-term survival of wild plant populations and provides food for birds and mammals

- Pollinators improve or stabilise the yield of three-quarters of all crop types globally; these pollinated crops represent around one third of global crop production by volume

- Many fruit, vegetable, oil, seed and nut crops that provide vital nutrients for human diets worldwide, including more than 90% of our vitamin C, are pollinated by insects. The cultivated area of pollinator-dependent crops has risen, raising worldwide demand for insect pollination services three-fold since the 1960s. Globally, the crop production attributable to insect pollination was valued at US $215 billion in 2005

- Honeybees, but also bumblebees and solitary bees, are managed and traded commercially for their pollination service. Wild pollinators are at least as important as managed pollinators in providing these benefits

What is happening to pollinators?

Pollinators are declining in Britain and in many regions of the world:

- In Britain, since the1950s, there is evidence of decreases in range (more species have reduced their ranges than increased) and number of species (more places have lost species than gained) of bumblebees, solitary bees, butterflies and moths. Hoverfly ranges and species numbers seem to have declined less. A recent analysis suggests that overall declines in the number of bumblebee species have slowed since the 1980s

- Structured, volunteer recording schemes provide strong evidence that population sizes of butterflies and moths in Britain are declining overall. The lack of a similar recording approach for wild bees and hoverflies makes it harder to know whether their population sizes are also declining

- In England, the number of managed honeybee hives fell by about 50% between 1985 and 2005. Since 2007, an upsurge in the popularity of beekeeping has increased the number of hives again but, every year, many honeybee colonies are lost

What are the main pressures on pollinators?

Many environmental changes can reduce pollinators' access to essential resources such as food, nest sites and overwintering sites, or directly affect pollinator health:

- Loss of wild habitats, changes in crops being grown, exposure to chemical pesticides, climate change, disease, changes to the plant community, and economic or cultural changes affecting keeping of honeybees can all contribute

- Loss of flower-rich habitats, such as hay meadows, rough grassland, woodland and hedgerows is often considered to be the main driver of changes in wild pollinator communities during the late 20th century. This particularly affects species with specialised ecological requirements

- Intensive farming, with simplified crop rotations in large fields, high herbicide and fertiliser use and high livestock densities, can have a negative impact on pollinators, due to the loss of flowers and nesting areas. Flowering crops, e.g. orchards, oilseed rape, do not compensate because they only provide transient nectar and pollen sources

- Insecticides have been shown to affect the health and behaviour of honeybee and bumblebee colonies in laboratory and small-scale outdoor experiments, even at levels that don't kill the bees. However, the actual levels of insecticide that pollinators encounter in the real environment are difficult to assess accurately

- Wild insects and plants are already changing their distributions on a large scale in response to climate change. This may disrupt pollination if important pollinators become desynchronised with the plants they pollinate

- Pests and pathogens dominate explanations of managed honeybee loss. Honeybees are afflicted by the varroa mite, many viruses, fungi and bacteria. Pathogens are also an important mortality factors for wild bees, and there is increasing evidence that they can spread from managed honeybee to wild bee populations

Can researchers identify a single cause of pollinator decline?

There is no single, overriding cause of decline in pollinating insects:

- The balance of pressures varies between different pollinator groups. For example, wild pollinators, especially butterflies and specialised bee species, are probably more affected by habitat loss and climate change. Managed honey bees are more affected by disease. Both groups are also threatened by loss of flowers and agricultural pesticides

- The relative power of the different pressures to change pollinator populations is not thoroughly known for any pollinator group. This is because most studies have been limited in the scope of species (e.g. honeybees or bumblebees) or combinations of pressures (e.g. pesticides and pathogens) that have been considered

- Nonetheless, it is likely that, in the real world, many of the different pressures combine or interact, leading to an increase in the overall threat to pollinators

What are the implications for decision makers?

- Creating or restoring flower-rich and semi-wild habitat will enhance pollinator abundance, health and diversity, and may also reduce the combined impacts of other threats (e.g. agri-chemicals, climate change and pathogens) on pollinators. We can achieve this by incentivising uptake by farmers of agri-environment schemes that support pollinators and more effective targeting of these schemes in the landscape

- Citizens can be encouraged to plant wild flowers to help pollinators. Publicly owned spaces (e.g. parks, road and rail corridors) can be adapted to provide pollinator habitat, perhaps by less intensive management, which could also save money

- Surveillance of beekeeping operations should continue to help reduce disease impacts on managed pollinators, but also be expanded to evaluate the risk of disease spread between managed and wild pollinator populations

- Standardised monitoring of wild bees and hoverflies is urgently needed, so we understand better whether their numbers are changing, how changes in pollinator populations are related to different environmental pressures or how changes affect pollination services across Britain

- Pesticide risk assessments need to take account of subtle (e.g. behavioural) effects on honeybees and other pollinator species (e.g. bumblebees and solitary bees), as these effects are probably interacting with environmental pressures to affect pollinators.

RuSource provides concise information on current farming and rural issues for rural professionals. They are produced by Alan Spedding in association with the Arthur Rank Centre, the national focus for the rural church.

RuSource is a voluntary project partly supported by donations and sponsorship.