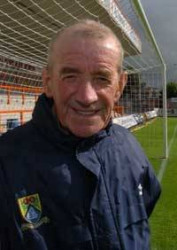 Morcambe Football Club lost one of its most popular and long-serving workers this week when Clarrie Hollings died, aged 78.
Clarrie was a regular face at Christie Park since his early childhood and for many years worked there as groundsman.

He officially retired from that position several years ago but still helped out at the ground until he became ill earlier this year.

Clarrie, a former gas-board employee, was a past recipient of The Visitor's 'Local Hero' award and was popular with Morecambe
players, officials and fans, receiving a standing ovation when presented to the crowd as a special guest for the club's last home game of its first season in the Football League.

Apart from his recent illness, Clarrie hardly had a day sick and was able to travel with the club's fans for the team's biggest ever occasion in the play-off final at Wembley - one of the best days of his life.

He kept fit by cycling and was often found tinkering with his bikes.
He also enjoyed his time as bingo caller at the former Morecambe FC auxiliary supporters' club.

Clarrie will be sadly missed by his wife, Carmen, and the rest of his family, as well as the generations of fans who got to know him in their own ways at Christie Park.

Clarrie's funeral is at Lancaster and Morecambe Crematorium this coming Monday, June 16, at 3.30pm.