As founder members of the Football League, Preston North End are one of those teams that you feel should be 'bigger'. In truth, much of this belief is from the club's early history when they became the first team to win the league and FA Cup double in 1888-89, and the 'Invincibles' won the league the following season without losing a game.

Since this early success, Preston North End FC has had a checkered history, ricocheting around the lower leagues for much of the time. However, in recent years, a succession of Scottish managers, the latest being Darren Ferguson, son of Sir Alex, has seen them reach the Championship play-offs on a number of occasions, sadly missing out on promotion to the Premiership each time.

The suffix, North End, comes simply from the fact that their Deepdale stadium is in the north end of the town. It is the oldest continuously used football venue in the world and, at the end of this season, will have notched up an impressive 135 years.

Until May of this year, and in recognition of the club's history, Preston was the home of the National Football Museum. Sadly, it is now permanently closed after agreement on funding could not be reached between Lancashire County Council and the museum's trustees. However, plans are afoot to move the exhibits to the Urbis Exhibition Centre in Manchester, although the FA would like to see it relocated to Wembley!

Since 1995, the stadium has undergone a complete facelift, with all seater structures now on all four sides of the pitch. Three are named after famous sons, Tom Finney, Bill Shankley and Alan Kelly, whilst the most recently completed is the Invincibles stand. The stadium's capacity is 23,408, although extensions can be added by removing the roof on three stands to put up extra tiers. If this were done the capacity would be c50,000, a touch of forward thinking as the club strive to reach the Premiership.

Head Groundsman is Peter Ashworth, who has been in the post for five years, taking over from Richard Eastham who moved on to Liverpool. Peter previously worked at Oldham Athletic and also Blackburn Rovers, where he worked for eight years as Steve Patrick's assistant. He undertook an HND in Turf Science at Myerscough College.

Peter has three permanent staff; Dean Ash, his assistant at the stadium, and Peter McCallum and Sam Newton who share their time between the stadium and the training ground. Peter has also acquired the help of David Wall, another graduate of Myerscough, who is on voluntary work experience until he can find a job in the industry.

Peter also enlists the services of Mike Harbridge and Gary Owen of PSD to advise on agronomy matters.

The Deepdale stadium is fairly open by modern standards, with the corners allowing plenty of light and air in. However, during the winter months, the low sun casts shadows onto the pitch right up to the northern end's penalty spot for most of the day, resulting in temperatures being two or three degrees lower than outside, which prolongs frosts.

In 1986, the club laid an all weather pitch in an effort to generate extra income by renting it out to local teams, to reduce the number of postponed matches and to be able to use it for training. It proved unpopular with both players and fans, and was ripped up in 1994 and replaced with the current grass pitch. 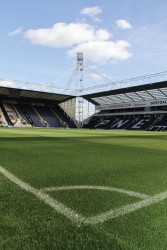 The reinforced system has been at Deepdale for several seasons now and works very well, and has contributed greatly to reducing the amount of divots and repair works required after games. However, these systems require extensive renovation works each year to redistribute the fibres and remove any build up of organic matter in the surface profile.

As with most modern sand-based pitches, end of season renovations are centred around heavily scarifying the pitch with a Koro field topmaker to remove unwanted vegetation.

This year, Peter's renovations did not begin until May 24th, as there were four weeks of local cup games and corporate matches to accommodate. This left just seven weeks to get the pitch back to a playable state.

The pitch was fraise mown, taking off 12mm of vegetation, power harrowed to a depth of 85mm, incorporating 360 tonnes of new Mansfield sand, 350kg of Scotts 15:5:18 Sierrablen Plus, 100kg of Scotts Step Hi mag and 5000kg of profile into the pitch. It was then stone raked, rolled and seeded with Johnsons Premier grass seed. The pitch was also fed with a pre-seed fertiliser NPK 6:9:6. Peter also used a biostimulant during the first few weeks of growth to help root development

Once the seed had germinated, the pitch was mown using pedestrian rotaries, gradually reducing the height of cut to around 30-32mm, after which Peter and Dean used the Dennis G860s.

Scotts 12:0:12 NPK blend of fertiliser is applied on a monthly basis throughout the growing season, which is complemented with a Scotts slow release 25:5:13 +2% MgO every twelve weeks. Autumn/winter feeds are 7:0:14 and 4:0:8 invigorator on an as and when needed basis during the winter months.

Sward height is maintained at 23mm throughout the summer, 25mm during the beginning of the season (August-November) and 27mm in the winter months. A Jacobsen Triple mower and a pair of Dennis G860s, with interchangeable cassettes, are used on the pitch.

Maintenance of the pitch is designed around keeping the reinforced system open, preventing it from locking up and becoming consolidated. This is achieved by regular aeration to a minimum depth of 100mm, generally every month or after three games.

Weeds are controlled by hand weeding, reducing the need to use chemicals. Outbreaks of red thread or fusarium are rare but leaf spot, which starts to show in June with further outbreaks appearing July and September, are an issue and appear to coincide with applications of fertilisers.

Weekly activity leading up to matches is fairly consistent, but may change depending on the weather forecasts. Clean-up work begins immediately after a game, repairing divots and scars in the playing surface. This continues on the following day for a couple of hours until all the divots are replaced. Then, the pitch is lightly scarified (at height of cut) to clean out any debris, followed by rotary mowing to clean up the pitch.

Cylinder mowing is carried out on a daily basis. Grass clippings can no longer be dumped or composted on site, as new regulations dictate that the clippings are emptied into a designated waste container and disposed of in sealed containers to the council tip.

To facilitate this process, Peter has designed his own grass clipping collector that consists of a metal hopper with a bagging system attached. It was built by a local fabricator.

String lines are used to ensure both mowing bands and line markings are true and straight. Peter likes to mow and mark out on the day of the match. Three staff come in early (around 7.30am) and begin the task of mowing (two directions), marking, watering and setting up portable goals. Lines are marked out using a transfer wheel linemarker, using Vitax super stadium paint.

This work is usually completed by 12.30pm, which is when watering starts, setting the fifteen sprinklers to come on for three minutes each. The cycle is completed by 2.00pm, ready for the players warm ups between 2.00-2.45pm. A final watering is undertaken using the three infield sprinkler heads, which finish their cycle by 2.55pm - five minutes before kick off. Practice goals are taken down during this period.

At half time the groundstaff will divot the pitch and re-water the centre of the pitch ready for the second half.

The training ground is situated a few miles from the stadium at the old Nuclear Fuels Industry Sports Ground, which was built on a old floodplain, so the ground is flat and fertile. There are four senior pitches at the training ground, all are natural soil based.

Like many clubs, the training grounds are now the primary focus for the development of players. The club run a strong youth and academy programme that operates seven days a week.

So, there is always plenty of work to do at the training ground. A fully automated pop up watering system and bypass drainage schemes, to improve the condition of three of the four pitches, has recently been installed. Primary drains were put in at five metre centres and overlaid with lateral sand bands at 0.75m centres.

This year's end of season renovations saw the pitches fraise mown (taking off 12mm of vegetation) and topdressed with forty tonnes of sand. Two pitches were overseeded with Johnsons Premier Pitch mix and one with Rigby Taylor's R14.

Peter enlists the help of Derek Crane, a local sports turf contractor who specialises in renovation work. The company also undertake other works, which includes cutting all the hedges around the site.

Two new conditioning training aids - a running slope and sand pit - have been installed. The sand pit is used for strength training and rehabilitation of injured players. The sand is a special 300mm deep washed sand, which is covered to keep it clean and free of contamination.

Peter hopes that, in time, one of the pitches will be built to the same specification as the stadium pitch, a route that many clubs are taking, but understands that investment in football clubs these days is a precarious business.

He is lucky to work for a club that is prepared to listen and support his needs whenever they can. Football pitch maintenance is an ongoing challenge, especially when players expect top quality pitches all year round. It would seem that Preston North End are going in the right direction, both on and off the pitch. The dream of playing in the Premiership may soon be realised.