Employees from Maxwell Amenity were happy to share expertise and resources and work with teachers and volunteers from High Ercall Primary School to produce a wildlife habitat learning area for pupils to enjoy. 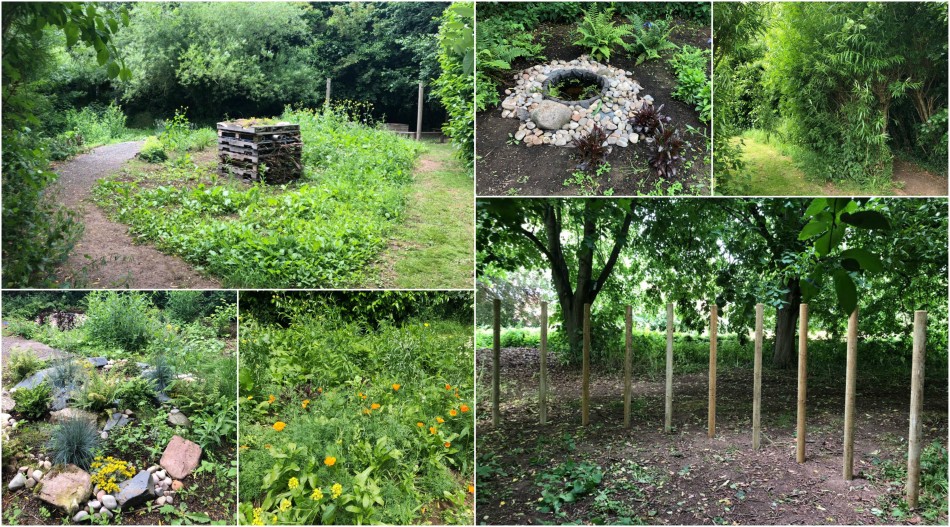 Based in Telford for over 30 years as ALS, the company has grown significantly to be part of Maxwell Amenity, employing a total of eighty staff. A key ethos of the company is to use expertise and work with local communities.

Staff are encouraged to put forward suggestions of community projects for the company to get involved with. A staff social committee considers and investigates the feasibility of any suggested project and then get involved in undertaking the work, with the company providing products and expertise to the beneficiary.

High Ercall Primary School were identified as they needed the support from a company with landscaping expertise to look at best use of the area, including how they could maximise the wildlife appeal in the area. The project was too big for them to undertake on their own and they didn't have the budget themselves to make any substantial changes but were keen to contribute to the project with their own staff and parents.

Paul Robinson (Landscape & Amenity Director), John Handley (Technical Manager) and John Richards (Operations Director) met with High Ercall Head Teacher Mrs Roberts, to have a quick tour of the existing site and to discuss potential ideas. Initially it was requested that the existing box pond was dismantled and drained, as this was not fit for purpose, and that the current degree of weeds and undergrowth be removed.

The ALS Contracts team went in a few months prior to the first volunteering day, to spray total weed killer over the existing established weeds and the extensive undergrowth. This was to enable the team to quickly and easily clear the dead growth and be able to start afresh with the new designs.

Thoroughly removing the existing weeds was also an important factor for reducing the required upkeep that the school would have to undertake once everything had established. They would only have to keep on top of managing the emergence of new weeds moving forward.

Before the project commenced

Dr Julia Lock, Technical Manager at the time of this project, organised the designs for the wildlife area, which she details; "It was a pleasure to contribute to the improvement of the forest school at High Ercall. The site to begin with was ideal, with its shrub layer forming a perimeter to an open area composed of a storytelling circle and fire pit. The area was backed by a stand of trees which led to an long open corridor bordered by more trees."

"The key objective was to add ecological value and bring in some species and features of the surrounding area. This led to the creation of several points of interest which included: stakes driven into the ground for the school children to weave willow between, in order to construct a bird hide, and a range of bird houses and feeding stations, to encourage a diversity of bird species; extra seating around a fire pit to cater for everyone; a frame of pallets with a sedum green roof, ready for the children to pack with materials, so that insects can take advantage of it as a bug hotel; a herb circle with local stones, ferns, and fescues to celebrate the geological wonder that is the Wrekin; and a pond to encourage insects and amphibians alike."

The creation of these areas will hopefully fulfil the niche requirements of specialist species as well as catering for generalists. In addition to this, we were successful in securing a fruiting hedgerow tree pack from the Woodland Trust.

"It is important to teach children with real life experiences so that they can see the interactions of floral and faunal species, and also how having a diverse array of habitats can provide a service to species which have overlapping needs."

We gathered a total of 11 staff volunteers over the three days, accompanied by volunteers from the school, to get their hands dirty and help out in any way they could. The first day was held on Saturday 17th March, which mainly entailed clearing the vast amounts of sprayed off dead weeds, removing built up debris and trimming back some of the low lying branches.

It was extremely messy work, especially for John who had the task of draining an old boggy area! Even the snow didn't slow us down though, and we managed to wipe the slate clean ready for the second day of intended planting. We also used pallets from our HQ to create two bug hotels filled with recyclable materials such as bricks, tiles, tubing and wood scraps; perfect for housing insects and small creatures. To finish off for the day we levelled the cleared areas and topped off with ALS's Mycorrmax compost soil, putting a great base down for subsequent planting. 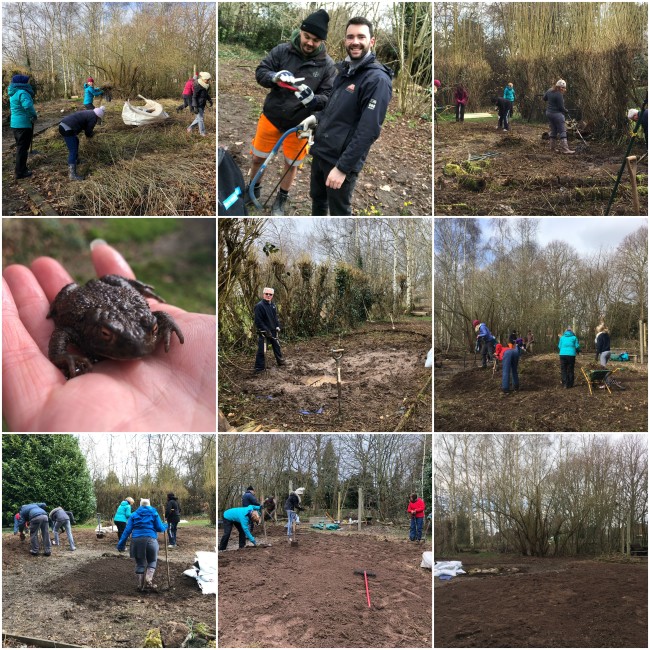 The second day came on the following Saturday, the 23rd March. Here we were able to get creative and start the planting process. Placing in groups of three, we planted phlox, blue fescue grasses, cardinal flowers and sedums around the bug hotels in the two main cleared areas. These were then interspersed with wildflower seeds, kindly donated by Matt Gresty from Limagrain. In the centre of these two areas we built up a stone spiral using materials found at the school site as well as rocks and cobbles sourced locally.

The gaps were then filled with sedums, ferns, phlox, blue fescue and Alchemilla. We used a small half-barrel, dug into the drained swamp area, and built up around it with earth and cobbles, to make a small pond. This was lined and then backed with cardinal flowers and ferns, to create an excellent little aquatic environment for a variety of amphibians and other local animals. In addition to this, large logs were donated by one of the school's volunteers to enable the team to expand the existing fire pit section, allowing for more children to sit safely in this area.

After a respite period of two and a half months, the volunteers reconvened on the afternoon of Friday the 8th June to tidy up any growth and apply the finishing touches. The wild areas surrounding the big hotels and the planting were weeded, the Vivara Pro bird and bat boxes were put up in the trees and the bird feeders hung. The main task of the afternoon however, was to create the structure of the bird hide.

The aim was to provide an area of quiet where the row of established trees containing our bird and bat boxes could be observed, without disruption to the fauna. We inserted ten 1.8 m x 75 mm wooden rounded stakes, approximately half a metre apart in a slight curve, facing the row of trees to be viewed.

As part of the integration with the school's lesson plan to involve the children in their own wildlife area, these stakes will then be woven with lengths of willow. Allowing for viewing portals at differing heights, the children can have a designated place to view the wildlife, whilst giving the birds a buffer space.

Commenting on the three days of volunteer work, Mrs Roberts said, "It was great to see such teamwork involved in this positive experience. There was a good mix of staff from ALS and our own, working with a common goal of supporting our children and improving the area. Whilst it was a lot of hard work, even during a bit of snow on the first day, all mentioned how satisfying it was to be gardening and working together." 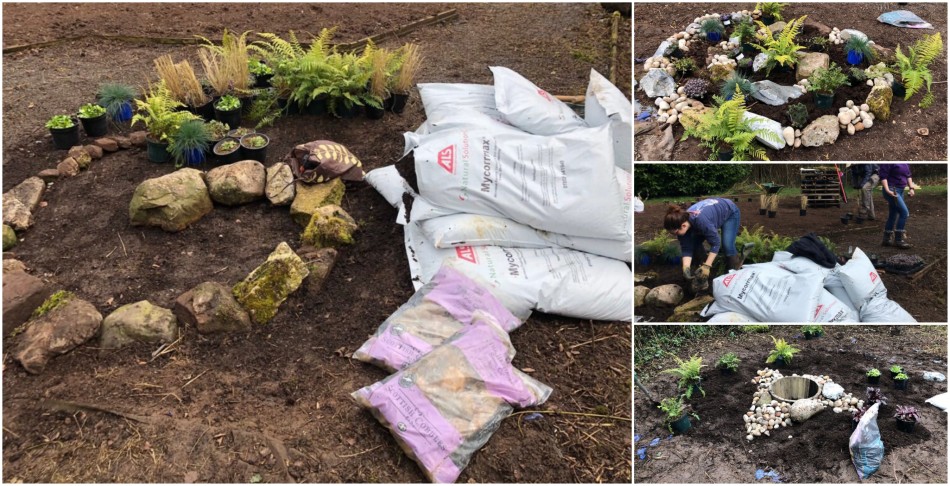 Whilst there will be the ongoing need for site weeding and general maintenance of the bird feeding stations, the project was completed and handed back to the school for use.

With completion of the project, John Richards commented; "We are very pleased with the outcome. I expect the Forest School to provide the children with many years of fun and learning. We are delighted to be able to use our expertise to help the school in this way".

Mrs Roberts concluded; "We are excited about the superb new whole class area around the fire pit for all to use. The new pond area is attractive and This should encourage additional wildlife as it is more natural than the previous pond. The space is opened up with lovely planting, the bug hotels and bird / bat boxes will encourage wildlife and be a great resource for learning for all the children.

The bird hide will be a great teaching tool - there are lots of lovely birds in the area and this will encourage the children to find out more about them and watch them undisturbed (hopefully!). Overall a much more environmentally friendly area, attractive and open which will support learning in many areas for all classes." For more information on community projects such as this, please contact sian.workman@maxwellamenity.co.uk