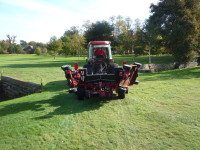 It is on the site of what was England's largest Cistercian Abbey, founded by Edward I, who in 1277 laid the first foundation stone. In the 16th century, the Abbey was pulled down and replaced with the Great House, now an impressive Clubhouse. It is reputed to be haunted, and among the protected sites in the grounds is a Nun's grave.

The present owners purchased the Club in 2001 with what remains an ongoing commitment to operate as a traditional Members' club, although it has recently been opened up to visitors and societies, while the Great House is a popular venue for weddings and functions.

Course Manager Jonathan Betts has been at Vale Royal Abbey for six years and leads a team of six greenkeepers; previously he was Deputy Course Manager at Delamere Forest Golf Club.

Constructed with USGA spec greens, the course also has extensive areas of rough, which can take three days to cut. Course manager Jonathan explains: "We decided to look for a new mower a year ago, as our previous machine was struggling to cover the ground, and as a consequence of wear to the bearings, was beginning to cut unevenly."

After looking at a range of machines on the market, Jonathan came across the Progressive Pro-Flex 120. "This mower really appealed because of its robust build quality. I'm well aware that we expect a lot from our mowers - the course was farmland before, so nitrogen levels are high and there is a lot of growth. We can be cutting 20/ha a week, and although we aim to mow once a week, rapid regrowth or the need for high presentation standards during a competition can make it more often." Reliability was another priority, as the previous mower had spent a lot of time in the workshop, and the 3/16in deck and heavy duty frame on the Pro-Flex 120 have certainly delivered, says Jonathan.

"The course is undulating in parts, and the five individual mower decks follow the ground contours well, with no scalping," he points out. "Plus the cut quality is excellent, very even with no clumping even in heavy growth."

An acknowledged benefit of rotary mowers is their ability to cut in wet, and Jonathan confirms that the Pro-Flex 120 has been out in all weathers. "With its 3m working width, it is also very quick, which helps with our workload," he says.

"Another good feature is the folding outer decks, which reduce the transport width. It means that the greenkeeper can choose the most convenient route along the paths to the mowing job, even if they are restricted in width."

The mower is pulled by a 50hp Kubota L5030, which Jonathan says is 'more than adequate' and a 32hp Ford 1920 has even filled in for mowing duty when required.

"We've just finished our winter servicing, and costs were very low - it even looks as if the blades will last another season," Jonathon comments.

Supplied by Turner Groundcare of Chester, the mower was demonstrated and installed by Lee Ashcroft from The Grass Group.

"Lee showed us around the mower and set it up, which was very straightforward. All of our greenkeepers can use it, which is a bonus when you are busy. I would expect the mower to last at least five years as it is so robust and reliable."