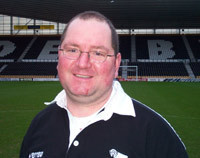 Before joining Derby I was the assistant at Sheffield Wednesday. A friend of mine told me about the new stadium being built so, when the position was advertised, I applied for the job. I was interviewed by the Manager and Secretary and offered the position.

I'd been at Sheffield since 1984, and I had a good tutor, Mr Barber. A lot of things I learnt then have stayed with me and just been modernised. In those days it was mainly compaction problems with the weight of the machinery. We had 36" Allett Regals weighing 360kgs. Today's mowers are a lot lighter.

Mallinsons had undertaken the construction of the Pride Park pitch, it had been seeded in May 1997, so by the time I started, it was quite well established. The main problem was physically getting to the pitch because the stadium was still a building site. We had to carry the mowers from the car park to the grass over concrete. It was impossible to roll them because of the rubble. Cutting the pitch in 80 degrees, wearing a hard hat, boots and high visibility vest was great fun. I asked the Site manager why I had to wear the hard hat in the middle of the pitch. Being 60 metres away, if anything hit me it would kill me anyway. The manager said if that happened when I was wearing a hard hat at least my wife would get some compensation!

The stadium pitch is a fibre sand construction, the top 100mm is fibre rootzone from Mansfield Sand, then a medium sand on a stone carpet, and it drains absolutely fantastic. There is undersoil heating at a depth of 250mm and 300mm apart. We prefer to use it as little as possible, but if it means getting a game on we use it. We've had it on less this year because I haven't had to think of training at the main ground. We've got a new training centre. I've got frost sheets down there so the team don't have to come up here as often for training. The benefit of the fibresand is not having massive divots. Sometimes, the players complain about the firmness but the alternative is going back to a soil pitch and having big divots affecting the roll of the ball.

We aerate the pitch regularly, with needle tines at least once every 3/4 weeks, with a normal spiking every couple of weeks or so, using something like a SISIS MT4 just to get some holes in. We verti-drain every 4 or 5 months to gain that extra depth. With the rootzone only being 100mm we don't need to go too deep otherwise it will disturb the sand beneath. As long as we are getting through that top 100mm I don't think we'll have any problems about creating a pan underneath.

Normally we don't have any problems at all with drainage, but there was the one match in December when we had that abnormal weather - a band of rain across our part of the Midlands on the morning and lunchtime before the game. I was struggling to get hold of a forecaster. I couldn't get an update, so I took one off the Met Office site which was a weather warning for the next 6 hours. An early decision had to be taken to prevent visiting supporters travelling from Sheffield unnecessarily so the referee decided it would be wise to call it off at 12.45pm. It stopped raining at 1.30pm and, to be honest, we could have had the pitch playable for 3.00pm. It's the first one I've lost here. I felt very low that weekend I must admit.

However, I was pleased that we won the rearranged game, although we had a few weather warnings before that one as well. I thought the game was fated. We knew the week before that it was going to be cold with snow, minus 10 degrees with blizzards. We put the undersoil heating on about 5 days before the game and we kept in touch with the weather service forecaster arranged through Pitchcare. I spoke with the forecaster 6 times in the lead up to the game so I knew exactly what was happening. We spoke to the Club Secretary and the Safety Officer and gave them precise information on what the weather was doing. We knew what was happening and planned for it. The pitch was never in doubt, the heating had been on, there was a light covering of snow that we could easily brush off with the tractor in half an hour. We brushed the pitch two ways and it was perfect. The main issue was stadium safety. We had already put down rock salt outside the stadium and the inside lower tier on the Monday and Tuesday, but then we had rain before the band of snow which washed away the rock salt. From 4.00pm onwards on the day we had the gritter putting down rock salt outside the stadium and 20 or so people doing the same inside. 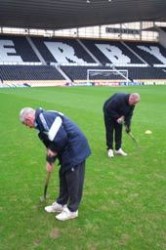 The referee arrived from Surrey about lunchtime, everything was fine. I was able to give him accurate information on the weather forecast. The road conditions were ok between Derby and Sheffield so we went ahead. There were no detrimental comments from the managers or players about the pitch. After this game it recovered very well. With the fibresand, nothing goes too deep, it's all scuff and scratch marks really.

I've just taken some samples to check with Mansfield Sand to make sure the fibres haven't diluted or moved around. I am hoping to take the top off this year and put some more fibre back in. Nothing new has been put in since the pitch was constructed seven years ago. Obviously, a lot depends on what division we are in because that affects the budget. I am confident we will still be in this division and, to be fair, the club have always been very supportive of doing any work I recommend.

Our normal weekly maintenance at this time of the year revolves around the matches. At one time I used to be a stickler for divotting immediately after the game but, with the way the pitch is, we tend to put the brush on which stands the grass up and levels the areas where it's a bit thin. We roll it using the Allett Buffalo and then sometimes water the pitch to let it freshen for a day. That sorts out a lot of the scuff marks. We probably spend 3 days on and off, divotting. We put the mower on again a couple of days before the game. And, that's all we use. We avoid using tractor mounted machines on the pitch.

My philosophy is to make the best of what you've got. We all have different problems, shade etc. We get as much spiking and tining done even through the summer to get as much root depth as possible. We have never had strong rooting here, at best 100mm-125mm over the far side in the sun. There is very shallow rooting on this west side but, because of the fibre, it holds together reasonably well.

The stadium here is very dark because of the seating, but it's a problem we have to make do with. At the time of construction they did consider translucent sheeting in the roof, but it was going to cost £250,000 for one end. I'd also been told that within six months you lose 50% of the benefit because of grime, and there's problems with keeping it clean. So I said as long as there was money to take the top off the pitch every 4 or 5 years I would be happy. There's always going to be black layer and thatch and, as long as it can be cleaned off every 4 or 5 years, that £250,000 will last most of my lifetime.