The pitches on the field are used every day throughout the school year and are home to two local football teams at the weekends, consisting of two adult teams and one junior section.

In the two years before the work, the pitches began to hold water during the winter months, preventing students using them regularly and causing fixtures to be called off.

Having recognised the issue, the school, through director of business and finance, Paul Atkinson, enlisted Professional Sportsturf Design (PSD) to carry out an initial survey of the site.

Paul explained: "There was an existing drainage system that had been installed several years ago, but it was no longer doing the job, and as a result, the pitches started to become unplayable in the winter. That then began to affect our students who couldn't use them regularly and our income at the weekends because the fixtures would be called off. 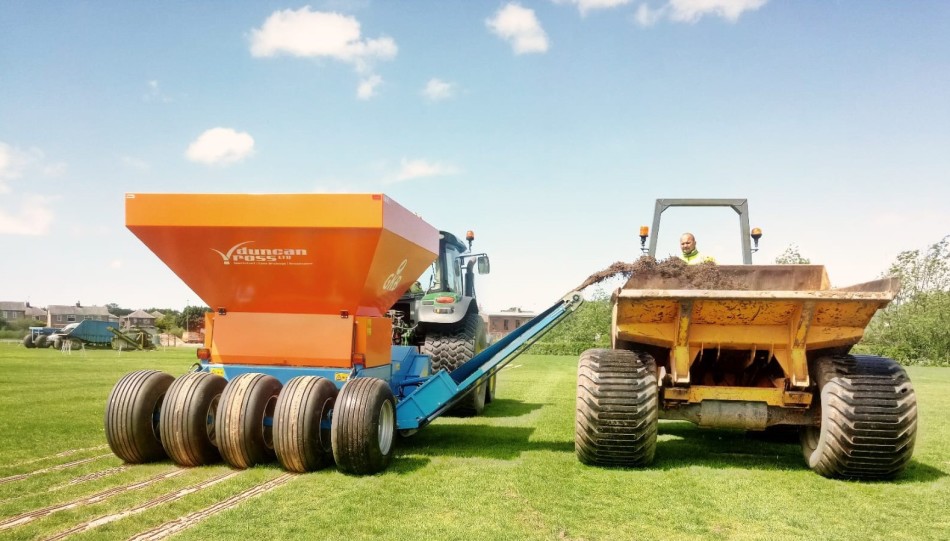 "Working with Duncan Ross has been very smooth. They stuck to the programme of works and kept us informed with what was going on. They worked well with our groundsman, and he was also kept informed about everything. He's very happy, and he'll start to mark the pitches out in the next couple of weeks, and he's very confident that we'll be playing on them in September. We're looking forward to using the pitches all year round, especially throughout the winter months."

The initial survey was done by PSD project manager, Mark Higgs, who recognised the need to install new pipe drainage to replace the older pipes that had become capped off over time. Secondary slit drains were also installed to make the pitches better equipped to deal with downpours and ensure water drained efficiently from the surface.

As well as the drainage work on the entire field, particular attention was paid to Pitch 1, the main match pitch, which had a layer of thatch. This pitch was fraise mowed with the Koro Field Topmaker to remove 85-90% of the existing vegetation before the pipe and slit drains were installed and the surface seeded.

Mark has now worked with Duncan Ross Ltd on a number of projects and commends Duncan's ability to think on his feet and offer quick solutions when issues arise.

He said: "Duncan went to the site prior to the drainage installation and he had to dig down and prove some of the existing drainage. He phoned me straight away to tell me he'd found something that meant we had to adjust our specification slightly. What's good when you're dealing with Duncan is that he'll improvise, he doesn't just phone you up and say 'that won't work', he'll say 'I've found this, it isn't ideal, but I've thought about it, and this is how I think we can achieve the finish on the job'. That proactive approach makes the process a lot quicker and reduces any downtime, which means we're able to meet our deadlines."