Queensway Stadium is home to north Wales' only paid rugby league team. The multi-sport venue is operated by Freedom Leisure and is run on a tight budget. But the place looks good, and its existence ensures that a part of the country which has a taste for the game still gets to see the sport played at a professional level.

Freedom Leisure is the trading name of not-for-profit Wealden Leisure Ltd, which owns seventy-five sites across England and Wales. Each year, the profits it would make are re-invested into the company's properties and, in the past financial term, that has represented £6.3 million.

They test themselves with a programme called 'Quest' established by the National Benchmarking Service, which is commonly used by public facilities in the sport and leisure industry. Two of their sites hold 'Stretch' (the top rating) status, which is held by only fourteen organisations nationally.

They are the UK's third largest leisure provider, and their stated objectives include: providing affordable leisure and sport; being life enhancing; and retaining the best staff by being fun to work for.

The stadium is owned by Wrexham Council, but has been managed by Freedom Leisure since March 2016, so that it can apply for grants and be run more efficiently. Freedom operate it as a trust on behalf of the council.

North Wales Crusaders are an ex-Championship rugby league side, now playing in the Kingstone Press League 1. Their ticket tally is respectable for a third-tier team not based in the heartland of the sport. It tends to hover around the 250-350 mark for league games.

And they are not the first rugby league club to be based out of the Queensway. The Super League club first known as Celtic Crusaders and later Crusaders Rugby League, similar-sounding but wholly separate to NWC, trained there between 2010-2011.

It has also been the training ground to large international sporting organisations: it housed the Lesotho athletics team in the lead-up to the London 2012 Summer Olympics, and was also a training venue on occasion for the Welsh and American national rugby league squads.

NWC are a multi-trophy-winning side, including the League 1 trophy, the iPro Sport cup and the Northern Rail bowl.

They are now led by Mike Grady and, like the other clubs in their league, have had to adjust to playing in a multinational competition since the inception of Toronto Wolfpack.

Under the head coaching of Mike Grady, they have a recently reduced player budget, but this did not reflect in their league position this season.

They placed a commendable 9th out of 16, level on points with 7th and 8th, and came third in the 'Shield', League 1's bottom-half post-season competition under the contrivedly complex 'Super 8s' system. 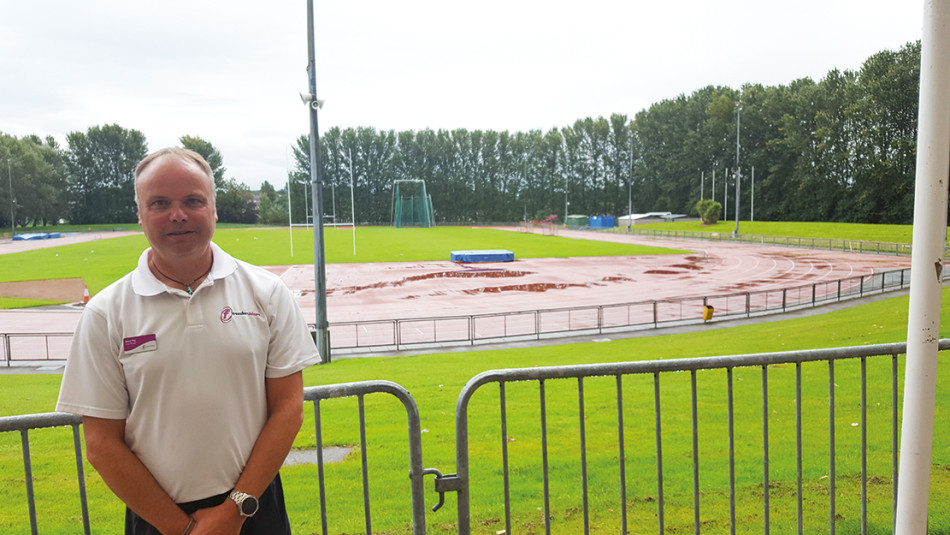 In charge of proceedings at Queensway is Steven Pay, 51, who described himself as "the Duty Manager with responsibility for grounds".

He went on to say: "I started this job thirty-five years ago as an apprentice with the local authority."

"Back then, there was a full-time groundsman and a grounds apprentice based here. You can see the way it's diversified... now there's just me, not being involved in the turf full-time. I'm looking after the grounds, but obviously I've got other roles to perform during the rest of the week."

Steven got into the job originally because he had a love of gardening. He went to the Welsh College of Horticulture, who were offering apprenticeships. He beat competition from 123 people for his place, which was one of just two.

"That gave me the same qualifications I would have got, but also gained me the experience and I got a good, paying job at the end of it."

"I really thought it was the right way to go, so I did three years' day release at Northop College. I've also done a few day courses, but most of my knowledge was picked up during the apprenticeship."

"The Northop course was a City & Guilds Level 1 in Horticulture, which took one year, and I followed that up with the equivalent Level 2 course, which took two years."

He recalled the TV personality Percy Thrower, and said that if anyone was responsible for the ignition of his love of gardening, it was him.

For younger readers: Percy Thrower was a BBC personality sometimes described as the first celebrity gardener and famous partly for gardening on Blue Peter, who spent most of his career as Superintendent of Shrewsbury's Quarry Park. 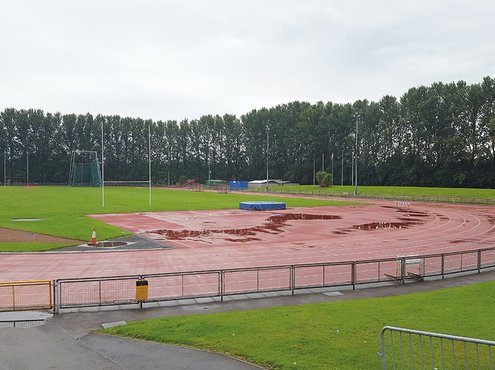 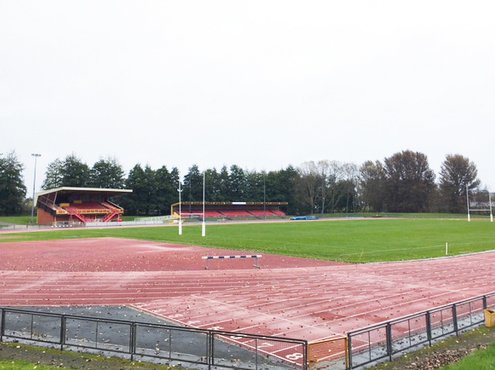 During the apprenticeship, Queensway was the first posting to which Steven was assigned, and he took an unexpectedly strong liking to their grounds.

Since then, the shrub beds have been removed from the grounds due to the decrease in the man-hours available, but Steven is appreciative of the fact he is still able to maintain the pitch and surrounding grassed areas.

He describes the budgeting as 'very tight'. They tend to do what they can with the equipment they already own, but a budget is submitted.

Being under a trust, proceeds tend to be prioritised to community involvement, subscription subsidies and other charitable endeavours.

But, when money is available, Steven gets the word from Facility Manager Mark Glasson, 56, who gets his orders from the Area Manager.

Of the transition back into professional rugby league, Steven said: "It wasn't easy, because until this year we'd only had casual use, and were spending based on that continuing to be the case."

"However, that had to continue this year because we'd planned it that way. So, we're working on a non-professional budget to manage a professional pitch."

"That meant that, when the Crusaders came in, we didn't have a maintenance plan for topdressing, we just had a basic system in place for weedkilling and the like. So, now it's a matter of getting the funding to up the maintenance."

At this point in the interview, we had our fifth minor interruption, and it became evident how much other work Steven had to do alongside his grounds responsibilities. 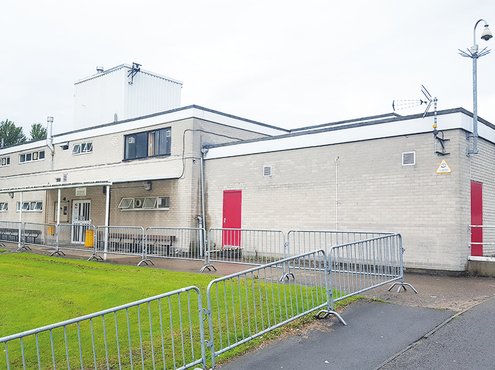 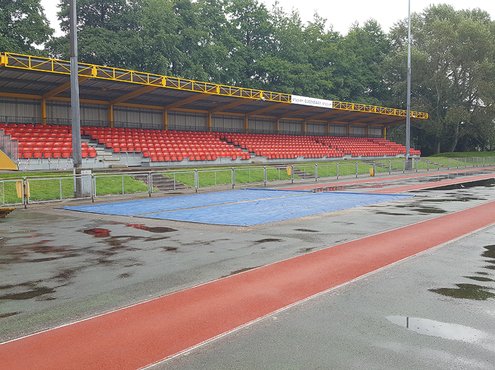 His time deficit comes from his dearth of responsibilities. As well as grounds, he sells memberships, mans the front desk, answers the phone, oversees first aid, general administration and is, essentially, in charge of the office security via CCTV.

Steven said that, in the immediate future, replacing his kit might prove difficult. Some of it is getting a little old, plus they do have trouble finding someone to service it.

However, Steven can do what he calls 'the basics': oil change, filter change and blade replacement. But, he said that the age of the machines can be the difference between somebody being willing to service them and not.

"When we worked for the local authority, they had their own mechanic. So, whenever something happened, the mower or other machinery was sent straight in."

"Freedom are really good with pushing for service contracts. They have good links and find contracts for most things, but we're a bit unlucky because of the age of the machinery."

"If we want anything new, we have to put a really good case in for needing it. It would usually have to fall within the allocated budget anyway."

For some years, Steven has used ALS for most of the stadium's major work, including spraying and renovations. They have also made use of Blakedown, who installed their two 3G pitches, and Slatters, who maintain the artificial surfaces. 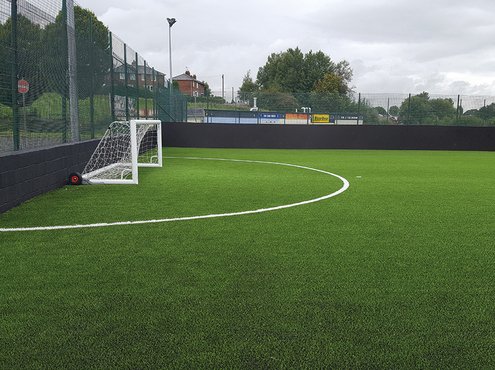 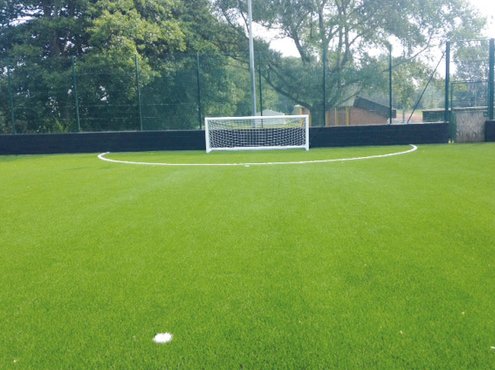 He told of the Celtic Crusaders' final year here and, although they came to the stadium at short notice, extra money was made available because the ground needed to host the very highest level of rugby league.

In this year, the local football team also made it to the Cymru Alliance - the second tier of Welsh football - so, the pitch was also seeing much more use. It was at this point the organisation began to use ALS contractors out of necessity.

Two five-a-side pitches join the main rugby pitch and a public skate park which is attached directly to the car park, and a 400m athletics track which loops around the main pitch.

Steven weeds these areas by hand and brushes the surfaces to keep them tidy. The Welsh junior championships of athletics were recently held on the surfaces.

The athletics track is also pressure-washed, because the large trees bordering the pitch on three sides drop a significant amount of sap, which dries and sets quickly. The shade manages to dodge the grass surface for the most part.

Underneath, the soil is improving. Steven used to topdress with sand every year. Now, it is almost too efficient at draining, however.

The stadium, being built a council-bought venue in 1974, is on an ex-landfill site. The soil has some movement low down, and this occasionally presents itself as undulations in the pitch surface. Topsoil was laid as the entire rootzone, so the quality is sufficient to maintain a playing surface. 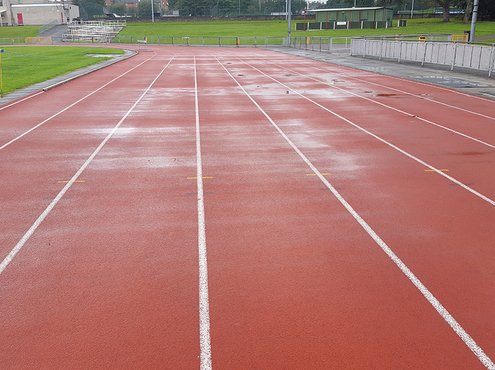 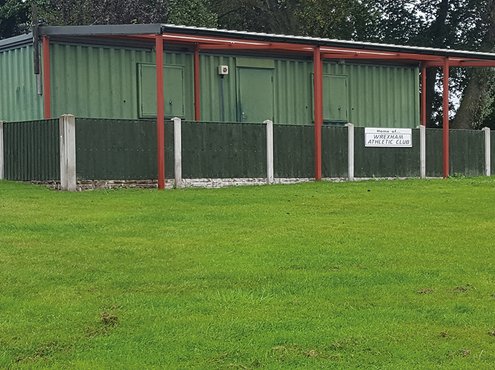 Running through this is a sand-filled drainage system, but this doesn't need to be extensive because of the free-draining nature of the base.

Although the ground runs water so freely, they cannot budget for irrigation, so keeping the turf wet relies on inclement weather. Steven has a sprinkler, but it is saved for emergencies - basically only if the plant is dying from an extended dry spell.

The pitch is technically available for anyone to use when not already booked, and works on the same system as the rest of the facility, taking bookings like any other gym.

What they cannot do is mix sports so, during the rugby league season, they will not allow football on the surface, as the turnaround is too short.

The facility's next major potential project is an outdoor gym. This would be on the old bowls facility which, like the shrubs, was replaced when the staffing situation changed.

The pitch is fertilised in spring and summer with season-specific mixtures, and given a selective weedkiller once per year. Marking out occurs when the lines almost disappear!

The topdressing regime will begin again with the arrival of the Crusaders. It is also verti-drained after this, making each of these processes also annual.

To combat this, Steven uses a SISIS Multi-slitter and a pitchfork to repair any tears that might come about. He then mows with a compact tractor with a rotary deck, because there isn't quite enough time to collect the grass after using the Dennis mower.

The surface suffers occasionally from Welsh chafers, which were sent to the Merit Turf manufacturer. They informed Steven that the life-cycle was different, and so he began a process of nematode introduction.

Since then, the situation has been better, and the 'roughly nine' crows which live within the grounds bother the turf far less than they used to.

This has been effective and proved that, just like the Welsh people, Welsh chafers are resilient in a completely different way to their English counterparts.