by Jane Carley
in Equestrian and People
on 05 Dec 2015

0 Racing ahead with groundcare 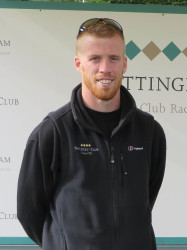 A concerted effort to improve groundcare standards at Nottingham Racecourse has been rewarded with patronage by racing's future stars. Jane Carley talks to Head Groundsman Ron Mason about the changes that have been implemented since he joined the East Midlands venue

Racehorse trainers and racegoers alike are reaping the benefits of an intense focus on groundcare put into practice by a new team at Nottingham Racecourse.

For Head Groundsman Ron Mason, his second stint at the Midlands flat track has a touch of destiny about it: "I started out here as a groundsman, but then moved to Newmarket as Assistant Head Groundsman, working under Director of Racing, Michael Prosser. It was seriously hard work, but I learned such a lot, especially from Newmarket's attention to detail. I knew that I wanted to come back to Nottingham and, when the opportunity arose in 2014 to apply for the Head Groundsman's post, I was ready for the challenge of raising standards here."

And the challenge was an impressive one. Since giving up national hunt racing in 1996, Nottingham has hosted an intensive programme of flat meetings from April to November, rising to twenty-three race days by 2014 when Warwick switched to focusing on Jump racing.

"We race continuously in the flat season, apart from a six week break in early autumn, which gives us a chance to turn the track around and get the racecourse tidied up for the autumn meetings," explains Ron.

Nottingham's track comprises two separate courses, the inner reserved for spring and autumn racing and the outer used in the summer.

The inner track is unusual in that it is rarely irrigated and, with careful management, can present good ground even in October. As a result of this and its flat, galloping nature with no tight turns or steep cambers to unbalance an inexperienced racehorse, Nottingham is favoured hunting ground for leading trainers looking to give their maiden runners a good experience.

"Some of the big names that have raced here include Derby winner Golden Horn, Group One horse Storm the Stars and July Cup winner Dream Ahead," confirms Ron.

Add to this three listed races during the season, and it is easy to see the pressure that Ron and his three-man team are under to produce perfect footing.

"Having the two courses makes life easier as the outer course, which is used for eighteen meetings, gets a good rest in spring and autumn.

We have also carefully plotted rail movements so that we only have to move a certain amount each time, and plan major moves for a gap in the programme where we can bring additional labour in," he comments.

After the move to flat racing, a programme of track improvements was instigated with the whole of the straight drained and sand slit. Five areas were also laser levelled and either reseeded or returfed.

"More recently, we've added additional drainage in wet areas such as the end of the home straight, with more to come this winter on the stands bend where there is some marshy land behind."

Ron comments that contractors Fineturf (Lincolnshire) offer an excellent service at a keen price for drainage and for work such as vertidraining and overseeding.

"We're also looking at the construction of a rubber crumb walkway for the pre-parade ring and we have some great local contractors who we can rely on for this type of work."

Developing a targeted machinery policy has been an important part of Ron's role in his first eighteen months at Nottingham, and switching work such as verti-draining and overseeding in-house, with the necessary investment in equipment, is on the cards.

"It's an area where we always have to make sure we are moving forwards, and we've had the encouragement and support from the management to invest in machinery for the benefit of the course," he explains.

"Where contract services are working well in the interim, we are looking to do as much as possible in-house, including aerating every six to eight weeks rather than once or twice a year as previously."

"We are already seeing the results: agronomy audits confirm that turf roots are thriving, and the sward is suffering less damage, which cuts the need for divoting and repair. We have used 59 tonnes of divot mix in total this year so far, compared to 29 tonnes every two to three weeks previously. Improved aeration and feeding requires investment but can also reduce costs." 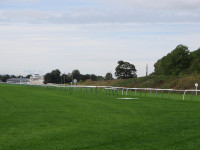 A recent major machinery purchase was a second Briggs irrigator with 24m boom.

"We can now apply 12-15mm per day, which previously took two days, although we still need a tow line on the cambered bend which can't accommodate a boom," explains Ron. "A new inlet from the River Trent has resolved issues with pressure and the hydrants have been refurbished with Bauer connections."

Along with mowing, irrigation is one of the most time consuming tasks for racecourse grounds teams, but Ron suggests that keeping everyone in the loop is crucial.

"We plan well in advance and let the groundstaff know when we are going to be irrigating so that they can prepare for a long day, rather than springing it on them," he says.

"There were cheaper brands of tractor here in the past, but they just don't last, so we are now looking for better quality," comments Ron. 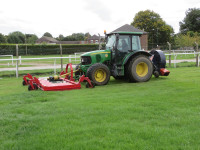 Mowing has also had a serious rethink, with a new Votex 4m front mount mower purchased for 2015 to work alongside a Lastec articulating deck.

"The Votex was a bit of a stop gap and will probably be used mainly for rough areas next year," admits Ron. "It's a very robust mower, but doesn't have the lift we need on the track."

With two tracks to mow, each taking a full day to cut, capacity is at a premium, especially in spring and autumn when the dew necessitates a later start.

Less irrigation means that the inner track only needs cutting once a week in summer, but the course in full use needs two cuts a week.

Ron has calculated that mowing takes 450 man hours each year for the track alone, whilst the rough areas are cut once a week, taking eight hours.

"We're looking at a Progressive TDR-15 triple mower, which with its 5m cut should do both courses in a day. Being rear mounted with rollers behind it also eliminates the need to brush the sward afterwards to stripe it, and the tri-deck design will follow course contours better. Another benefit is the pto drive which will cut servicing costs." 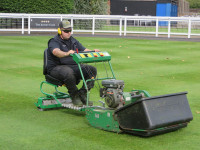 Lawns are maintained with a Dennis G760 cylinder mower, fitted with a trailing seat to increase its output, and the John Deere X740 ride-on used for smaller rough areas and tidying up is due for replacement next year.

Preparations for the racing year begin with a verti-drain in February, followed two to three weeks later by overseeding.

"This year, we only needed to overseed the running lines, bends and heavily used areas," Ron comments.

"We trialed fleecing the bends, which is a technique used at Newmarket, to encourage germination in a cold spring. It's hard work in windy conditions, but definitely makes a difference, so we will do it again."

The track is slit again before racing starts and a light harrow on the summer track pulls debris up and lifts the sward. 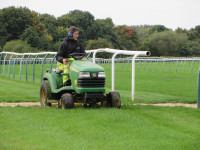 Feeding begins mid-March with a product that offers up to six months' activity from a formulation that is 40% quick start and 60% slow release. "This gave us a wider window for applications and we saw great results in the spring," says Ron.

This allowed the team to apply Headland Xtend at their leisure in June, and to time its application with rainfall, avoiding the need to irrigate. Everris Proturf followed on the outer track in September.

Attention has also turned to improving the public areas, with landscaping and extra seating planned around the hospitality buildings to offer year round colour and a more attractive environment for the many functions hosted outside of racing.

"The front of the racecourse gets battered by the wind, so we try to focus decorative work at the back, although this is north facing, so doesn't get a lot of sun!" 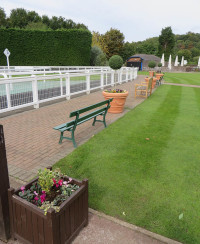 "It's a lot of extra work as we don't have a gardener, but it's worth it," says Ron.

The winter months are taken up with servicing and maintaining kit, and giving every part of the course an overhaul. Stables are painted and refurbished and there is time to focus on all the maintenance jobs that don't happen during the busy racing season.

Ron has an able assistant in the form of Steve Jefferies, the longest standing member of the Nottingham team, and Steve takes a leading role, particularly focusing on track and large machinery maintenance. The team is completed by Robson Holland and Kevin Rothwell. 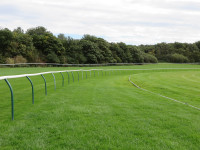 Future projects include upgrading the machinery shed at a cost of £60,000 to include modern wash down facilities. Six furlongs of Fornell rail are also on order to update older sections.

Minor improvements are taking place all the time - Ron casually mentions opening up a crossing point to give more room for the starting stalls so that they can be moved across the track to save ground, and topdressing dips to further improve the surface.

Divot mix has also been tweaked from a 70/30 sand/soil mix to Newbury mix for the summer and a 50/50 White Moss product for the winter.
"The germination is fantastic, although we have had to be careful when using a brush to stripe the track, as it can smear."

"We're constantly aiming to improve everything we do here at Nottingham, and we are pleased with the results so far." 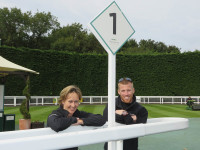 Clerk of the Course Jane Hedley emphasises that Nottingham Racecourse has benefitted from a group-wide initiative across Jockey Club Racecourses to improve standards of groundsmanship.

"There is a strategic focus on investment in the right equipment. A recent restructure has meant that there is now more interaction between the large and small tracks within the group, and Nottingham has certainly benefitted from the input from the highly experienced Newmarket team."

"Our regional Director of Racing, Michael Prosser, had been particularly influential in shaping both my role and Ron's. We are really happy that we have Nottingham in a really good place, both in terms of track and facilities, and race programme."

"The increased focus on the customer facing areas was an initiative almost entirely led by Ron, and we couldn't be more pleased with the results. We've had a great 2015 and are really looking forward to next season and beyond."