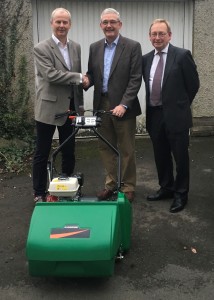 Ransomes has donated a Ransomes Super Bowl pedestrian cylinder mower to Cowbridge Cricket Club located in the Vale of Glamorgan, Wales, after the club became a victim of a burglary.

The club is a not-for-profit members' club with a remit to provide sporting opportunities for the community of Cowbridge and the wider Vale of Glamorgan. Affiliated to CricketWales, the club has produced numerous Wales Juniors players, and currently has two female members in the Wales representative squad.

Having used Ransomes equipment since opening in 1895, Chairman of Cowbridge Cricket Club Hugh Williams wrote to Senior Director of Ransomes, to describe the club's predicament and financial impact upon the organisation.

"Our loss of the Super Bowl was a major blow," Williams said. "We are a not for profit club, and our members work hard to ensure that we are fully financially self-sufficient. The burglary put us in a difficult position as the excess and depreciation of the mower meant that we could not replace the mower like-for-like through our insurance policy.

"The donation made by Ransomes has been an incredibly kind gesture, and it has meant that we have not had to divert funds away from coaching programmes to fund a replacement mower. We have always used Ransomes equipment at Cowbridge, and we are proud of our playing surfaces and the number of high calibre players that have been produced at this club. I can't thank Ransomes enough for the support they have given us during this particularly difficult time."

"When I received the letter from Hugh at Cowbridge Cricket Club, I was deeply concerned by the potentially detrimental effect that the burglary could have had on the club," Alan Prickett commented. "I decided to support the club in the same way that it has supported Ransomes since 1895. It's only a small gesture, but it can often make the world of difference for clubs who rely on the commitment and passion of its members to remain a stalwart of the community."