Ransomes Jacobsen has marked Dmytro 'Mick' Klipalo's 50 years of service at the Ipswich Turf Centre of Excellence with an event to commemorate his time at the company. 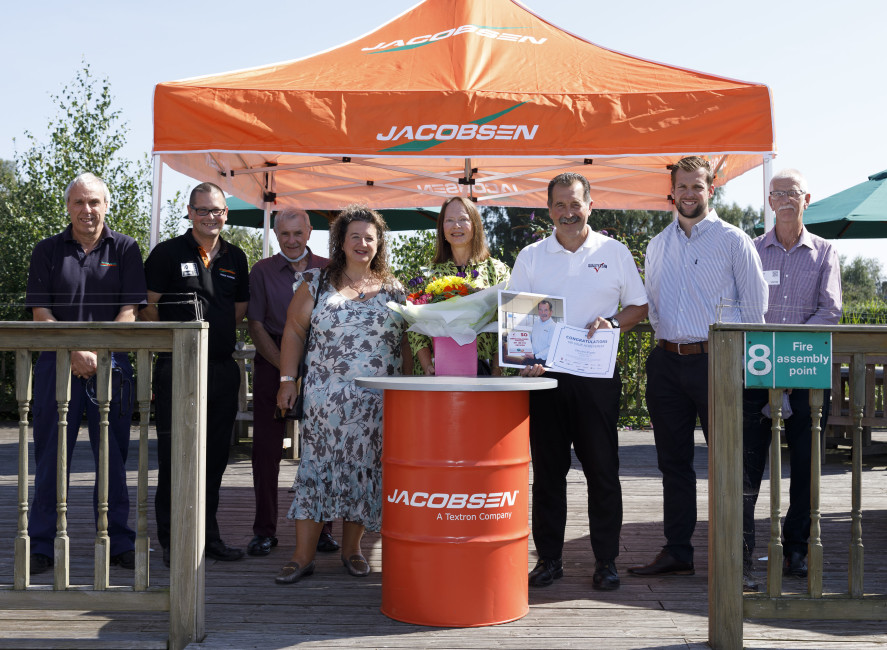 Pictured: Dmytro 'Mick' Klipalo (3rd from right) with his family and Simon Rainger (2nd from left).

Dmytro's family and colleagues gathered at the Ransomes and Jacobsen factory for a surprise celebration, where his outstanding service and contribution was recognised.

Dmytro's father, Peter, moved to England after the Second World War having chosen England as his new adopted home, and it was in Ipswich where he met his wife, Patricia, and had two children, Dmytro and Marika.

In August 1971, when all mower production was moved to the current site in Ipswich, Dmytro joined Ransomes as an apprentice. After completing his apprenticeship, he worked his way through the ranks to become Quality Systems Engineer before taking on his current role as Quality Manager in October 2020.

His time with Ransomes and Jacobsen has coincided with significant company landmarks such as the London 2012 Olympics and the 2018 Ryder Cup at Le Golf National and numerous successful model launches - all of which Dmytro had a hand in preparing machines for.

Speaking about Dmytro's time at the company, Vice President of Turf Simon Rainger said: "Dmytro is part of the fabric of Ransomes Jacobsen, and we are delighted to mark his 50th year here with this celebration.

"In this industry more than most, experience is vital, and we're lucky to have a person working with us who knows so much about the factory, the products and the processes. Dmytro's contribution really has been invaluable to us, and it will continue to be for as long as we have him here.

"I think it's also important to mention his impact on our workplace socially. He's always played in our inter-department five-a-side football tournaments and coached our staff team for the annual match against the Ipswich Town Football Club ground staff. He's always willing to get involved and give up his time, and that's part of what makes Dmytro so popular with everyone here."

Dmytro has worked at Ransomes Jacobsen throughout a transformative time. When he began in the early 1970s, a Ford Cortina cost £968, the Ransomes Ajax just over £14, Intel released the world's first microprocessor, and Texas Instruments released the first ever pocket calculator.

In that time, those different technologies have been amalgamated and have led to pedestrian and ride-on mower technology taking huge steps forward with the introduction of the fully electric Jacobsen Eclipse range and several advancements in engine technology that have led to cleaner running machines.