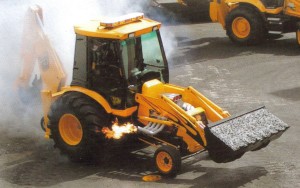 JCB today announced that 2012 was the best year in its 67-year history with earnings reaching a new record.

JCB Chairman Sir Anthony Bamford said: "In view of the continued fragility of the global economy, which has led to renewed slowdowns in emerging and developed markets, JCB's results in 2012 are extremely encouraging. They not only demonstrate the resilience of our business, but highlight the importance of continued investment in products, facilities and customer service.

"While construction equipment markets in many parts of the world remained weak, that has been more than offset by strong growth for our agricultural products, particularly in materials handling. Despite continued uncertainty, particularly in European economies, 2013 has started satisfactorily. We are expecting some growth this year but how much will depend on the pace of the global recovery."

JCB's business in Africa doubled last year and in the Americas it increased by 20 per cent. JCB also saw growth of 12% in the Middle East. In 2012, JCB retained its position as the number one construction equipment manufacturer in the UK, Europe and in India and it remains the number one manufacturer of backhoe loaders and telescopic handlers.

In 2012 JCB opened a new factory in Sao Paulo, Brazil and announced plans for a new £62 million facility in Jaipur, JCB's 4th Indian manufacturing plant, which is due to open in 2014.