0 Renovate Your Renovation with Dennis and SISIS

The Dennis/SISIS Cricket Renovation Day 2018 threw up some challenges the groundspersons present: 'are you missing out on vital modern techniques?' was the gist.

The day, held at Cheltenham College, began with technical talks on renovation and soil core sample analysis by Alex Vickers, the private turf consultant, and Keith Exton, a leading contractor.

Both men outlined the importance of so-called 'bottomdressing', which was no doubt a technique not many in attendance had yet attempted.

As it requires a host of machinery, they organised the soil testing talk for those without the resources to undertake such a task.

Part of what came out of this for most of those involved was an understanding of 'by-eye' soil testing: the ability to spot immediately whether the best course of action is altering aeration regimes, or to simply save up to have a surface Koro.

The variety of soils showed the reality of what small-club cricket groundspersons are up against. A few contained soil without the necessary compaction for stability, and some even had distinct layers of over-compacted loams which were visible from yards away.

A common theme was the ability to identify thatch levels, and it was noted that some had never been taught until that day to identify aged natural material. 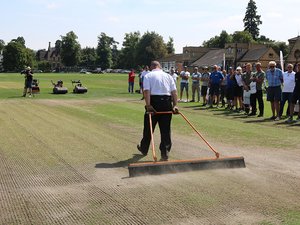 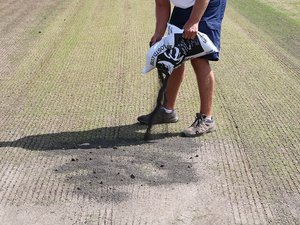 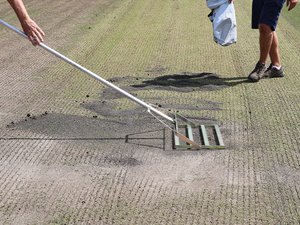 Before the event, Dennis and SISIS sales and marketing manager, Roger Moore, had said: "Following the highly successful seminar held at The Brightside Ground, Bristol in 2017, the decision to return to Gloucestershire was a relatively straightforward one."

"We hope delegates find the event informative, but above all enjoyable." And, indeed, the 2018 edition was a huge success. The team estimated they were providing for around 130 delegates, many of whom gave feedback indicating that they had learnt significantly.

Other topics covered included the compatibility of loams when considering a switch, the increase in fairy ring prevalence, and the inconsistency of profile integrity across the country.

Dennis and SISIS' fleets of machinery also impressed during the afternoon's product demonstrations, with particular interest in the G860, TM1000, and their respective arrays of cassettes.

It was a day of warm sunshine, and Cheltenham College proved to be the ideal location for such an event, with its County-standard square and large assembly halls.

Radley College's experienced head groundsperson, Adam King, attended the event, bringing along most of his grounds team. He feels that these events provide a refreshingly agronomic atmosphere: 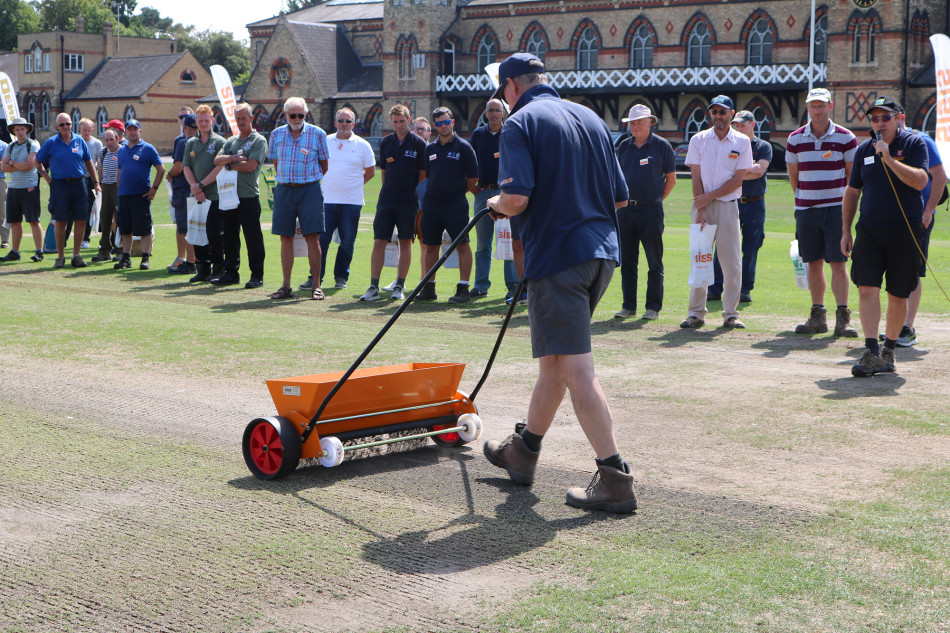 He said: "It's great to have so many of us groundsmen together again in the same place, discussing techniques and the weather."

"It isn't always the case that the content we interact with day-to-day is technical enough to be helpful, and the more experienced guys can suffer for that."

"This, however, is a day of really getting into the science and the best new tools for their jobs, and the guys who organise the day see it primarily as an opportunity to have those discussions."

"I've brought four of my boys along from Radley School. What I most want them to take from the day is what Alex Vickers spoke about this morning."

"That is: the importance of looking at what's going on beneath your square instead of just the top. That was developed later with the inclusion of aeration leading to bottomdressing, and that may be something we head back and discuss doing at Radley."

"Not many of the lads in the mess hall get to come out to these events nowadays, as the associations aren't running them as often." 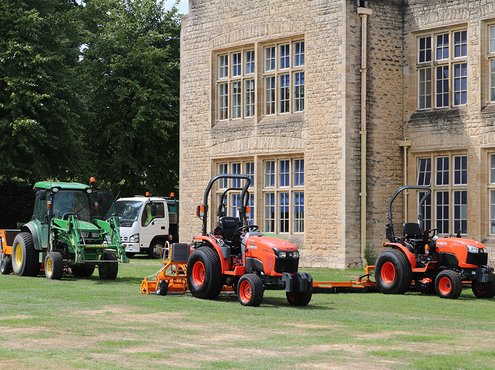 "Cricket renovation is a subject close to everybody's hearts, not only in the cricket-exclusive world, but in the schools too."

"We're always open to new ideas, ways of doing things, and machinery. It's a good place to come and explore, to do some networking, and just catch up with people."

Toby Clarke, a long-time Dennis and SISIS representative, also gave us his feelings on the event: "It's an education day aimed at groundsmen."

"We try to make these events strongly focused on education. It's about the groundsmen coming together and learning from each other as the day goes on."

"We've got two demonstrations going on the cricket squares during the afternoon, and one for the outfield, so everyone can get the chance to see some equipment."

During the talk, Keith had emphasised that these talks are about the groundpersons and their concerns, and his talk was remarkably educational:

"You'll have your problems, as Alex has indicated. You'll have breaks and different loams. But, cricket preparation is all about timing - if you can get the moisture and rolling right, you've done the most important thing."

"Take those core samples. It doesn't have to be a huge sample. Just take a 100mm sample if that's all you can do. See what your moisture content is. In a cricket environment, that moisture content is the most important thing you can control - full stop."

"Often, you'll spot something late, and phone up consultants late. That's what we're here for. It feels, most of the time, like you're the only club in the world." 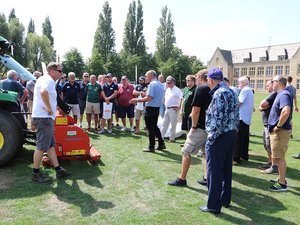 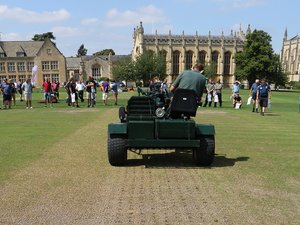