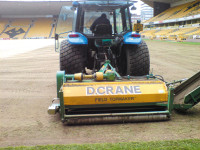 Wolverhampton Wanderers FC has recently been sold for a tenner to businessman Steve Morgan under the pre-requisite to the former owner, Sir Jack Hayward, that £30 million will be pumped into the club. No doubt the money will be wisely spent, maybe even on a new pitch at some point but, for now, the purse strings are as tightly drawn as ever and so they should be.

For the second year running the Groundstaff (Terry, Wayne and Ken) undertook much of the renovation works themselves. After a season of monitoring how the stadium and training ground pitches had played, specifications were drawn up by PSD (Northwest) Ltd.

In particular, the very wet winter had highlighted the poor drainage that predominates the Billy Wright wing of the stadium pitch, so 500 linear metres of additional drains were to be installed along with sand banding across approximately 1500 square metres.

Having been impressed with the quality of work and flexibility of contractor Derek Crane, it was decided to stay with him again this year, so tenders weren't issued out to anybody else. After the inevitable 'up in the air' end to the playing season finally panned out, work started at the Compton training ground.

The pitch was then hollow cored to a 100mm depth at 50mm centres, a monotonous job that, at 14 minutes a run, took over 13 hours to complete!

Once done, this enabled the pitch to be topdressed with 80 tons of MM45 sand and then seeded with 350kgs of BAR 7. 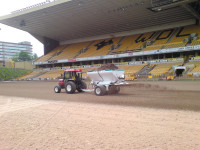 The Dakota top dresser and Vredo disc seeder had been hired, via Derek Crane, from Campey Turf Care and made the Groundstaff jobs much easier to undertake. The Dakota took about 5 tons of material each load and was filled quickly and comfortably using a small 2-ton hired Bobcat. The spread of the material could be adjusted electronically from a control box that was wired into the tractor cab.

The control box could adjust the speed of the conveyor belt inside the hopper as well as the spinning discs that threw out the material. Within a load or two, it was possible to gauge the equipment so as to discharge all of the material in two full runs of the pitch. When topdressing large quantities of material, it is important that you can spread the material evenly, as well as quickly. The Dakota hopper trails the tractor and sits on four wide tyres that almost touch each other, spreading the weight evenly and not leaving any ruts in the pitch surface.

The first thing that impressed us about the Vredo seeder was the fact that there was hardly a grain of seed left showing on the surface. Like many grounds across the country, we usually get a deluge of pigeons feeding themselves to bursting on the excess seed left on the surface. This year not one bird has been seen grazing on 'free' seed. The machine can be set to place the seed at any given depth between 0-25mm, and we chose to seed to a depth of 15mm for the dwarf perennial ryes. The discs are set at 50mm centres so each of the pitches seeded had a minimum of four passes in different directions to make sure we got good coverage.

The youth team pitch, once dressed and seeded, was vertidrained at 100mm centres to a depth of 200mm before the area was dragmatted and then fertilised with 250kgs of Sportsmaster 8:12:8 + magnesium. 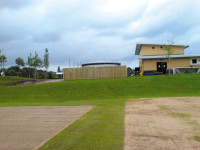 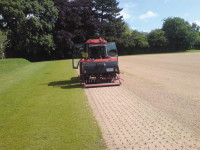 The Crane staff had moved onto the reserve team pitch to Koro off the top 15mm. There are three main pitches at the Compton training ground and we have a three-year rolling plan of turning over one pitch each year. Once the surface was cleaned of vegetation 120 tons of MM45 was evenly spread as well as 20 cubic metres of concentrated fibresand through the middle third of the pitch. This was then power harrowed to a depth of 75mm, incorporating the spread materials into the upper rootzone. At the same time 300kgs of controlled release 21:0:20 was spread and mixed into the profile.

The area was graded and rolled a number of times to get the surface flat and consolidated in readiness for the seeding. A Blec slot seeder was used for this, as it wouldn't disrupt the prepared surface. After seeding, a light roller was used to close the seed slots and an application of 8:12:8 pre-seed fertiliser spread to finish the job.

The first team pitch was fraize mowed and the works carried out as per the youth team pitch. The only change to that specification was that the pitch was double vertidrained instead of a hollow coring operation. It is constructed with a fibre sand profile and hollow coring doesn't tend to work very well with fibre, the tines tending to clog with fibre and inevitably end up doing the same job as solid tines.

With the training ground completed, everybody moved their attention (and equipment) to Molineux. The first job was to ascertain where the undersoil pipes were located in the ground so that drainage trenches could be dug. Easier said than done! Half a day was spent excavating inspection holes at various locations to find the pipes and the direction in which they followed. The pipes were, originally, supposed to have been inserted at 300mm centres but had moved in the lower profile over the years and were variable across the pitch. 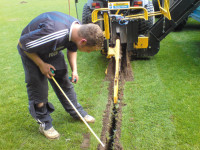 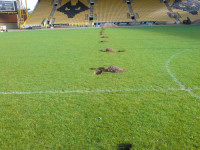 The upshot of this was that the trencher managed to chew through seven heating pipes as twenty-eight, thirty metre long trenches were dug. As a pipe was broken the trench filled quickly with water. The cut ends had to be sealed using clamps to stop the flow of water before the trench could be drained and the pipe repaired. Each end of the pipe had to be cleaned and cut square before a new length of 25mm pipe could be inserted and connected to repair the damage.

These 500mm deep trenches were excavated along to an existing main drain, increasing our drainage on the west side of the pitch to pipes at minimum 5 metre centres. 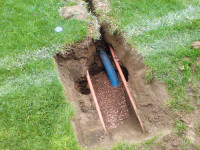 The broken heating pipes were repaired and the 80mm perforated pipes laid in shingle to a 1:100 fall back to the main drain. The shingle was brought up to within 150mm from the surface and capped with a grit layer of 50mm before 70/30 rootzone was consolidated in the trench to the surface. The ends of the drainage pipes were connected into the main 110mm drain with pipe connectors before the holes were backfilled with shingle and rootzone to the top.

With all the pipes installed, and the surface levels reinstated, the pitch vegetation was Koroed off to a depth of 15mm. 200 tons of 80:20 rootzone was spread evenly to bring the levels back up, as well as 20 cubic metres of concentrated fibresand through the middle of the pitch area.

300kgs of controlled release fertiliser and 250kgs of 8:12:8 pre-seed fertiliser was spread over the rootzone prior to the whole area being power harrowed to a depth of 100mm. The power harrowing does a much better, and more even, job of mixing the materials than traditional rotovators which tend to cause problems at the start and finish of each run. Two passes were made using this machinery before levels were addressed and the surface rolled to consolidate the aerated ground.

Twenty tons of specified drainage sand was used through a Blec sand-slitting machine along a designated area of 1500 square metres. This area along the west wing of the pitch was slit over the top of, and at 90 degrees to, the newly laid drainage pipes. Sand slits were installed to a depth of 150mm deep, so they were installed to connect completely with the drain lines.

With the May bank holiday weekend upon us, the weather was now not helping and we needed to get the finished levels right prior to seeding. However, the heavens really opened up on the Sunday and it was impossible to finish the work. On the Monday we continued rolling, using a water ballasted roller to firm the ground and iron out any tyre marks left in the surface. The direction for rolling changed slightly with each pass, but the rain clouds had assembled overhead and with the rain falling heavily again, any thoughts of finishing the job had gone. 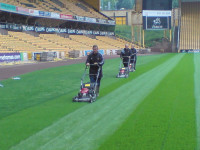 On the Tuesday morning, with no comfort in the weather forecast, it was felt that we weren't able to improve more on the levels without dry weather and that it was better to get the seed in the ground. That decision was based on the fact that a few light tyre marks could be top-dressed out during the summer once grass is established.

350kgs of BAR 7 seed was used, put down with two passes using the slot seeder. There wasn't time to allow for a light roll afterwards before persistent rain set in again.

However, the combination of warm days, high soil temperatures (for the time of year) and the rainfall aided very quick germination of the seed. It was interesting to see the main four pitches all coming though at stepped intervals in line with when they were seeded. On each pitch, germination was within five to six days and, a week or two on, the coverage is near on 100%. The seeding operations, using the Vredo disc seeder on existing surfaces, and the Blec slot seeder on newly tilthed surfaces have worked well, giving us an excellent start to the summer programme of re-establishment.